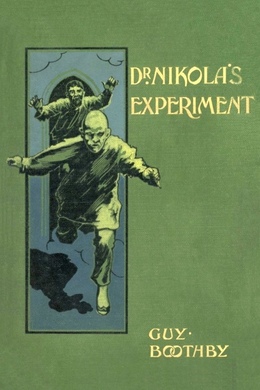 The nefarious and wealthy Nikola has purchased a remote castle in the north of England, where the seclusion will allow him and his new assistant and Nikola’s deaf-mute malformed Chinese servant to conduct his grand experiment on a human subject – the doctor has discovered all of the facts necessary to extend a human being’s life, while studying the science and magic secrets of Tibetan monks.

It is sad enough at any time for a man to be compelled to confess himself a failure, but I think it will be admitted that it is doubly so at that period of his career when he is still young enough to have some flickering sparks of ambition left, while he is old enough to be able to appreciate at their proper value the overwhelming odds against which he has been battling so long and unsuccessfully.

This was unfortunately my condition. I had entered the medical profession with everything in my favour. My father had built up a considerable reputation for himself, and, what he prized still more, a competency as a country practitioner of the old-fashioned sort in the west of England. I was his only child, and, as he was in the habit of saying, he looked to me to carry the family name up to those dizzy heights at which he had often gazed, but upon which he had never quite been able to set his foot. A surgeon I was to be, willy-nilly, and it may have been a throw-back to the parental instinct alluded to above, that led me at once to picture myself flying at express speed across Europe in obedience to the summons of some potentate whose life and throne depended upon my dexterity and knowledge.

In due course I entered a hospital, and followed the curriculum in the orthodox fashion. It was not, however, until I was approaching the end of my student days that I was burnt with that fire of enthusiasm which was destined in future days to come perilously near consuming me altogether. Among the students of my year was a man by whose side I had often worked—with whom I had occasionally exchanged a few words, but whose intimate I could not in any way have been said to be. In appearance he was a narrow-shouldered, cadaverous, lantern-jawed fellow, with dark, restless eyes, who boasted the name of Kelleran, and was popularly supposed to be an Irishman. As I discovered later, however, he was not an Irishman at all, but hailed from the Black Country—Wolverhampton, if I remember rightly, having the right to claim the honour of his birth. His father had been the senior partner in an exceedingly wealthy firm of hardware manufacturers, and while we had been in the habit of pitying and, in some instances I am afraid, of looking down upon the son on account of his supposed poverty, he was, in all probability, in a position to buy up every other man in the hospital twice over.

The average medical student is a being with whom the world in general has by this time been made fairly familiar. His frolics and capacity—or incapacity, as you may choose to term it—for work have been the subject of innumerable jests. If this be a true picture, then Kelleran was certainly different to the usual run of us. In his case the order was reversed: with him, work was play, and play was work; a jest was a thing unknown, and a practical joke a thing for which he allowed it to be seen that he had not the slightest tolerance.

I have already said that my father had amassed a competency. I must now add that up to a certain point he was a generous man, and for this reason my allowance, under different circumstances, would have been ample for my requirements. As ill luck would have it, however, I had got into the wrong set, and before I had been two years in the hospital was over head and ears in such a quagmire of debt and difficulties that it looked as if nothing but an absolute miracle could serve to extricate me. To my father I dared not apply: easy-going as he was on most matters, I had good reason to know that on the subject of debt he was inexorable. And yet to remain in my present condition was impossible. On every side tradesmen threatened me; my landlady’s account had not been paid for weeks; while among the men of the hospital not one, but several, held my paper for sums lost at cards, the mere remembrance of which was sufficient to send a cold shiver coursing down my back every time I thought of them. From all this it will be surmised that my position was not only one of considerable difficulty but that it was also one of no little danger. Unless I could find a sum either to free myself, or at least to stave off my creditors, my career, as far as the world of medicine was concerned, might be considered at an end. Even now I can recall the horror of that period as vividly as if it were but yesterday.