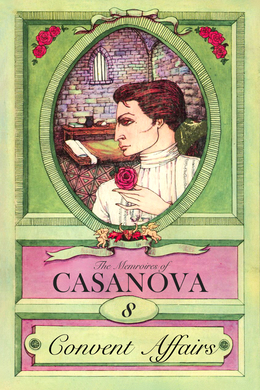 Episode 8 of Cassanova’s escapades, starts with a meeting of Countess Coronini – a Lover’s Pique – Reconciliation – The First Meeting – a Philosophical Parenthesis. A scholar, an adventurer, perhaps a Cabalist, a busy stirrer in politics, a gamester, one born for the fairer sex, as he tells us, and born also to be a vagabond; this man, who is remembered now for his written account of his own life, was that rarest kind of autobiographer, one who did not live to write, but wrote because he had lived…

My beautiful nun had not spoken to me, and I was glad of it, for I was so astonished, so completely under the spell of her beauty, that I might have given her a very poor opinion of my intelligence by the rambling answers which I should very likely have given to her questions. I knew her to be certain that she had not to fear the humiliation of a refusal from me, but I admired her courage in running the risk of it in her position. I could hardly understand her boldness, and I could not conceive how she contrived to enjoy so much liberty. A casino at Muran! the possibility of going to Venice to sup with a young man! It was all very surprising, and I decided in my own mind that she had an acknowledged lover whose pleasure it was to make her happy by satisfying her caprices. It is true that such a thought was rather unpleasant to my pride, but there was too much piquancy in the adventure, the heroine of it was too attractive, for me to be stopped by any considerations. I saw very well that I was taking the high road to become unfaithful to my dear C—- C—-, or rather that I was already so in thought and will, but I must confess that, in spite of all my love for that charming child, I felt no qualms of conscience. It seemed to me that an infidelity of that sort, if she ever heard of it, would not displease her, for that short excursion on strange ground would only keep me alive and in good condition for her, because it would save me from the weariness which was surely killing me.

I had been presented to the celebrated Countess Coronini by a nun, a relative of M. Dandolo. That countess, who had been very handsome and was very witty, having made up her mind to renounce the political intrigues which had been the study of her whole life, had sought a retreat in the Convent of St. Justine, in the hope of finding in that refuge the calm which she wanted, and which her disgust of society had rendered necessary to her. As she had enjoyed a very great reputation, she was still visited at the convent by all the foreign ambassadors and by the first noblemen of Venice; inside of the walls of her convent the countess was acquainted with everything that happened in the city. She always received me very kindly, and, treating me as a young man, she took pleasure in giving me, every time I called on her, very agreeable lessons in morals. Being quite certain to find out from her, with a little manoeuvering, something concerning M—- M—-, I decided on paying her a visit the day after I had seen the beautiful nun.

The countess gave me her usual welcome, and, after the thousand nothings which it is the custom to utter in society before anything worth saying is spoken, I led the conversation up to the convents of Venice. We spoke of the wit and influence of a nun called Celsi, who, although ugly, had an immense credit everywhere and in everything. We mentioned afterwards the young and lovely Sister Michali, who had taken the veil to prove to her mother that she was superior to her in intelligence and wit. After speaking of several other nuns who had the reputation of being addicted to gallantry, I named M—- M—-, remarking that most likely she deserved that reputation likewise, but that she was an enigma. The countess answered with a smile that she was not an enigma for everybody, although she was necessarily so for most people.

“What is incomprehensible,” she said, “is the caprice that she took suddenly to become a nun, being handsome, rich, free, well-educated, full of wit, and, to my knowledge, a Free-thinker. She took the veil without any reason, physical or moral; it was a mere caprice.”

“Do you believe her to be happy, madam?”

“Yes, unless she has repented her decision, or if she does not repent it some day. But if ever she does, I think she will be wise enough never to say so to anyone.”

Satisfied by the mysterious air of the countess that M—- M—- had a lover, I made up my mind not to trouble myself about it, and having put on my mask I went to Muran in the afternoon. When I reached the gate of the convent I rang the bell, and with an anxious heart I asked for M—- M—- in the name of Madame de S—-. The small parlour being closed, the attendant pointed out to me the one in which I had to go. I went in, took off my mask, and sat down waiting for my divinity.