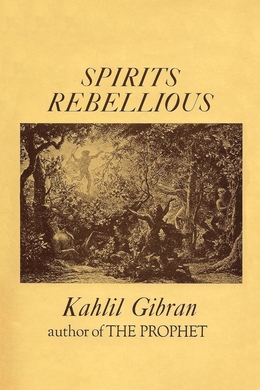 When first published in the original Arabic, this book aroused considerable agitation and intrigue. It was burned publicly in the Beirut market place by furious church and state officials, who denounced it as poisonous and dangerous to the peace of the country. Gibran himself was exiled. But this was at a time when Lebanon was in virtual slavery to oppressive Turkish rule.Years later his exile was remanded, and the church embraced him without conciliation on his part. Yet the record remains as Gibran wrote it here: his profoundly felt anger and indignant protest at the vicious inequality of man and woman in marriage - the wretched failure of the principles of law and justice and the corrupt, thieving practices of religious administration in the Near East of his time.

A few days thereafter I met Madame Rose Hanie for the first time, in a poor hovel, surrounded by flowers and trees. She had heard of me through Rashid Bey Namaan, the man whose heart she had crushed and stamped upon and left under the terrible hoofs of Life. As I looked at her beautiful bright eyes, and heard her sincere voice, I said to myself, “Can this be the sordid woman? Can this clear face hide an ugly soul and a criminal heart? Is this the unfaithful wife? Is this the woman of whom I have spoken evil and imagined as a serpent disguised in the form of a beautiful bird?” Then I whispered again to myself saying, “Is it this beautiful face that made Rashid Bey Namaan miserable? Haven’t we heard that obvious beauty is the cause of many hidden distresses and deep suffering? Is not the beautiful moon, that inspires the poets, the same moon that angers the silence of the sea with a terrible roar?”

As we seated ourselves, Madame Rose Hanie seemed to have heard and read my thoughts and wanted not to prolong my doubts. She leaned her beautiful head upon her hands and with a voice sweeter than the sound of the lyre, she said, “I have never met you, but I heard the echoes of your thoughts and dreams from the mouths of the people, and they convinced me that you are merciful and have understanding for the oppressed woman - the woman whose heart’s secrets you have discovered and whose affections you have known. Allow me to reveal to you the full contents of my heart so you may know that Rose Hanie never was an unfaithful woman.

“I was scarcely eighteen years of age when fate led me to Rashid Bey Namaan, who was then forty years old. He fell in love with me, according to what the people say, and took me for a wife and put me in his magnificent home, placing at my disposal clothes and precious gems. He exhibited me as a strange rarity at the homes of his friends and family; he smiled with triumph when he saw his contemporaries looking at me with surprise and admiration; he lifted his chin high with pride when he heard the ladies speak of me with praise and affection. But never could he hear the whispers, ‘Is this the wife of Rashid Bey Namaan, or his adopted daughter?’ And another one commenting, ‘If he had married at the proper age, his first born would have been older than Rose Hanie.’

“All that happened before my life had awakened from the deep swoon of youth, and before God inflamed my heart with the torch of love, and before the growth of the seeds of my affections. Yes, all this transpired during the time when I believed that real happiness came through beautiful clothes and magnificent mansions. When I woke up from the slumber of childhood, I felt the flames of sacred fire burning in my heart, and a spiritual hunger gnawing at my soul, making it suffer. When I opened my eyes, I found my wings moving to the right and left, trying to ascend into the spacious firmament of love, but shivering and dropping under the gusts of the shackles of laws that bound my body to a man before I knew the true meaning of that law. I felt all these things and knew that a woman’s happiness does not come through man’s glory and honour, nor through his generosity and affection, but through love that unites both of their hearts and affections, making them one member of life’s body and one word upon the lips of God. When Truth showed herself to me, I found myself imprisoned by law in the mansion of Rashid Bey Namaan, like a thief stealing his bread and hiding in the dark and friendly corners of the night. I knew that every hour spent with him was a terrible lie written upon my forehead with letters of fire before heaven and earth. I could not give him my love and affection in reward for his generosity and sincerity. I tried in vain to love him, but love is a power that makes our hearts, yet our hearts cannot make that power. I prayed and prayed in the silence of the night before God to create in the depths of my heart a spiritual attachment that would carry me closer to the man who had been chosen for me as a companion through life.

“My prayers were not granted, because Love descends upon our souls by the will of God and not by the demand or the plea of the individual. Thus I remained for two years in the home of that man, envying the birds of the field their freedom while my friends envied me my painful chains of gold. I was like a woman who is torn from her only child; like a lamenting heart, existing without attachment; like an innocent victim of the severity of human law. I was close to death from spiritual thirst and hunger.