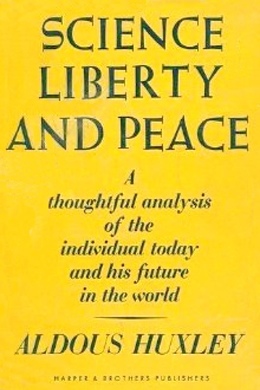 An essay written by Aldous Huxley, published in 1946. The essay is an opinionated discussion covering a wide range of subjects reflecting Huxley’s views towards society at that time. He puts forward a number of predictions, many of which turned out to be true up to 60 years later. A consistent theme throughout the essay is Huxley’s preference towards a decentralised society. (source: Wikipedia)

‘If the arrangement of society is bad (as ours is), and a small number of people have power over the majority and oppress it, every victory over Nature will inevitably serve only to increase that power and that oppression. This is what is actually happening.’

It is nearly half a century since Tolstoy wrote these words, and what was happening then has gone on happening ever since. Science and technology have made notable advances in the intervening years—and so has the centralization of political and economic power, so have oligarchy and despotism. It need hardly be added that science is not the only causative factor involved in this process. No social evil can possibly have only one cause. Hence the difficulty, in any given case, of finding a complete cure. All that is being maintained here is that progressive science is one of the causative factors involved in the progressive decline of liberty and the progressive centralization of power, which have occurred during the twentieth century.

Applied science touches the lives of individuals and societies at many different points and in a great variety of contexts, and therefore the ways in which it has increased the power of the few over the majority are correspondingly many and various. In the paragraphs that follow I shall enumerate the more obviously significant of these ways, shall indicate how and by what means applied science has contributed hitherto toward the centralization of power in the hands of a small ruling minority, and also how and by what means such tendencies may be resisted and ultimately, perhaps, reversed.

Overwhelming scientific and technological superiority cannot be resisted on their own plane. In 1848 the sporting gun was a match for the muskets of the soldiery, and a barricade made of overturned carts, sandbags and paving stones was a sufficient protection against cavalry and muzzle-loading cannon. After a century of scientific and technological progress no weapons available to the masses of the people can compete with those in the arsenals controlled by the ruling minority. Consequently, if any resistance is to be offered by the many to the few, it must be offered in a field in which technological superiority does not count. In countries where democratic institutions exist and the executive is prepared to abide by the rules of the democratic game, the many can protect themselves against the ruling few by using their right to vote, to strike, to organize pressure groups, to petition the legislature, to hold meetings and conduct press campaigns in favour of reform. But where there are no democratic institutions, or where a hitherto democratic government declines any longer to abide by the rules of the game, a majority which feels itself oppressed may be driven to resort to direct action. But since science and technology, in conquering nature have thereby enormously increased the military and police power of the ruling few, this direct action cannot hope for a successful outcome, if it is violent; for in any armed conflict, the side which has the tanks, planes and flame-throwers cannot fail to defeat the side which is armed at the very best only with small arms and hand grenades.