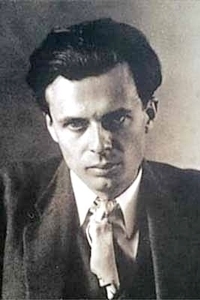 Aldous Huxley was an English writer and one of the most prominent members of the famous Huxley family. He spent the later part of his life in the United States, living in Los Angeles from 1937 until his death in 1963. Best known for his novels and wide-ranging output of essays, he also published short stories, poetry, travel writing, and film stories and scripts. Huxley was a humanist and pacifist, but was also latterly interested in spiritual subjects such as parapsychology and philosophical mysticism. He was also well known for advocating and taking psychedelics. By the end of his life Huxley was considered, in some academic circles, a leader of modern thought and an intellectual of the highest rank. (source: Wikipedia)

When inspiration leads Theodore Gumbril to design a type of pneumatic trouser to ease the discomfort of sedentary life, he decides the time has come to ...read more »

Far in the future, the World Controllers have created the ideal society. Through clever use of genetic engineering, brainwashing and recreational sex an...read more »

When the novel Brave New World first appeared in 1932, its shocking analysis of a scientific dictatorship seemed a projection into the remote future. He...read more »

This collection of Huxley short stories contains After the Fireworks which is the length of a short novel and deals with the predicament of a well-known...read more »

On vacation from school, Denis goes to stay at Crome, an English country house inhabitated by several of Huxley’s most outlandish characters–from Mr. Ba...read more »

Anthony Beavis is a man inclined to recoil from life. His past is haunted by the death of his best friend Brian and by his entanglement with the cynical...read more »

In 1953, in the presence of an investigator, Aldous Huxley took four-tenths of a gramme of mescalin, sat down and waited to see what would happen. When ...read more »

For over a hundred years the Pacific island of Pala has been the scene of a unique experiment in civilisation. Its inhabitants live in a society where w...read more »

In Leda, Aldous Huxley is back in the old smooth, mythological world, consecrated by a thousand poets. He pays occasional tribute to ugly fact in the co...read more »

Huxley’s first collection of short stories contains seven visionary and satirical tales, which introduces themes that will go on to form the basis of hi...read more »

Mortal Coils is the famous book of short stories (and a play) by Aldous Huxley. Mortal Coils includes the following stories: The Gioconda Smile Permutat...read more »

An essay written by Aldous Huxley, published in 1946. The essay is an opinionated discussion covering a wide range of subjects reflecting Huxley’s views...read more »

In 1634 Urbain Grandier, a handsome and dissolute priest of the parish of Loudun was tried, tortured and burnt at the stake. He had been found guilty of...read more »

‘The man who comes back through the Door in the Wall will never be quite the same as the man who went out’. Aldous Huxley first took mescalin in 1953 an...read more »

Huxley spares no one in his ironic, piercing portrayal of a group gathered in an Italian palace by the socially ambitious and self-professed lover of ar...read more »