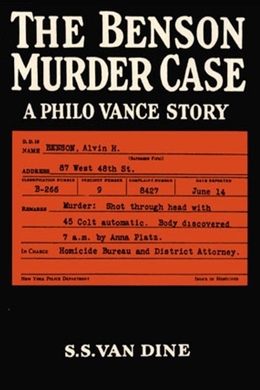 Playboy stockbroker, Alvin Benson, is found in his brownstone mansion with a bullet through his head. First on the scene is Philo Vance, amateur detective, who is at once intrigued by the absence of Alvin’s toupee and his false teeth. With a jigsaw of odd clues he sets off in pursuit of an elusive murderer, making obvious his disdain for the professional crime-solvers of the police and the DA’s office. To him, they seem to be hopelessly addicted to the pernicious practice of looking for physical clues and circumstantial evidence. His own theory is that psychology is the key.

It happened that, on the morning of the momentous June the fourteenth when the discovery of the murdered body of Alvin H. Benson created a sensation which, to this day, has not entirely died away, I had breakfasted with Philo Vance in his apartment. It was not unusual for me to share Vance’s luncheons and dinners, but to have breakfast with him was something of an occasion. He was a late riser, and it was his habit to remain incommunicado until his midday meal.

The reason for this early meeting was a matter of business—or, rather, of æsthetics. On the afternoon of the previous day Vance had attended a preview of Vollard’s collection of Cézanne water-colors at the Kessler Galleries, and having seen several pictures he particularly wanted, he had invited me to an early breakfast to give me instructions regarding their purchase.

A word concerning my relationship with Vance is necessary to clarify my rôle of narrator in this chronicle. The legal tradition is deeply imbedded in my family, and when my preparatory-school days were over, I was sent, almost as a matter of course, to Harvard to study law. It was there I met Vance, a reserved, cynical and caustic freshman who was the bane of his professors and the fear of his fellow-classmen. Why he should have chosen me, of all the students at the University, for his extra-scholastic association, I have never been able to understand fully. My own liking for Vance was simply explained: he fascinated and interested me, and supplied me with a novel kind of intellectual diversion. In his liking for me, however, no such basis of appeal was present. I was (and am now) a commonplace fellow, possessed of a conservative and rather conventional mind. But, at least, my mentality was not rigid, and the ponderosity of the legal procedure did not impress me greatly—which is why, no doubt, I had little taste for my inherited profession—; and it is possible that these traits found certain affinities in Vance’s unconscious mind. There is, to be sure, the less consoling explanation that I appealed to Vance as a kind of foil, or anchorage, and that he sensed in my nature a complementary antithesis to his own. But whatever the explanation, we were much together; and, as the years went by, that association ripened into an inseparable friendship.

Upon graduation I entered my father’s law firm—Van Dine and Davis—and after five years of dull apprenticeship I was taken into the firm as the junior partner. At present I am the second Van Dine of Van Dine, Davis and Van Dine, with offices at 120 Broadway. At about the time my name first appeared on the letter-heads of the firm, Vance returned from Europe, where he had been living during my legal novitiate, and, an aunt of his having died and made him her principal beneficiary, I was called upon to discharge the technical obligations involved in putting him in possession of his inherited property.

This work was the beginning of a new and somewhat unusual relationship between us. Vance had a strong distaste for any kind of business transaction, and in time I became the custodian of all his monetary interests and his agent at large. I found that his affairs were various enough to occupy as much of my time as I cared to give to legal matters, and as Vance was able to indulge the luxury of having a personal legal factotum, so to speak, I permanently closed my desk at the office, and devoted myself exclusively to his needs and whims.

If, up to the time when Vance summoned me to discuss the purchase of the Cézannes, I had harbored any secret or repressed regrets for having deprived the firm of Van Dine, Davis and Van Dine of my modest legal talents, they were permanently banished on that eventful morning; for, beginning with the notorious Benson murder, and extending over a period of nearly four years, it was my privilege to be a spectator of what I believe was the most amazing series of criminal cases that ever passed before the eyes of a young lawyer. Indeed, the grim dramas I witnessed during that period constitute one of the most astonishing secret documents in the police history of this country.

Of these dramas Vance was the central character. By an analytical and interpretative process which, as far as I know, has never before been applied to criminal activities, he succeeded in solving many of the important crimes on which both the police and the District Attorney’s office had hopelessly fallen down.