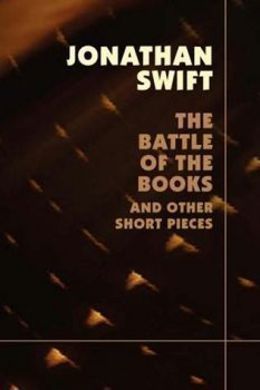 The Battle of the Books

and Other Short Pieces

While things were in this ferment, discord grew extremely high; hot words passed on both sides, and ill blood was plentifully bred. Here a solitary Ancient, squeezed up among a whole shelf of Moderns, offered fairly to dispute the case, and to prove by manifest reason that the priority was due to them from long possession, and in regard of their prudence, antiquity, and, above all, their great merits toward the Moderns.

Whoever examines, with due circumspection, into the annual records of time, will find it remarked that War is the child of Pride, and Pride the daughter of Riches:—the former of which assertions may be soon granted, but one cannot so easily subscribe to the latter; for Pride is nearly related to Beggary and Want, either by father or mother, and sometimes by both: and, to speak naturally, it very seldom happens among men to fall out when all have enough; invasions usually travelling from north to south, that is to say, from poverty to plenty. The most ancient and natural grounds of quarrels are lust and avarice; which, though we may allow to be brethren, or collateral branches of pride, are certainly the issues of want. For, to speak in the phrase of writers upon politics, we may observe in the republic of dogs, which in its original seems to be an institution of the many, that the whole state is ever in the profoundest peace after a full meal; and that civil broils arise among them when it happens for one great bone to be seized on by some leading dog, who either divides it among the few, and then it falls to an oligarchy, or keeps it to himself, and then it runs up to a tyranny. The same reasoning also holds place among them in those dissensions we behold upon a turgescency in any of their females. For the right of possession lying in common (it being impossible to establish a property in so delicate a case), jealousies and suspicions do so abound, that the whole commonwealth of that street is reduced to a manifest state of war, of every citizen against every citizen, till some one of more courage, conduct, or fortune than the rest seizes and enjoys the prize: upon which naturally arises plenty of heart–burning, and envy, and snarling against the happy dog. Again, if we look upon any of these republics engaged in a foreign war, either of invasion or defence, we shall find the same reasoning will serve as to the grounds and occasions of each; and that poverty or want, in some degree or other (whether real or in opinion, which makes no alteration in the case), has a great share, as well as pride, on the part of the aggressor.

Now whoever will please to take this scheme, and either reduce or adapt it to an intellectual state or commonwealth of learning, will soon discover the first ground of disagreement between the two great parties at this time in arms, and may form just conclusions upon the merits of either cause. But the issue or events of this war are not so easy to conjecture at; for the present quarrel is so inflamed by the warm heads of either faction, and the pretensions somewhere or other so exorbitant, as not to admit the least overtures of accommodation. This quarrel first began, as I have heard it affirmed by an old dweller in the neighbourhood, about a small spot of ground, lying and being upon one of the two tops of the hill Parnassus; the highest and largest of which had, it seems, been time out of mind in quiet possession of certain tenants, called the Ancients; and the other was held by the Moderns. But these disliking their present station, sent certain ambassadors to the Ancients, complaining of a great nuisance; how the height of that part of Parnassus quite spoiled the prospect of theirs, especially towards the east; and therefore, to avoid a war, offered them the choice of this alternative, either that the Ancients would please to remove themselves and their effects down to the lower summit, which the Moderns would graciously surrender to them, and advance into their place; or else the said Ancients will give leave to the Moderns to come with shovels and mattocks, and level the said hill as low as they shall think it convenient. To which the Ancients made answer, how little they expected such a message as this from a colony whom they had admitted, out of their own free grace, to so near a neighbourhood. That, as to their own seat, they were aborigines of it, and therefore to talk with them of a removal or surrender was a language they did not understand. That if the height of the hill on their side shortened the prospect of the Moderns, it was a disadvantage they could not help; but desired them to consider whether that injury (if it be any) were not largely recompensed by the shade and shelter it afforded them. That as to the levelling or digging down, it was either folly or ignorance to propose it if they did or did not know how that side of the hill was an entire rock, which would break their tools and hearts, without any damage to itself. That they would therefore advise the Moderns rather to raise their own side of the hill than dream of pulling down that of the Ancients; to the former of which they would not only give licence, but also largely contribute.