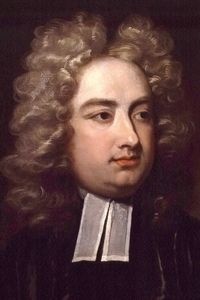 Jonathan Swift was an Anglo-Irish satirist, essayist, political pamphleteer, poet and cleric who became Dean of St. Patrick’s, Dublin. He is remembered for works such as Gulliver’s Travels, A Modest Proposal, A Journal to Stella and A Tale of a Tub. Swift is probably the foremost prose satirist in the English language, and is less well known for his poetry. Swift originally published all of his works under pseudonyms—such as Lemuel Gulliver, Isaac Bickerstaff, M.B. Drapier—or anonymously. He is also known for being a master of two styles of satire: the Horatian and Juvenalian styles. (source: Wikipedia)

From the master of satire, Jonathan Swift, comes a collection of his classic satirical works. “A Modest Proposal and Other Satires” includes the followi...read more »

A Tale of a Tub was the first major work written by Jonathan Swift, composed between 1694 and 1697 and published in 1704. It is probably his most diffic...read more »

Shipwrecked and cast adrift, Lemuel Gulliver wakes to find himself on Lilliput, an island inhabited by little people, whose height makes their quarrels ...read more »

While things were in this ferment, discord grew extremely high; hot words passed on both sides, and ill blood was plentifully bred. Here a solitary Anci...read more »