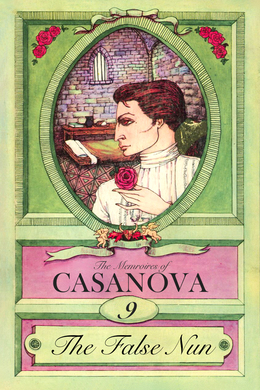 Awake in a moment she came to open the door in her smock, and without a light. As I wanted one, I told her to get the flint and steel, which she did, warning me in a modest voice that she was not dressed. “That’s of no consequence,” said I, “provided you are covered.” She said no more, and soon lighted a candle, but she could not help laughing when she saw me dripping wet.

Supper at My Casino With M. M. and M. de Bernis, the French Ambassador– A Proposal from M. M.; I Accept It–Consequences–C. C. is Unfaithful to Me, and I Cannot Complain

I felt highly pleased with the supper-party I had arranged with M—- M- —, and I ought to have been happy. Yet I was not so; but whence came the anxiety which was a torment to me? Whence? From my fatal habit of gambling. That passion was rooted in me; to live and to play were to me two identical things, and as I could not hold the bank I would go and punt at the ridotto, where I lost my money morning and night. That state of things made me miserable. Perhaps someone will say to me:

“Why did you play, when there was no need of it, when you were in want of nothing, when you had all the money you could wish to satisfy your fancies?”

That would be a troublesome question if I had not made it a law to tell the truth. Well, then, dear inquisitive reader, if I played with almost the certainty of losing, although no one, perhaps, was more sensible than I was to the losses made in gambling, it is because I had in me the evil spirit of avarice; it is because I loved prodigality, and because my heart bled when I found myself compelled to spend any money that I had not won at the gaming-table. It is an ugly vice, dear reader, I do not deny it. However, all I can say is that, during the four days previous to the supper, I lost all the gold won for me by M—- M—-

On the anxiously-expected day I went to my casino, where at the appointed hour M—- M—- came with her friend, whom she introduced to me as soon as he had taken off his mask.

“I had an ardent wish, sir,” said M. de Bernis to me, “to renew acquaintance with you, since I heard from madame that we had known each other in Paris.”

With these words he looked at me attentively, as people will do when they are trying to recollect a person whom they have lost sight of. I then told him that we had never spoken to one another, and that he had not seen enough of me to recollect my features now.

“I had the honour,” I added, “to dine with your excellency at M. de Mocenigo’s house, but you talked all the time with Marshal Keith, the Prussian ambassador, and I was not fortunate enough to attract your attention. As you were on the point of leaving Paris to return to Venice, you went away almost immediately after dinner, and I have never had the honour of seeing you since that time.”

“Now I recollect you,” he answered, “and I remember asking whether you were not the secretary of the embassy. But from this day we shall not forget each other again, for the mysteries which unite us are of a nature likely to establish a lasting intimacy between us.”

The amiable couple were not long before they felt thoroughly at ease, and we sat down to supper, of which, of course, I did the honours. The ambassador, a fine connoisseur in wines, found mine excellent, and was delighted to hear that I had them from Count Algarotti, who was reputed as having the best cellar in Venice.

My supper was delicate and abundant, and my manners towards my handsome guests were those of a private individual receiving his sovereign and his mistress. I saw that M—- M—- was charmed with the respect with which I treated her, and with my conversation, which evidently interested the ambassador highly. The serious character of a first meeting did not prevent the utterance of witty jests, for in that respect M. de Bernis was a true Frenchman. I have travelled much, I have deeply studied men, individually and in a body, but I have never met with true sociability except in Frenchmen; they alone know how to jest, and it is rare, delicate, refined jesting, which animates conversation and makes society charming.

During our delightful supper wit was never wanting, and the amiable M— - M—- led the conversation to the romantic combination which had given her occasion to know me. Naturally, she proceeded to speak of my passion for C—- C—-, and she gave such an interesting description of that young girl that the ambassador listened with as much attention as if he had never seen the object of it. But that was his part, for he was not aware that I had been informed of his having witnessed from his hiding- place my silly interview with C—- C—-. He told M—- M—- that he would have been delighted if she had brought her young friend to sup with us.

“That would be running too great a risk,” answered the cunning nun, “but if you approve of it,” she added, looking at me, “I can make you sup with her at my casino, for we sleep in the same room.”

That offer surprised me much, but it was not the moment to shew it, so I replied:

“It is impossible, madam, to add anything to the pleasure of your society, yet I confess I should be pleased if you could contrive to do us that great favour:”