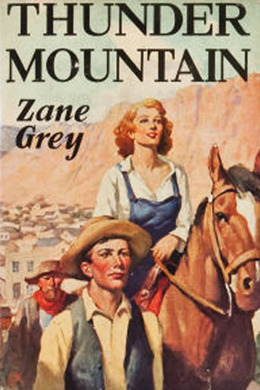 Greed and gold unleash a storm of robbery, vengeance, and murder. On the word of a dying Indian, the three Emerson brothers come to Thunder Mountain in the Sawtooth Range and discover more gold than they ever dreamed possible. But instead of finding peace and prosperity, Jake, Kalispel, and Sam Emerson find more treachery than any normal men could hope to survive.

A warm spring rain melted the deep snows in the Saw Tooth Range, and a flood poured down the headwaters of the Salmon River.

It washed out a colony of beavers, one of which, a crippled old female with a cub, fell behind the others and lost them. She came at length into a narrow valley where the stream meandered along a wide rocky bench wooded by stately isolated pines and fringes of willow and aspen.

The old mother beaver lingered with her cub near the mouth of an intersecting brook. In a sheltered bend under the looming mountain slope she began her labors. While the little cub played and splashed about she toiled industriously, cutting branches, carrying sticks, dragging rocks, and padding mud until she had bridged the brook and built a dam. A still pool rose behind the barrier.

One night when the afterglow of sunset loomed dull red upon the pool and the silence of the wilderness lay like a mantle upon the valley, the old beaver noticed a strange quivering ripple passing across the placid surface of her pool. There was no current coming from the brook, there was no breath of wind to disturb the dead calm. She noticed the tremors pass across the pool, she sniffed the pine-scented air, she listened with all the sensitiveness of a creature of the wild.

From high up on the looming mountain slope, from the somber purple shadow, came down a low rumble, a thunder that seemed to growl from the bowels of the great mountain.

The old mother beaver did not wait to hear that again. With her cub she abandoned the quivering pool, and taking to the main stream she left the valley.

The last remnant of the Sheepeater Indians pitched camp on the rocky bench across the stream from the abandoned beaver dam.

Outcasts from various tribes, they were fugitives and had banded together for protection, fifty-one in all, warriors, squaws, and children, under the command of Tomanmo.

While the braves put up their lodges, the weary squaws unpacked meager supplies and belongings. The lame children, exhausted from continuous march, sat silent with somber eyes.

Tomanmo gazed up and down this valley to which he had been led by the Nez Percé member of his band. Long and hard had been the tramp hither, and the last miles over solid rock. The soldiers could not track them here. It was a refuge. Deer and elk as tame as cattle grazed under the pines; white goats shone on the high bluffs of the south wall; mountain sheep stood silhouetted against the sky, watching the invaders of their solitude.

“We will hide here and rest. It is well,” said Tomanmo to his band, and he sent hunters out to kill fresh meat.

When the chief sat down he found himself facing the north slope of the valley. It struck him singularly, and he gazed with the falcon eyes of one used to the heights. Bare and steep, this slope, open to the south, slanted abruptly from the edge of the rocky bench some few hundred yards distant. What first attracted Tomanmo’s curiosity was the fact that no game trail, not even a single track, marred the smooth surface of the incline. It sheered up a long way before its purple continuity was broken by a thin line of fir trees, pointing skyward like tufted spears. From there the color gray and the smooth surface broke to scantily timbered ledges that stepped up and up prodigiously, at last to turn white with snow on the skyline. Precipitous looming mountains were the rule in that range, and all the south slopes, where the snow did not long lie, were bare of timber. But the endless south slope of this mountain showed no solid foundation of rock, no iron ribs of red granite, no bulge of cliff sheering up out of soft earth. Tomanmo shook his lean dark head.

Presently the Nez Percé approached the chief to open a skinny fist to his gaze. He held a handful of wet gravel and sand among which glinted bright specks.

“Some day, long after Sheepeaters gone,” assented the Nez Percé.

The solemn still day wore on. The pointed lodges of elk hide and the brush shelters, the columns of blue smoke rising upward, the active raven-haired squaws with their colored raiment flashing in the sun, the hunters dragging carcasses over the stones, the ragged hollow-cheeked children asleep on the ground–all attested to a settlement of permanent camp. Soon pots were steaming, fragrant viands broiled over the red coals, cakes of bread baked on the hot flat stones.

At sunset the band feasted. Only Tomanmo did not share the sense of well-being after long hardship. While he ate he watched the changing colors on the steep slope, the darkening purple at the base, the merging of gray into the gold-flushed snow, high on the peaks.