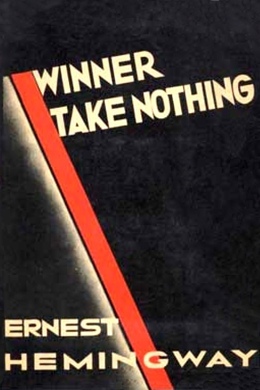 Ernest Hemingway’s first new book of fiction, since the publication of A Farewell to Arms, contains fourteen stories of varying length. Some of them have appeared in magazines but the majority have not been published before. The characters and backgrounds are widely varied. “A Clean, Well-Lighted Place” is about an old Spanish Beggar. “Homage to Switzerland” concerns various conversations at a Swiss railway-station restaurant. “The Gambler, the Nun, and the Radio” is laid in the accident ward of a hospital in Western United States, and so on. Ernest Hemingway made his literary start as a short-story writer. He has always excelled in that medium, and this volume reveals him at his best.

It wasn’t about anything, something about making punch, and then we started fighting and I slipped and he had me down kneeling on my chest and choking me with both hands like he was trying to kill me and all the time I was trying to get the knife out of my pocket to cut him loose. Everybody was too drunk to pull him off me. He was choking me and hammering my head on the floor and I got the knife out and opened it up; and I cut the muscle right across his arm and he let go of me. He couldn’t have held on if he wanted to. Then he rolled and hung onto that arm and started to cry and I said:

“What the hell you want to choke me for?”

I’d have killed him. I couldn’t swallow for a week. He hurt my throat bad.

Well, I went out of there and there were plenty of them with him and some come out after me and I made a turn and was down by the docks and I met a fellow and he said somebody killed a man up the street. I said “Who killed him?” and he said “I don’t know who killed him but he’s dead all right,” and it was dark and there was water standing in the street and no lights and windows broke and boats all up in the town and trees blown down and everything all blown and I got a skiff and went out and found my boat where I had her inside of Mango Key and she was all right only she was full of water. So I bailed her out and pumped her out and there was a moon but plenty of clouds and still plenty rough and I took it down along; and when it was daylight I was off Eastern Harbor.

Brother, that was some storm. I was the first boat out and you never saw water like that was. It was just as white as a lye barrel and coming from Eastern Harbor to Sou’west Key you couldn’t recognize the shore. There was a big channel blown right out through the middle of the beach. Trees and all blown out and a channel cut through and all the water white as chalk and everything on it; branches and whole trees and dead birds, and all floating. Inside the keys were all the pelicans in the world and all kinds of birds flying. They must have gone inside there when they knew it was coming.

I lay at Sou’west Key a day and nobody came after me. I was the first boat out and I seen a spar floating and I knew there must be a wreck and I started out to look for her. I found her. She was a three-masted schooner and I could just see the stumps of her spars out of water. She was in too deep water and I didn’t get anything off of her. So I went on looking for something else. I had the start on all of them and I knew I ought to get whatever there was. I went on down over the sand-bars from where I left that three-masted schooner and I didn’t find anything and I went on a long way. I was way out toward the quicksands and I didn’t find anything so I went on. Then when I was in sight of the Rebecca Light I saw all kinds of birds making over something and I headed over for them to see what it was and there was a cloud of birds all right.

I could see something looked like a spar up out of water and when I got over close the birds all went up in the air and stayed all around me. The water was clear out there and there was a spar of some kind sticking out just above the water and when I come up close to it I saw it was all dark under water like a long shadow and I came right over it and there under water was a liner; just lying there all under water as big as the whole world. I drifted over her in the boat. She lay on her side and the stern was deep down. The port holes were all shut tight and I could see the glass shine in the water and the whole of her; the biggest boat I ever saw in my life laying there and I went along the whole length of her and then I went over and anchored and I had the skiff on the deck forward and I shoved it down into the water and sculled over with the birds all around me.

I had a water glass like we use sponging and my hand shook so I could hardly hold it. All the port holes were shut that you could see going along over her but way down below near the bottom something must have been open because there were pieces of things floating out all the time. You couldn’t tell what they were. Just pieces. That’s what the birds were after. You never saw so many birds. They were all around me; crazy yelling.