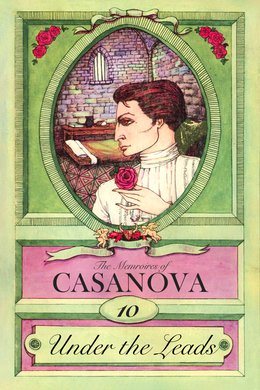 Casanova: Part 10 - Under The Leads

This earthquake shock was the result of those which at the same time destroyed Lisbon. The Leads, used for the confinement of state prisoners, are in fact the lofts of the ducal palace, and take their name from the large plates of lead with which the roof is covered. One can only reach them through the gates of the palace, the prison buildings, or by the bridge of which I have spoken called the Bridge of Sighs. The prisons are under the roof on two sides of the palace; three to the west (mine being among the number) and four to the east. On the west the roof looks into the court of the palace, and on the east straight on to the canal called Rio di Palazzo.

What a strange and unexplained power certain words exercise upon the soul! I, who the evening before so bravely fortified myself with my innocence and courage, by the word tribunal was turned to a stone, with merely the faculty of passive obedience left to me.

My desk was open, and all my papers were on a table where I was accustomed to write.

“Take them,” said I, to the agent of the dreadful Tribunal, pointing to the papers which covered the table. He filled a bag with them, and gave it to one of the sbirri, and then told me that I must also give up the bound manuscripts which I had in my possession. I shewed him where they were, and this incident opened my eyes. I saw now, clearly enough, that I had been betrayed by the wretch Manuzzi. The books were, “The Key of Solomon the King,” “The Zecorben,” a “Picatrix,” a book of “Instructions on the Planetary Hours,” and the necessary incantations for conversing with demons of all sorts. Those who were aware that I possessed these books took me for an expert magician, and I was not sorry to have such a reputation.

Messer-Grande took also the books on the table by my bed, such as Petrarch, Ariosto, Horace. “The Military’ Philosopher” (a manuscript which Mathilde had given me), “The Porter of Chartreux,” and “The Aretin,” which Manuzzi had also denounced, for Messer-Grande asked me for it by name. This spy, Manuzzi, had all the appearance of an honest man–a very necessary qualification for his profession. His son made his fortune in Poland by marrying a lady named Opeska, whom, as they say, he killed, though I have never had any positive proof on the matter, and am willing to stretch Christian charity to the extent of believing he was innocent, although he was quite capable of such a crime.

While Messer-Grande was thus rummaging among my manuscripts, books and letters, I was dressing myself in an absent-minded manner, neither hurrying myself nor the reverse. I made my toilette, shaved myself, and combed my hair; putting on mechanically a laced shirt and my holiday suit without saying a word, and without Messer-Grande–who did not let me escape his sight for an instant–complaining that I was dressing myself as if I were going to a wedding.

As I went out I was surprised to see a band of forty men-at-arms in the ante-room. They had done me the honour of thinking all these men necessary for my arrest, though, according to the axiom ‘Ne Hercules quidem contra duos’, two would have been enough. It is curious that in London, where everyone is brave, only one man is needed to arrest another, whereas in my dear native land, where cowardice prevails, thirty are required. The reason is, perhaps, that the coward on the offensive is more afraid than the coward on the defensive, and thus a man usually cowardly is transformed for the moment into a man of courage. It is certain that at Venice one often sees a man defending himself against twenty sbirri, and finally escaping after beating them soundly. I remember once helping a friend of mine at Paris to escape from the hands of forty bum-bailiffs, and we put the whole vile rout of them to flight.

Messer-Grande made me get into a gondola, and sat down near me with an escort of four men. When we came to our destination he offered me coffee, which I refused; and he then shut me up in a room. I passed these four hours in sleep, waking up every quarter of an hour to pass water–an extraordinary occurrence, as I was not at all subject to stranguary; the heat was great, and I had not supped the evening before. I have noticed at other times that surprise at a deed of oppression acts on me as a powerful narcotic, but I found out at the time I speak of that great surprise is also a diuretic. I make this discovery over to the doctors, it is possible that some learned man may make use of it to solace the ills of humanity. I remember laughing very heartily at Prague six years ago, on learning that some thin-skinned ladies, on reading my flight from The Leads, which was published at that date, took great offence at the above account, which they thought I should have done well to leave out. I should have left it out, perhaps, in speaking to a lady, but the public is not a pretty woman whom I am intent on cajoling, my only aim is to be instructive. Indeed, I see no impropriety in the circumstance I have narrated, which is as common to men and women as eating and drinking; and if there is anything in it to shock too sensitive nerves, it is that we resemble in this respect the cows and pigs.

It is probable that just as my overwhelmed soul gave signs of its failing strength by the loss of the thinking faculty, so my body distilled a great part of those fluids which by their continual circulation set the thinking faculty in motion. Thus a sudden shock might cause instantaneous death, and send one to Paradise by a cut much too short.