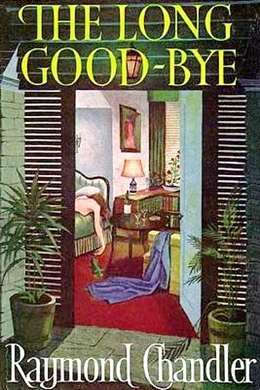 When Philip Marlowe befriends down-on-his-luck veteran Terry Lennox he gets more than he bargained for. With Lennox’s wife dead and Lennox himself on the lam, Marlowe becomes the target for the local cops and a crazy gangster, while getting mixed up with alcoholic writer Roger Wade and his wife Eileen. Nothing is what it seems as Marlowe unravels the Wades’ scheme to expose the truth behind Lennox’s facade. The most autobiographical of his novels, The Long Goodbye was considered by Chandler to be his best work. One of the preeminent examples of hard-boiled detective fiction, Adapted for radio, film and television, it received the 1955 Edgar Award for Best Novel.

The first time I laid eyes on Terry Lennox he was drunk in a Rolls-Royce Silver Wraith outside the terrace of The Dancers. The parking lot attendant had brought the car out and he was still holding the door open because Terry Lennox’s left foot was still dangling outside, as if he had forgotten he had one. He had a young-looking face but his hair was bone white. You could tell by his eyes that he was plastered to the hairline, but otherwise he looked like any other nice young guy in a dinner jacket who had been spending too much money in a joint that exists for that purpose and for no other.

There was a girl beside him. Her hair was a lovely shade of dark red and she had a distant smile on her lips and over her shoulders she had a blue mink that almost made the Rolls-Royce look like just another automobile. It didn’t quite. Nothing can.

The attendant was the usual half-tough character in a white coat with the name of the restaurant stitched across the front of it in red. He was getting fed up.

“Look, mister,” he said with an edge to his voice, “would you mind a whole lot pulling your leg into the car so I can kind of shut the door? Or should I open it all the way so you can fall out?”

The girl gave him a look which ought to have stuck at least four inches out of his back. It didn’t bother him enough to give him the shakes. At The Dancers they get the sort of people that disillusion you about what a lot of golfing money can do for the personality.

A low-swung foreign speedster with no top drifted into the parking lot and a man got out of it and used the dash lighter on a long cigarette. He was wearing a pullover check shirt, yellow slacks, and riding boots. He strolled off trailing clouds of incense, not even bothering to look towards the Rolls-Royce. He probably thought it was corny. At the foot of the steps up to the terrace he paused to stick a monocle in his eye.

The girl said with a nice burst of charm: “I have a wonderful idea, darling. Why don’t we just take a cab to your place and get your convertible out? It’s such a wonderful night for a run up the coast to Montecito. I know some people there who are throwing a dance around the pool.”

The white-haired lad said politely: “Awfully sorry, but I don’t have it any more. I was compelled to sell it.” From his voice and articulation you wouldn’t have known he had had anything stronger than orange juice to drink.

“Sold it, darling? How do you mean?” She slid away from him along the seat but her voice slid away a lot farther than that.

“Oh, I see.” A slice of spumoni wouldn’t have melted on her now.

The attendant had the white-haired boy right where he could reach him–in a low-income bracket. “Look, buster,” he said, “I’ve got to put a car away. See you some more some other time–maybe.”

He let the door swing open. The drunk promptly slid off the seat and landed on the blacktop on the seat of his pants. So I went over and dropped my nickel. I guess it’s always a mistake to interfere with a drunk. Even if he knows and likes you he is always liable to haul off and poke you in the teeth. I got him under the arms and got him up on his feet.

“Thank you so very much,” he said politely.

The girl slid under the wheel. “He gets so goddam English when he’s loaded,” she said in a stainless-steel voice. “Thanks for catching him.”

“I’m terribly sorry. I’m late for an engagement.” She let the clutch in and the Rolls started to glide. “He’s just a lost dog,” she added with a cool smile. “Perhaps you can find a home for him. He’s housebroken–more or less.”

And the Rolls ticked down the entrance driveway onto Sunset Boulevard, made a right turn, and was gone. I was looking after her when the attendant came back. And I was still holding the man up and he was now sound asleep.

“Well, that’s one way of doing it,” I told the white coat.

“Sure,” he said cynically. “Why waste it on a lush? Them curves and all.”

“I heard the dame call him Terry. Otherwise I don’t know him from a cow’s caboose. But I only been here two weeks.”

By the time he brought my Olds over I felt as if I was holding up a sack of lead. The white coat helped me get him into the front seat. The customer opened an eye and thanked us and went to sleep again.

“He’s the politest drunk I ever met,” I said to the white coat.

“They come all sizes and shapes and all kinds of manners,” he said. “And they’re all bums. Looks like this one had a plastic job one time.”

“Yeah.” I gave him a dollar and he thanked me. He was right about the plastic job. The right side of my new friend’s face was frozen and whitish and seamed with thin fine scars. The skin had a glossy look along the scars. A plastic job and a pretty drastic one.

“Whatcha aim to do with him?”