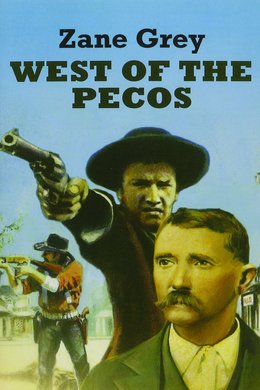 West of the Pecos

Young Terrill “Rill” Lambeth could ride and shoot with the best men in the South. When her widowed, war-ruined father packs up a caravan and drives toward Texas, she gets the chance to test her skills and prove herself on the rugged and dangerous trail west. Facing harrowing buffalo stampedes, harsh elements and even harsher men takes every bit of Rill’s strength. Still, it is only when a quick-shooting vaquero, Pecos Smith, joins her perilous trek that the lives of Rill and everyone else in the caravan are changed forever.

When Templeton Lambeth’s wife informed him that if God was good they might in due time expect the heir he had so passionately longed for, he grasped at this with the joy of a man whose fortunes were failing, and who believed that a son might revive his once cherished dream of a new and adventurous life on the wild Texas ranges west of the Pecos River.

That very momentous day he named the expected boy Terrill Lambeth, for a beloved brother. Their father had bequeathed to each a plantation; one in Louisiana, and the other in eastern Texas. Terrill had done well with his talents, while Templeton had failed.

The baby came and it was a girl. This disappointment was the second of Lambeth’s life, and the greater. Lambeth never reconciled himself to what he considered a scurvy trick of fate. He decided to regard the child as he would a son, and to bring her up accordingly. He never changed the name Terrill. And though he could not help loving Terrill as a daughter, he exulted in her tomboy tendencies and her apparently natural preferences for the rougher and more virile pleasures and occupations. Of these he took full advantage.

Lambeth saw that Terrill had teachers and schooling beginning with her fifth year, but when she reached the age of ten he was proudest of the boyish accomplishments he had fostered, especially her skill in horsemanship. Terrill could ride any four-footed animal on the plantation.

Then came the Civil War. Lambeth, at that time in his middle thirties, obtained an officer’s commission, and his brother, Terrill, enlisted as a private.

During this period of slow disintegration of the South’s prosperity Mrs. Lambeth had her innings with Terrill. Always she had been under the dominance of her husband, and could not stress the things she desired to see inculcated in her daughter. She belonged to one of the old Southern families of French extraction, and after her marriage she had learned she had not been Lambeth’s first love. Pride and melancholy, coupled with her gentle and retiring virtues, operated against her opposing Lambeth in his peculiar way of being happy by making Terrill’s play as well as work those of a boy. But during the long and devastating war the mother made up greatly for those things she feared Terrill had lacked. Before the end of the war, when Terrill was fifteen, she died, leaving her a heritage that not all the girl’s passionate thirst for adventure nor her father’s influence could ever wholly eradicate. Lambeth returned home a Colonel, destined to suffer less grief at finding himself ruined as a planter, than at the certainty of his brother’s early demise. Terrill had fallen victim to an incurable disease during the war, and had been invalided home long before Lee’s surrender.

His wife’s death and his ruin did not further embitter Lambeth, inasmuch as these misfortunes left the way unobstructed for tearing up root and setting out for the western frontier of Texas, where vast and unknown rangelands offered fortune to a man still young enough to work and fight.

Texas was a world in itself. Before the war Lambeth had hunted north as far as the Panhandle and west over the buffalo plains between the Arkansas and the Red Rivers. He had ideas about the future of the country. He was tired of cotton raising. Farther west he would roam to the land beyond the vague and wild Pecos, about which country alluring rumors had reached his ears.

Colonel Lambeth’s first move upon arriving home was to free those slaves who still remained on his plantation despite the freedom for which the war had been waged. And the next, after selecting several favorite horses, a wagon and equipment, and a few possessions that would have been hard to part with, he put the plantation and everything on it under the hammer. Little indeed did he realize from this sale.

Then came news of his brother’s death and with it a legacy sufficient to enable him to carry on. But Lambeth had had enough of a planter’s ups and downs. The soil was poor and he had neither the desire nor the ability to try again. The West called. Texans impoverished by the war, and the riff-raff left over from the army, were spreading far and wide to the north and west, lured on by something magnetic and compelling.

Lambeth journeyed across the Mississippi, to return with sad and imperishable memories of his brother, and with the means to fulfill his old forlorn hope—to find and stock a ranch in the West.

Two of Lambeth’s younger generation of slaves, out of the many who wanted to cleave to him, he listened to, appreciative of what their help would mean on such a hazardous enterprise as he was undertaking.