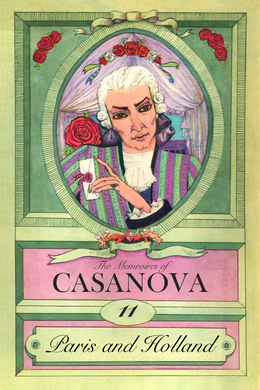 There is no one like him to introduce the pre revolutionary 18th century to the reader. In our times, most will know him as the complete seducer of women. Almost right. He loved woman, as women loved him. Above all and in all, he was a true gentleman. Read him then and know his charm. Out of learning evil is not bred, nor virtue found in all who are unread.

In the beginning of March, 1757, I received a letter from my friend Madame Manzoni, which she sent to me by a young man of good appearance, with a frank and high-born air, whom I recognized as a Venetian by his accent. He was young Count Tiretta de Trevisa, recommended to my care by Madame Manzoni, who said that he would tell me his story, which I might be sure would be a true one. The kind woman sent to me by him a small box in which she told me I should find all my manuscripts, as she did not think she would ever see me again.

I gave Tiretta the heartiest of welcomes, telling him that he could not have found a better way to my favour than through a woman to whom I was under the greatest obligations.

“And now, that you may be at your ease with me, I should like to know in what manner I can be of service to you?”

“I have need of your friendship, perhaps of your purse, but at any rate of your protection.”

“You have my friendship and my protection already, and my purse is at your service.”

After expressing his gratitude to me, Tiretta said,

“A year ago the Supreme Council of my country entrusted me with an employment dangerous to one of my years. I was made, with some other young gentlemen of my own age, a keeper of the Mont de Piete. The pleasures of the carnival having put us to a good deal of expense, we were short of money, and borrowed from the till hoping to be able to make up the money before balancing-day, but hoping all in vain.

“The fathers of my two companions, richer than mine, paid the sums they had taken, and I, not being able to pay, took the part of escaping by flight from the shame and the punishment I should have undergone.

“Madame Manzoni advised me to throw myself on your mercy, and she gave me a little box which you shall have to-day. I only got to Paris yesterday, and have only two louis, a little linen, and the clothes on my back. I am twenty-five, have an iron constitution, and a determination to do all in my power to make an honest living; but I can do nothing. I have not cultivated any one talent in a manner to make use of it now. I can play on the flute, but only as an amateur. I only know my own language, and I have no taste for literature. So what can you make of me? I must add that I have not a single expectation, least of all from my father, for to save the honour of the family he will be obliged to sell my portion of the estate, to which I shall have to bid an eternal farewell.”

If the count’s story had surprised me, the simplicity with which he told it had given me pleasure; and I was resolved to do honour to Madame Manzoni’s introduction, feeling that it was my duty to serve a fellow- countryman, who was really guilty of nothing worse than gross thoughtlessness.

“Begin,” said I, “by bringing your small belongings to the room next to mine, and get your meals there. I will pay for everything while I am looking out for something which may do for you.

“We will talk of business to-morrow, for as I never dine here I rarely if ever come home till late, and I do not expect to have the honour of seeing you again today. Leave me for the present, as I have got some work to do; and if you go out to walk, beware of bad company, and whatever you do keep your own counsel. You are fond of gaming, I suppose?”

“I hate it, as it has been the cause of half my troubles.”

“And the other half, I’ll wager, was caused by women.”

“You have guessed aright–oh, those women!”

“Well, don’t be angry with them, but make them pay for the ill they have done you.”

“I will, with the greatest pleasure, if I can.”

“If you are not too particular in your goods, you will find Paris rich in such commodities.”

“What do you mean by particular? I would never be a prince’s pathic.”

“No, no, I was not thinking of that. I mean by ‘particular’ a man who cannot be affectionate unless he is in love. The man who … .”

“I see what you mean, and I can lay no claim to such a character. Any hag with golden eyes will always find me as affectionate as a Celadon.”

“Well said! I shall soon be able to arrange matters for you.”

“Are you going to the ambassador’s?”

“Good God!–no! What should I do when I got there? Tell him my story? He might make things unpleasant for me.”

“Not without your going to see him, but I expect he is not concerning himself with your case.”

“Everybody, my dear count, is in mourning in Paris, so go to my tailor’s and get yourself a black suit. Tell him you come from me, and say you want it by tomorrow. Good bye.”