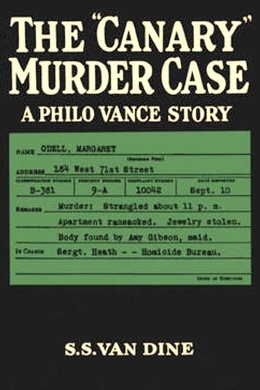 The beautiful Margaret Odell, famous Broadway beauty and ex-Follies girl known as “The Canary”, is found murdered in her apartment. She has a number of men in her life, ranging from high society to gangsters, and more than one man visited her apartment on the night she dies. It is Philo Vance’s characteristic erudition that leads him to a key clue that allows him to penetrate a very clever alibi and reveal the killer. “The strangeness, the daring, the seeming impenetrability of the crime marked it as one of the most singular and astonishing cases in New York’s police annals; and had it not been for Philo Vance’s participation in its solution, I firmly believe it would have remained one of the great unsolved mysteries of this country.”

In the offices of the Homicide Bureau of the Detective Division of the New York Police Department, on the third floor of the Police Headquarters building in Center Street, there is a large steel filing cabinet; and within it, among thousands of others of its kind, there reposes a small green index-card on which is typed: “ODELL, MARGARET. 184 West 71st Street. Sept. 10. Murder: Strangled about 11 p.m. Apartment ransacked. Jewelry stolen. Body found by Amy Gibson, maid.”

Here, in a few commonplace words, is the bleak, unadorned statement of one of the most astonishing crimes in the police annals of this country—a crime so contradictory, so baffling, so ingenious, so unique, that for many days the best minds of the Police Department and the District Attorney’s office were completely at a loss as to even a method of approach. Each line of investigation only tended to prove that Margaret Odell could not possibly have been murdered. And yet, huddled on the great silken davenport in her living-room lay the girl’s strangled body, giving the lie to so grotesque a conclusion.

The true story of this crime, as it eventually came to light after a disheartening period of utter darkness and confusion, revealed many strange and bizarre ramifications, many dark recesses of man’s unexplored nature, and the uncanny subtlety of a human mind sharpened by desperate and tragic despair. And it also revealed a hidden page of passional melodrama which, in its essence and organisms, was no less romantic and fascinating than that vivid, theatrical section of the Comédie Humaine which deals with the fabulous love of Baron Nucingen for Esther van Gobseck, and with the unhappy Torpille’s tragic death.

Margaret Odell was a product of the bohemian demi-monde of Broadway—a scintillant figure who seemed somehow to typify the gaudy and spurious romance of transient gaiety. For nearly two years before her death she had been the most conspicuous and, in a sense, popular figure of the city’s night life. In our grandparents’ day she might have had conferred upon her that somewhat questionable designation, “the toast of the town”; but to-day there are too many aspirants for this classification, too many cliques and violent schisms in the Lepidoptera of our café life, to permit of any one competitor being thus singled out. But, for all the darlings of both professional and lay press-agents, Margaret Odell was a character of unquestioned fame in her little world.

Her notoriety was due in part to certain legendary tales of her affairs with one or two obscure potentates in the backwashes of Europe. She had spent two years abroad after her first success in “The Bretonne Maid”—a popular musical comedy in which she had been mysteriously raised from obscurity to the rank of “star”—and, one may cynically imagine, her press-agent took full advantage of her absence to circulate vermilion tales of her conquests.

Her appearance went far toward sustaining her somewhat equivocal fame. There was no question that she was beautiful in a hard, slightly flamboyant way. I remember seeing her dancing one night at the Antlers Club—a famous rendezvous for post-midnight pleasure-seekers, run by the notorious Red Raegan. She impressed me then as a girl of uncommon loveliness, despite the calculating, predatory cast of her features. She was of medium height, slender, graceful in a leonine way, and, I thought, a trifle aloof and even haughty in manner—a result, perhaps, of her reputed association with European royalty. She had the traditional courtesan’s full, red lips, and the wide, mongoose eyes of Rossetti’s “Blessed Damozel.” There was in her face that strange combination of sensual promise and spiritual renunciation with which the painters of all ages have sought to endow their conceptions of the Eternal Magdalene. Hers was the type of face, voluptuous and with a hint of mystery, which rules man’s emotions and, by subjugating his mind, drives him to desperate deeds.

Margaret Odell had received the sobriquet of Canary as a result of a part she had played in an elaborate ornithological ballet of the “Follies,” in which each girl had been gowned to represent a variety of bird. To her had fallen the rôle of canary; and her costume of white-and-yellow satin, together with her mass of shining golden hair and pink-and-white complexion, had distinguished her in the eyes of the spectators as a creature of outstanding charm. Before a fortnight had passed—so eulogistic were her press notices, and so unerringly did the audience single her out for applause—the “Bird Ballet” was changed to the “Canary Ballet,” and Miss Odell was promoted to the rank of what might charitably be called première danseuse, at the same time having a solo waltz and a song interpolated for the special display of her charms and talents.