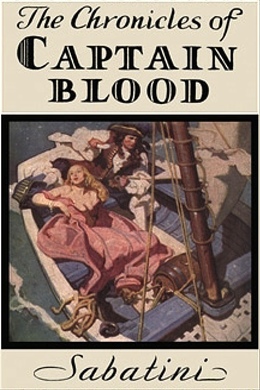 The Chronicles of Captain Blood

Further adventures from the much-loved Captain Blood, the ‘Robin Hood’ of the Spanish Seas. His latest exploits take him to new adventures with as much excitement and swashbuckling adventure as ever before. Winning invaluable treasures, rescuing his crew from almost certain death and saving an English settlement are all in a day’s work for this remarkable hero of land and sea.

Captain Easterling, whose long duel with Peter Blood finds an important place in the chronicles which Jeremy Pitt has left us, must be regarded as the instrument chosen by Fate to shape the destiny of those rebels-convict who fled from Barbadoes in the captured Cinco Llagas.

The lives of men are at the mercy of the slenderest chances. A whole destiny may be influenced by no more than the set of the wind at a given moment. And Peter Blood’s, at a time when it was still fluid, was certainly fashioned by the October hurricane which blew Captain Easterling’s ten-gun sloop into Cayona Bay, where the Cinco Llagas had been riding idly at anchor for close upon a month.

Blood and his associates had run to this buccaneer stronghold of Tortuga, assured of finding shelter there whilst they deliberated upon their future courses. They had chosen it because it was the one haven in the Caribbean where they could count upon being unmolested and where no questions would be asked of them. No English settlement would harbour them because of their antecedents. The hand of Spain would naturally be against them not only because they were English, but, further, because they were in possession of a Spanish ship. They could trust themselves to no ordinary French colony because of the recent agreement between the Governments of France and England for the apprehension and interchange of any persons escaping from penal settlements. There remained the Dutch, who were neutral. But Blood regarded neutrality as the most untrustworthy of all conditions, since it implies liberty of action in any direction. Therefore he steered clear of the Dutch as of the others and made for Tortuga, which, belonging to the French West India Company, was nominally French, but nominally only. Actually it was of no nationality, unless the Brethren of the Coast, as the buccaneering fraternity was called, could be deemed to constitute a nation. At least it can be said that no law ran in Tortuga that was at issue with the laws governing that great brotherhood. It suited the French Government to give the protection of its flag to these lawless men, so that in return they might serve French interests by acting as a curb upon Spanish greed and aggressiveness in the West Indies.

At Tortuga, therefore, the escaped rebels-convict dwelt in peace aboard the Cinco Llagas until Easterling came to disturb that peace and force them into action and into plans for their future, which, without him, they might have continued to postpone.

This Easterling–as nasty a scoundrel as ever sailed the Caribbean–carried under hatches some tons of cacao of which he had lightened a Dutch merchantman homing from the Antilles. The exploit, he realized, had not covered him with glory; for glory in that pirate’s eyes was measurable by profit; and the meagre profit in this instance was not likely to increase him in the poor esteem in which he knew himself to be held by the Brethren of the Coast. Had he suspected the Dutchman of being no more richly laden he would have let her pass unchallenged. But having engaged and boarded her, he had thought it incumbent upon him and his duty to his crew of rascals to relieve her of what she carried. That she should have carried nothing of more value than cacao was a contingency for which he blamed the evil fortune which of late had dogged him–an evil fortune which was making it increasingly difficult for him to find men to sail with him.

Considering these things, and dreaming of great enterprises, he brought his sloop Bonaventure into the shelter of the rock-bound harbour of Tortuga, a port designed by very Nature for a stronghold. Walls of rock, rising sheer, and towering like mountains, protect it upon either side and shape it into a miniature gulf. It is only to be approached by two channels demanding skilful pilotage. These were commanded by the Mountain Fort, a massive fortress with which man had supplemented the work of Nature. Within the shelter of this harbour, the French and English buccaneers who made it their lair might deride the might of the King of Spain, whom they regarded as their natural enemy, since it was his persecution of them when they had been peaceful boucan-hunters which had driven them to the grim trade of sea-rovers.