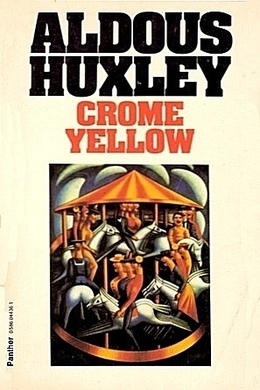 On vacation from school, Denis goes to stay at Crome, an English country house inhabitated by several of Huxley’s most outlandish characters–from Mr. Barbecue-Smith, who writes 1,500 publishable words an hour by “getting in touch” with his “subconscious,” to Henry Wimbush, who is obsessed with writing the definitive History of Crome. Denis’s stay proves to be a disaster amid his weak attempts to attract the girl of his dreams and the ridicule he endures regarding his plan to write a novel about love and art. Aldous Huxley’s first novel, Crome Yellow, was published in 1921, and, as a comedy of manners and ideas, its relatively realistic setting and format may come as a surprise to fans of his later works such as Point Counter Point and Brave New World. Some who know only Brave New World may not know that as a 16-year-old planning to enter medicine, Aldous Huxley was stricken by a serious eye disease which left him temporarily blind, and which derailed what certainly would have been a prominent career as a physician or scientist. Crome Yellow has often been called “witty,” as well as “talky,” and it certainly owes as much to Vanity Fair as it may, surprisingly to some, owe to Tristram Shandy, although one might think that characters such as Mr. Barbecue-Smith and his remarkable writing theories could have some literary antecedents in Lawrence Sterne. Lambasting the post-Victorian standards of morality, Crome Yellow is a witty masterpiece that, in F. Scott Fitzgerald’s words, “is too irnonic to be called satire and too scornful to be called irony.”

Along this particular stretch of line no express had ever passed. All the trains–the few that there were–stopped at all the stations. Denis knew the names of those stations by heart. Bole, Tritton, Spavin Delawarr, Knipswich for Timpany, West Bowlby, and, finally, Camlet-on-the-Water. Camlet was where he always got out, leaving the train to creep indolently onward, goodness only knew whither, into the green heart of England.

They were snorting out of West Bowlby now. It was the next station, thank Heaven. Denis took his chattels off the rack and piled them neatly in the corner opposite his own. A futile proceeding. But one must have something to do. When he had finished, he sank back into his seat and closed his eyes. It was extremely hot.

Oh, this journey! It was two hours cut clean out of his life; two hours in which he might have done so much, so much–written the perfect poem, for example, or read the one illuminating book. Instead of which–his gorge rose at the smell of the dusty cushions against which he was leaning.

Two hours. One hundred and twenty minutes. Anything might be done in that time. Anything. Nothing. Oh, he had had hundreds of hours, and what had he done with them? Wasted them, spilt the precious minutes as though his reservoir were inexhaustible. Denis groaned in the spirit, condemned himself utterly with all his works. What right had he to sit in the sunshine, to occupy corner seats in third-class carriages, to be alive? None, none, none.

Misery and a nameless nostalgic distress possessed him. He was twenty-three, and oh! so agonizingly conscious of the fact.

The train came bumpingly to a halt. Here was Camlet at last. Denis jumped up, crammed his hat over his eyes, deranged his pile of baggage, leaned out of the window and shouted for a porter, seized a bag in either hand, and had to put them down again in order to open the door. When at last he had safely bundled himself and his baggage on to the platform, he ran up the train towards the van.

“A bicycle, a bicycle!” he said breathlessly to the guard. He felt himself a man of action. The guard paid no attention, but continued methodically to hand out, one by one, the packages labelled to Camlet. “A bicycle!” Denis repeated. “A green machine, cross-framed, name of Stone. S-T-O-N-E.”

“All in good time, sir,” said the guard soothingly. He was a large, stately man with a naval beard. One pictured him at home, drinking tea, surrounded by a numerous family. It was in that tone that he must have spoken to his children when they were tiresome. “All in good time, sir.” Denis’s man of action collapsed, punctured.

He left his luggage to be called for later, and pushed off on his bicycle. He always took his bicycle when he went into the country. It was part of the theory of exercise. One day one would get up at six o’clock and pedal away to Kenilworth, or Stratford-on-Avon–anywhere. And within a radius of twenty miles there were always Norman churches and Tudor mansions to be seen in the course of an afternoon’s excursion. Somehow they never did get seen, but all the same it was nice to feel that the bicycle was there, and that one fine morning one really might get up at six.

Once at the top of the long hill which led up from Camlet station, he felt his spirits mounting. The world, he found, was good. The far-away blue hills, the harvests whitening on the slopes of the ridge along which his road led him, the treeless sky-lines that changed as he moved–yes, they were all good. He was overcome by the beauty of those deeply embayed combes, scooped in the flanks of the ridge beneath him. Curves, curves: he repeated the word slowly, trying as he did so to find some term in which to give expression to his appreciation. Curves–no, that was inadequate. He made a gesture with his hand, as though to scoop the achieved expression out of the air, and almost fell off his bicycle. What was the word to describe the curves of those little valleys? They were as fine as the lines of a human body, they were informed with the subtlety of art…

Galbe. That was a good word; but it was French. Le galbe evase de ses hanches: had one ever read a French novel in which that phrase didn’t occur? Some day he would compile a dictionary for the use of novelists. Galbe, gonfle, goulu: parfum, peau, pervers, potele, pudeur: vertu, volupte.

But he really must find that word. Curves curves…Those little valleys had the lines of a cup moulded round a woman’s breast; they seemed the dinted imprints of some huge divine body that had rested on these hills. Cumbrous locutions, these; but through them he seemed to be getting nearer to what he wanted. Dinted, dimpled, wimpled–his mind wandered down echoing corridors of assonance and alliteration ever further and further from the point. He was enamoured with the beauty of words.