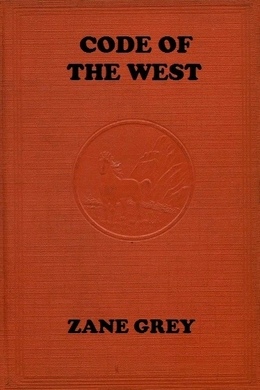 Code of the West

Georgianna Stockwell, a free-spirited young woman from the East, moves to the wilds of the Tonto Basin in Arizona and she creates a violent culture clash. She revels in a whirlwind of flirtations and coquetry, outraging the proud Western folk and violating their Code of Honour, Her presence is provocative to all young men in the Basin, but to Cal Thurman in particular she is like a firebrand in prairie grass. Through Cal she finds a love she does not expect - and a heritage of violence she cannot control.

Of the many problems that had beset Mary Stockwell during her two years of teaching school in the sparsely settled Tonto Basin of Arizona, this last one was the knottiest, the one that touched her most keenly. For it involved her little sister, Georgiana May, who was on her way to Arizona to be cured, the letter from their mother disclosed, of a slight tendency toward tuberculosis, and a very great leaning toward indiscriminate flirtation.

This day Mary was unusually tired. She had walked all the way up to the little log school-house on Tonto Creek—six miles—and back again to the Thurman ranch at Green Valley, where she boarded. Her eighteen pupils, ranging from six-year-old Mytie Thurman to sixteen-year-old Richard, had broken all records that day for insubordination. Then the hot sun of the September afternoon and the thick dust of the long dry road through brush and forest had taxed her to extreme weariness. Consequently she was not at her best to receive such a shock as her mother’s letter had given her.

“Well, there’s no help for it,” she thought wearily, taking up the letter again. “Georgiana is on her way—will arrive in Globe on the ninth. Let me see. Goodness, that’s tomorrow—Tuesday. The mail stage leaves Globe on Wednesday. She’ll get to Ryson about five o’clock. And I can’t get away. I’ll have to send someone to meet her…. Dear little golden-haired Georgie!”

Miss Stockwell seemed divided between distress at this sudden vexatious responsibility, and a reviving tender memory of her sister. What would she do with her? How would the Thurmans take this visit? Georgiana had looked very much like an angel, but she most assuredly had belied her appearance. Taking up the letter again, the perplexed schoolmistress hurried to that part which had so shocked her and scattered her wits: