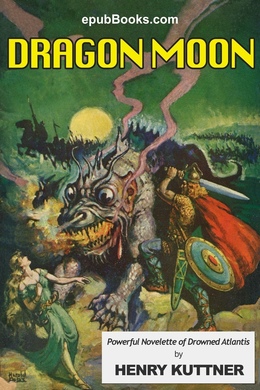 Out of the dark–out of the unknown–came Karkora…rotting the souls of the kings of Cyrena. For Karkora, the Pallid One, was a creature more loathsome than anything on earth. It was beyond good or evil, a Presence from the Outside–a shadow of which the “altar fires had whispered.”

The wharf-side tavern was a bedlam. The great harbor of Poseidonia stretched darkly to the southeast, but the waterfront was a blaze of bright lanterns and torches. Ships had made port today, and this tavern, like the others, roared with mirth and rough nautical oaths. Cooking-smoke and odor of sesame filled the broad low room, mingled with the sharp tang of wine. The swarthy seamen of the south held high carnival tonight.

In a niche in the wall was an image of the patron god, Poseidon of the sunlit seas. It was noticeable that before swilling liquor, nearly every man spilled a drop or two on the floor in the direction of the carved god.

A fat little man sat in a corner and muttered under his breath. Lycon’s small eyes examined the tavern with some distaste. His purse was, for a change, heavy with gold; so was that of Elak, his fellow adventurer. Yet Elak preferred to drink and wench in this brawling, smelly tavern, a prediliction that filled Lycon with annoyance and bitterness. He spat, muttered under his breath, and turned to watch Elak.

The lean, wolf-faced adventurer was quarreling with a sea captain whose huge, great-muscled body dwarfed Elak’s. Between the two a tavern wench was seated, her slanted eyes watching the men slyly, flattered by the attention given her.

The seaman, Drezzar, had made the mistake of underestimating Elak’s potentialities. He had cast covetous eyes upon the wench and determined to have her, regardless of Elak’s prior claim. Under other circumstances Elak might have left the slant-eyed girl to Drezzar, but the captain’s words had been insulting. So Elak remained at the table, his gaze wary, and his rapier loosened in its scabbard.

He watched Drezzar, noting the sunburnt, massive face, the bushy dark beard, the crinkled scar that swept down from temple to jawbone, blinding the man in one gray eye. And Lycon, called for more wine. Steel would flash soon, he knew.

Yet the battle came without warning. A stool was overturned, there was a flare of harsh oaths, and Drezzar’s sword came out, flaming in the lamplight. The wench screamed shrilly and fled, having little taste for bloodshed save from a distance.

Elak crouched catlike, his rapier motionless in his hand. A glint of angry laughter shone in the cold eyes.

Drezzar feinted; his sword swept out in a treacherously low cut that would have disemboweled Elak had it reached its mark. But the smaller man’s body writhed aside in swift, flowing motion; the rapier shimmered. Its point gashed Drezzar’s scalp.

They fought in silence. And this, more than anything else, gave Elak the measure of his opponent. Drezzar’s face was quite emotionless. Only the scar stood out white and distinct. His blinded eye seemed not to handicap him in the slightest degree.

Lycon waited for a chance to sheathe his steel in Drezzar’s back. Elak would disapprove, he knew, but Lycon was a realist.

Elak’s sandal slipped in a puddle of spilled liquor, and he threw himself aside desperately, striving to regain his balance. He failed. Drezzar’s lashing sword drove the rapier from his hand, and Elak went down, his head cracking sharply on an overturned stool.

The seamen poised himself, sighted down his blade, and lunged. Lycon was darting forward, but he knew he could not reach the killer in time.

And then–from the open door came the inexplicable. Something like a streak of flaming light lashed through the air, and at first Lycon thought it was a thrown dagger. But it was not. It was–flame!

White flame, darting and unearthly! It gripped Drezzar’s blade, coiled about it, ripped it from the seaman’s hand. It blazed up in blinding fiery light, limning the room in starkly distinct detail. The sword fell uselessly to the floor, a blackened, twisted stump of melted metal.

Drezzar shouted an oath. He stared at the ruined weapon, and his bronzed face paled. Swiftly he whirled and fled through a side door.

The flame had vanished. In the door a man stood–a gross, ugly figure clad in the traditional brown robe of the Druids.

Lycon, skidding to a halt, lowered his sword and whispered, “Dalan!”

Elak got to his feet, rubbing his head ruefully. At sight of the Druid his face changed. Without a word he nodded to Lycon and moved toward the door.

The three went out into the night.