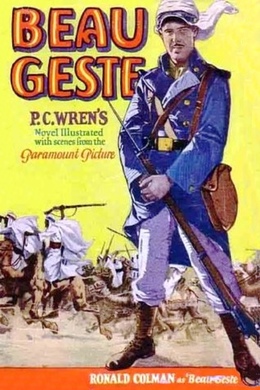 One stolen sapphire and one, two, three thieves! Beau, Digby and John Geste were present when Lady Brandon showed her dinner guests the “Blue Water”. Suddenly the lights went out and the fabulous gem vanished. Shortly after, the Gestes disappeared, too. Beau wrote his confession first. Next Digby. Then John. All three claimed to be the thief. Each fled to the same famous hiding place - the French Foreign Legion. But who had the sapphire? Beau? Digby? Or John? Their villainous commanding officer wanted the answer - and he wanted it bad enough to kill! The dramatic story of the French Foreign Legion, where men hid from the law or a woman - but never from death!

Mr. George Lawrence, C.M.G., First Class District Officer of His Majesty’s Civil Service, sat at the door of his tent and viewed the African desert scene with the eye of extreme disfavour. There was beauty neither in the landscape nor in the eye of the beholder.

The eye was jaundiced, thanks to the heat and foul dust of Bornu, to malaria, dysentery, inferior food, poisonous water, and rapid continuous marching in appalling heat.

Weak and ill in body, Lawrence was worried and anxious in mind, the one reacting on the other.

In the first place, there was the old standing trouble about the Shuwa Patrol; in the second, the truculent Chiboks were waxing insolent again, and their young men were regarding not the words of their elders concerning Sir Garnet Wolseley, and what happened, long, long ago, after the battle of Chibok Hill. Thirdly, the price of grain had risen to six shillings a saa, and famine threatened; fourthly, the Shehu and Shuwa sheiks were quarrelling again; and, fifthly, there was a very bad smallpox ju-ju abroad in the land (a secret society whose “secret” was to offer His Majesty’s liege subjects the choice between being infected with smallpox, or paying heavy blackmail to the society). Lastly, there was acrimonious correspondence with the All-Wise Ones (of the Secretariat in “Aiki Square” at Zungeru), who, as usual, knew better than the man on the spot, and bade him do either the impossible or the disastrous.

And across all the Harmattan was blowing hard, that terrible wind that carries the Saharan dust a hundred miles to sea, not so much as a sand-storm, but as a mist or fog of dust as fine as flour, filling the eyes, the lungs, the pores of the skin, the nose and throat; getting into the locks of rifles, the works of watches and cameras, defiling water, food and everything else; rendering life a burden and a curse.

The fact, moreover, that thirty days’ weary travel over burning desert, across oceans of loose wind-blown sand and prairies of burnt grass, through breast-high swamps, and across unbridged boatless rivers, lay between him and Kano, added nothing to his satisfaction. For, in spite of all, satisfaction there was, inasmuch as Kano was rail-head, and the beginning of the first stage of the journey Home. That but another month lay between him and “leave out of Africa,” kept George Lawrence on his feet.

From that wonderful and romantic Red City, Kano, sister of Timbuktu, the train would take him, after a three days’ dusty journey, to the rubbish-heap called Lagos, on the Bight of Benin of the wicked West African Coast. There he would embark on the good ship Appam, greet her commander, Captain Harrison, and sink into a deck chair with that glorious sigh of relief, known in its perfection only to those weary ones who turn their backs upon the Outposts and set their faces towards Home.

And the greatest of these is loneliness.