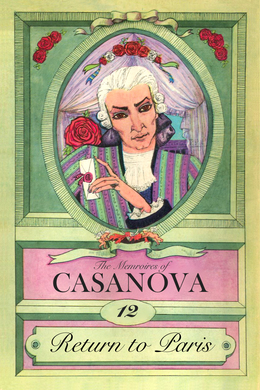 I had two objects in speaking thus: I wanted to frighten him and to make him jealous of me. I felt certain that a man in a passion of jealousy would be quite confused, and I hoped his play would suffer accordingly, and that I should not have the mortification of losing a hundred louis to his superior play, though I won the fifty louis of the wager.

My Examination I Give the Clerk Three Hundred Louis–The Midwife and Cartel-Bajac Imprisoned–Mdlle. X. C. V. Is Brought to Bed of a Son and Obliges Her Mother to Make Me Amends–The Suit Against Me Is Quashed– Mdlle. X. C. V. Goes With Her Mother to Brussels and From Thence to Venice, Where She Becomes a Great Lady–My Work-girls–Madame Baret–I Am Robbed, Put in Prison, and Set at Liberty Again–I Go to Holland– Helvetius’ “Esprit”–Piccolomini

The day after my interview with M. de Sartine I waited on Madame du Rumain at an early hour. Considering the urgency of the case I took the liberty of rousing her from her slumbers, and as soon as she was ready to receive me I told her all.

“There can be no hesitation in the matter,” said this delightful woman. “We must make a confidant of M. de Sartine, and I will speak to him myself to-day without fail.”

Forthwith she went to her desk and wrote to the criminal lieutenant asking him to see her at three o’clock in the afternoon. In less than an hour the servant returned with a note in which he said he would expect her. We agreed that I should come again in the evening, when she would tell me the result of her interview.

I went to the house at five o’clock, and had only a few minutes to wait.

“I have concealed nothing,” said she; “he knows that she is on the eve of her confinement, and that you are not the father, which speaks highly for your generosity. I told him that as soon as the confinement was over, and the young lady had recovered her health, she would return to her mother, though she would make no confession, and that the child should be well looked after. You have now nothing to fear, and can calm yourself; but as the case must go on you will be cited before the court the day after to-morrow. I advise you to see the clerk of the court on some pretext or other, and to make him accept a sum of money.”

I was summoned to appear, and I appeared. I saw M. de Sartine, ‘sedentem pro tribunali’. At the end of the sitting he told me that he was obliged to remand me, and that during my remand I must not leave Paris or get married, as all my civil rights were in suspense pending the decision. I promised to follow his commands.

I acknowledged in my examination that I was at the ball in a black domino on the night named in my accusation, but I denied everything else. As for Mdlle. X. C. V., I said that neither I nor anyone of her family had any suspicion that she was with child.

Recollecting that I was an alien, and that this circumstance might make Vauversin call for my arrest, on the plea that I might fly the kingdom, I thought the moment opportune for making interest with the clerk of the court, and I accordingly paid him a visit. After telling him of my fears, I slipped into his hand a packet of three hundred louis, for which I did not ask for a receipt, saying that they were to defray expenses if I were mulcted in costs. He advised me to require the midwife to give bail for her appearance, and I told my attorney to do so; but, four days after, the following incident took place:

I was walking in the Temple Gardens, when I was accosted by a Savoyard, who gave me a note in which I was informed that somebody in an alley, fifty paces off, wanted to speak to me. “Either a love affair or a challenge,” I said to myself, “let’s see.” I stopped my carriage, which was following me, and went to the place.

I cannot say how surprised I was to see the wretched Cartel-Bajac standing before me. “I have only a word to say,” said he, when he saw me. “We will not be overheard here. The midwife is quite sure that you are the man who brought a pregnant lady to her, but she is vexed that you are accused of making away with her. Give her a hundred louis; she will then declare to the court that she has been mistaken, and your trouble will be ended. You need not pay the money till she has made her declaration; we will take your word for it. Come with me and talk it over with Vauversin. I am sure he will persuade you to do as I suggest. I know where to find him, follow me at some distance.”

I had listened to him in silence, and I was delighted to see that the rascals were betraying themselves. “Very good,” said I to the fellow, “you go on, and I will follow.” I went after him to the third floor of a house in the Rue aux Ours, where I found Vauversin the barrister. No sooner had I arrived than he went to business without any prefatory remarks.

“The midwife,” he said, “will call on you with a witness apparently with the intention of maintaining to your face that you are her man; but she won’t be able to recognize you. She will then proceed with the witness to the court, and will declare that she has made a mistake, and the criminal lieutenant will forthwith put an end to the proceedings. You will thus be certain of gaining your case against the lady’s mother.”