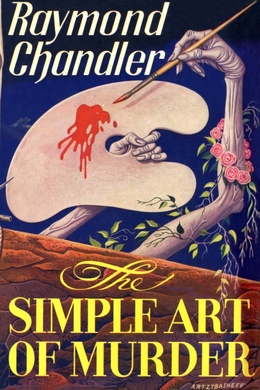 The Simple Art of Murder

Prefaced by the famous Atlantic Monthly essay of the same name, in which he argues the virtues of the hard-boiled detective novel, this collection mostly drawn from stories he wrote for the pulps demonstrates Chandler’s imaginative, entertaining facility with the form. Contains the following short stories: - Spanish Blood - I’ll Be Waiting - The King in Yellow - Pearls Are a Nuisance - Pickup on Noon Street - Smart-Aleck Kill - Guns at Cyrano’s - Nevada Gas.

At one o’clock in the morning, Carl, the night porter, turned down the last of three table lamps in the main lobby of the Windermere Hotel. The blue carpet darkened a shade or two and the walls drew back into remoteness. The chairs filled with shadowy loungers. In the corners were memories like cobwebs.

Tony Reseck yawned. He put his head on one side and listened to the frail, twittery music from the radio room beyond a dim arch at the far side of the lobby. He frowned. That should be his radio room after one A.M. Nobody should be in it. That red-haired girl was spoiling his nights.

The frown passed and a miniature of a smile quirked at the corners of his lips. He sat relaxed, a short, pale, paunchy, middle-aged man with long, delicate fingers clasped on the elk’s tooth on his watch chain; the long delicate fingers of a sleight-of-hand artist, fingers with shiny, molded nails and tapering first joints, fingers a little spatulate at the ends. Handsome fingers. Tony Reseck rubbed them gently together and there was peace in his quiet sea-gray eyes.

The frown came back on his face. The music annoyed him. He got up with a curious litheness, all in one piece, without moving his clasped hands from the watch chain. At one moment he was leaning back relaxed, and the next he was standing balanced on his feet, perfectly still, so that the movement of rising seemed to be a thing perfectly perceived, an error of vision….

He walked with small, polished shoes delicately across the blue carpet and under the arch. The music was louder. It contained the hot, acid blare, the frenetic, jittering runs of a jam session. It was too loud. The red-haired girl sat there and stared silently at the fretted part of the big radio cabinet as though she could see the band with its fixed professional grin and the sweat running down its back. She was curled up with her feet under her on a davenport which seemed to contain most of the cushions in the room. She was tucked among them carefully, like a corsage in the florist’s tissue paper.

She didn’t turn her head. She leaned there, one hand in a small fist on her peach-colored knee. She was wearing lounging pajamas of heavy ribbed silk embroidered with black lotus buds.

The girl moved her eyes slowly. The light in there was dim, but the violet of her eyes almost hurt. They were large, deep eyes without a trace of thought in them. Her face was classical and without expression.

Tony smiled and moved his fingers at his sides, one by one, feeling them move. “You like Goodman, Miss Cressy?” he repeated gently.

“Not to cry over,” the girl said tonelessly.

Tony rocked back on his heels and looked at her eyes. Large, deep, empty eyes. Or were they? He reached down and muted the radio.

“Don’t get me wrong,” the girl said. “Goodman makes money, and a lad that makes legitimate money these days is a lad you have to respect. But this jitterbug music gives me the backdrop of a beer flat. I like something with roses in it.”

“I wasn’t kidding you, Miss Cressy. I think Mozart was the greatest man that ever lived—and Toscanini is his prophet.”

“I thought you were the house dick.” She put her head back on a pillow and stared at him through her lashes.

“Make me some of that Mozart,” she added.

She gave him another long lucid glance. “Got the eye on me, haven’t you, flatfoot?” She laughed a little, almost under her breath. “What did I do wrong?”

Tony smiled his toy smile. “Nothing, Miss Cressy. Nothing at all. But you need some fresh air. You’ve been five days in this hotel and you haven’t been outdoors. And you have a tower room.”

She laughed again. “Make me a story about it. I’m bored.”

“There was a girl here once had your suite. She stayed in the hotel a whole week, like you. Without going out at all, I mean. She didn’t speak to anybody hardly. What do you think she did then?”

The girl eyed him gravely. “She jumped her bill.”

He put his long delicate hand out and turned it slowly, fluttering the fingers, with an effect almost like a lazy wave breaking. “Unh-uh. She sent down for her bill and paid it. Then she told the hop to be back in half an hour for her suitcases. Then she went out on her balcony.”

The girl leaned forward a little, her eyes still grave, one hand capping her peach-colored knee. “What did you say your name was?”

“All the tower suites have private balconies, Miss Cressy. The walls of them are too low for fourteen stories above the street. It was a dark night, that night, high clouds.” He dropped his hand with a final gesture, a farewell gesture.