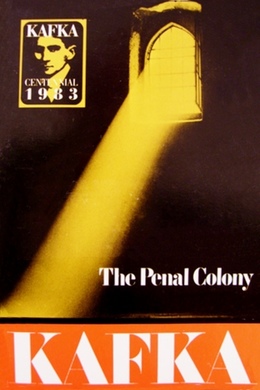 In the Penal Colony

The story is set in an unnamed penal colony. Internal clues and the setting on an island suggest Octave Mirbeau’s The Torture Garden as an influence. As in some of Kafka’s other writings, the narrator in this story seems detached from, or perhaps numbed by, events that one would normally expect to be registered with horror. In the Penal Colony describes the last use of an elaborate torture and execution device that carves the sentence of the condemned prisoner on his skin in a script before letting him die, all in the course of twelve hours. As the plot unfolds, the reader learns more and more about the machine, including its origin, and original justification.

“It’s a peculiar apparatus,” said the Officer to the Traveler, gazing with a certain admiration at the device, with which he was, of course, thoroughly familiar. It appeared that the Traveler had responded to the invitation of the Commandant only out of politeness, when he had been invited to attend the execution of a soldier condemned for disobeying and insulting his superior. Of course, interest in the execution was not very high, not even in the penal colony itself. At least, here in the small, deep, sandy valley, closed in on all sides by barren slopes, apart from the Officer and the Traveler there were present only the Condemned, a vacant-looking man with a broad mouth and dilapidated hair and face, and the Soldier, who held the heavy chain to which were connected the small chains which bound the Condemned Man by his feet and wrist bones, as well as by his neck, and which were also linked to each other by connecting chains. The Condemned Man had an expression of such dog-like resignation that it looked as if one could set him free to roam around the slopes and would only have to whistle at the start of the execution for him to return.

The Traveler had little interest in the apparatus and walked back and forth behind the Condemned Man, almost visibly indifferent, while the Officer took care of the final preparations. Sometimes he crawled under the apparatus, which was built deep into the earth, and sometimes he climbed up a ladder to inspect the upper parts. These were really jobs which could have been left to a mechanic, but the Officer carried them out with great enthusiasm, maybe because he was particularly fond of this apparatus or maybe because there was some other reason why one could not trust the work to anyone else. “It’s all ready now!” he finally cried and climbed back down the ladder. He was unusually tired, breathing with his mouth wide open, and he had pushed two fine lady’s handkerchiefs under the collar of his uniform.

“These uniforms are really too heavy for the tropics,” the Traveler said, instead of asking some questions about the apparatus, as the Officer had expected. “That’s true,” said the Officer. He washed the oil and grease from his dirty hands in a bucket of water standing ready, “but they mean home, and we don’t want to lose our homeland.” “Now, have a look at this apparatus,” he added immediately, drying his hands with a towel and pointing to the device. “Up to this point I had to do some work by hand, but from now on the apparatus should work entirely on its own.” The Traveler nodded and followed the Officer. The latter tried to protect himself against all eventualities by saying, “Of course, breakdowns do happen. I really hope none will occur today, but we must be prepared for it. The apparatus is supposed to keep going for twelve hours without interruption. But if any breakdowns do occur, they’ll only be very minor, and we’ll deal with them right away.”

“Don’t you want to sit down?” he asked finally, as he pulled out a chair from a pile of cane chairs and offered it to the Traveler. The latter could not refuse. He sat on the edge of the pit, into which he cast a fleeting glance. It was not very deep. On one side of the hole the piled earth was heaped up into a wall; on the other side stood the apparatus. “I don’t know,” the officer said, “whether the Commandant has already explained the apparatus to you.” The Traveler made an vague gesture with his hand. That was good enough for the Officer, for now he could explain the apparatus himself.

“This apparatus,” he said, grasping a connecting rod and leaning against it, “is our previous Commandant’s invention. I also worked with him on the very first tests and took part in all the work right up to its completion. However, the credit for the invention belongs to him alone. Have you heard of our previous Commandant? No? Well, I’m not claiming too much when I say that the organization of the entire penal colony is his work. We, his friends, already knew at the time of his death that the administration of the colony was so self-contained that even if his successor had a thousand new plans in mind, he would not be able to alter anything of the old plan, at least not for several years. And our prediction has held. The New Commandant has had to recognize that. It’s a shame that you didn’t know the previous Commandant!”