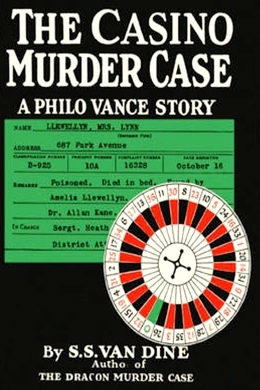 It was in the cold bleak autumn following the spectacular Dragon murder case that Philo Vance was confronted with what was probably the subtlest and most diabolical criminal problem of his career. Unlike his other cases, this mystery was one of poisoning. But it was not an ordinary poisoning case: it involved far too clever a technique, and was thought out to far too many decimal points, to be ranked with even such famous crimes as the Cordelia Botkin, Molineux, Maybrick, Buchanan, Bowers and Carlyle Harris cases.

The designation given to it by the newspapers—namely, the Casino murder case—was technically a misnomer, although Kinkaid’s famous gambling Casino in West 73rd Street played a large part in it. In fact, the first sinister episode in this notorious crime actually occurred beside the high-stake roulette table in the “Gold Room” of the Casino; and the final episode of the tragedy was enacted in Kinkaid’s walnut-paneled Jacobean office, just off the main gambling salon.

Incidentally, I may say that that last terrible scene will haunt me to my dying day and send cold shivers racing up and down my spine whenever I let my mind dwell on its terrifying details. I have been through many shocking and unnerving situations with Vance during the course of his criminal investigations, but never have I experienced one that affected me as did that terrific and fatal dénouement that came so suddenly, so unexpectedly, in the gaudy environment of that famous gambling rendezvous.

And Markham, too, I know, underwent some chilling metamorphosis in those few agonizing moments when the murderer stood before us and cackled in triumph. To this day, the mere mention of the incident makes Markham irritable and nervous—a fact which, considering his usual calm, indicates clearly how deep and lasting an impression the tragic affair made upon him.

The Casino murder case, barring that one fatal terminating event, was not so spectacular in its details as many other criminal cases which Vance had probed and solved. From a purely objective point of view it might even have been considered commonplace; for in its superficial mechanism it had many parallels in well-known cases of criminological history. But what distinguished this case from its many antetypes was the subtle inner processes by which the murderer sought to divert suspicion and to create new and more devilish situations wherein the real motive of the crime was to be found. It was not merely one wheel within another wheel: it was an elaborate and complicated piece of psychological machinery, the mechanism of which led on and on, almost indefinitely, to the most amazing—and erroneous—conclusions.

Indeed, the first move of the murderer was perhaps the most artful act of the entire profound scheme. It was a letter addressed to Vance thirty-six hours before the mechanism of the plot was put in direct operation. But, curiously enough, it was this supreme subtlety that, in the end, led to the recognition of the culprit. Perhaps this act of letter-writing was too subtle: perhaps it defeated its own purpose by calling mute attention to the mental processes of the murderer, and thereby gave Vance an intellectual clue which fortunately diverted his efforts from the more insistent and more obvious lines of ratiocination. In any event, it achieved its superficial object; for Vance was actually a spectator of the first thrust, so to speak, of the villain’s rapier.

And, as an eye witness to the first episode of this famous poison murder mystery, Vance became directly involved in the case; so that, in this instance, he carried the problem to John F.-X. Markham, who was then the District Attorney of New York County and Vance’s closest friend; whereas, in all his other criminal investigations, it was Markham who had been primarily responsible for Vance’s participation.