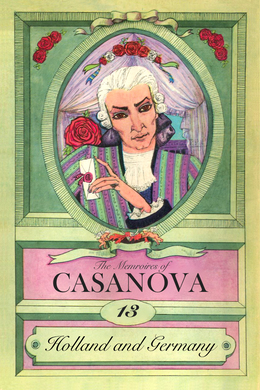 In this unique travelogue, Casanova explains his experiences in Holland and Germany. This is a work that examines the two countries, their culture, society and attitudes of the people. In this engrossing work, the author also gives an insight into his own feelings.

Portrait of the Pretended Countess Piccolomini–Quarrel and Duel–Esther and Her Father, M. D’O.–Esther Still Taken with the Cabala–Piccolomini Forges a Bill of Exchange: Results I Am Fleeced, and in Danger of Being Assassinated–Debauch with the Two Paduan Girls–I Reveal A Great Secret To Esther–I Bate the Rascally St. Germain; His Flight–Manon Baletti Proves Faithless to Me; Her Letter Announcing Her Marriage: My Despair– Esther Spends a Day With Me–My Portrait and My Letters to Manon Get Into Esther’s Hands–I Pass a Day with Her–We Talk of Marrying Each Other

The so-called Countess Piccolomini was a fine example of the adventurers. She was young, tall, well-made, had eyes full of fire, and skin of a dazzling whiteness; not, however, that natural whiteness which delights those who know the value of a satin skin and rose petals, but rather that artificial fairness which is commonly to be seen at Rome on the faces of courtezans, and which disgusts those who know how it is produced. She had also splendid teeth, glorious hair as black as jet, and arched eyebrows like ebony. To these advantages she added attractive manners, and there was something intelligent about the way she spoke; but through all I saw the adventuress peeping out, which made me detest her.

As she did not speak anything but Italian the countess had to play the part of a mute at table, except where an English officer named Walpole was concerned, who, finding her to his taste, set himself to amuse her. I felt friendly disposed towards this Englishman, though my feelings were certainly not the result of sympathy. If I had been blind or deaf Sir James Walpole would have been totally indifferent to me, as what I felt for him was the result of my observation.

Although I did not care for the countess, for all that I went up to her room after dinner with the greater part of the guests. The count arranged a game of whist, and Walpole played at primero with the countess, who cheated him in a masterly manner; but though he saw it he laughed and paid, because it suited his purpose to do so. When he had lost fifty Louis he called quarter, and the countess asked him to take her to the theatre. This was what the good-natured Englishman wanted; and he and the countess went off, leaving the husband playing whist.

I, too, went to the play, and as chance would have it my neighbour in the pit was Count Tot, brother to the count famous for his stay in Constantinople.

We had some conversation together, and he told me he had been obliged to leave France on account of a duel which he had had with a man who had jested with him for not being present at the battle of Minden, saying that he had absented himself in view of the battle. The count had proved his courage with the sword on the other’s body–a rough kind of argument which was fashionable then as now. He told me he had no money, and I immediately put my purse at his service; but, as the saying goes, a kindness is never thrown away, and five years later he did the same by me at St. Petersburg. Between the acts he happened to notice the Countess Piccolomini, and asked me if I knew her husband. “I know him very slightly,” I answered, “but we happen to be staying at the same hotel.”

“He’s a regular black sheep,” said the count, “and his wife’s no better than he.”

It seemed that they had already won a reputation in the town.

After the play I went back to the hotel by myself, and the head-waiter told me that Piccolomini had set out hot-foot with his servant, his only luggage being a light portmanteau. He did not know the reason of this sudden departure, but a minute afterwards the countess came in, and her maid having whispered something to her she told me that the count had gone away because he had fought a duel but that often happened. She asked me to sup with her and Walpole, and her appetite did not seem to suffer from the absence of her spouse.

Just as we were finishing supper, an Englishman, who had been of the whist party, came up and told Walpole that the Italian had been caught cheating and had given the lie to their fellow Englishman, who had detected him, and that they had gone out together. An hour afterwards the Englishman returned with two wounds, one on the fore-arm and one on the shoulder. It was a trifling affair altogether.

Next day, after I had had dinner with the Comte d’Afri, I found a letter from Piccolomini, with an enclosure addressed to the countess, waiting for me at the inn. He begged me to give his wife the letter, which would inform her of his plans, and then to bring her to the Ville de Lyon at Amsterdam, where he was staying. He wanted to know how the Englishman whom he had wounded was getting on.