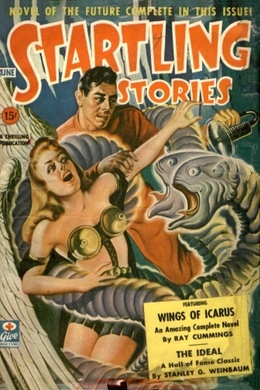 Charlon, Ruler of the Bat People of Neptune, Puts Tremendous Obstacles in the Way of Three Spaceteers of Earth—and Jeopardizes the Destinies of Two Planets!

It all began one evening last Summer, in July, 3042. I was at home when my audio-visual buzzed. It was my boss, Jonathan Edwards, Director of Raw Materials, Branch 2.

“Pleasure, or business, Chief?” I asked him.

“Business. Sorry. Your holiday is cancelled.” I’d never seen him so grim before; ordinarily he’s a smiling sort of fellow. “I want you to look up Navigator 1410, Interplanetary Transport Service. Evans. He’s a friend of yours, isn’t he?”

“Chick Evans? He sure is. But I haven’t seen him for ages.”

“He’s in the city,” the boss told me. “On holiday. But that’s over. I’ve drafted him. I want you to report with him at once. This is important, Alan.”

Nobody would question my boss when he was in a mood like this. So I made inquiries.

“I’m to bring him to Federal Supply Building?”

The instrument clicked off. Fortunately, Chick was at home. His pug-nosed freckled face, with the shock of tousled red hair above it, was clear on the mirror-grid.

“That’s cancelled,” I said. “My boss, Jonathan Edwards, has drafted you. We’re to report at once. I’ll fly right over.”

Chick Evans was not a bit pleased and he did not mind saying so. He is a belligerent little fellow, three years younger than I am. I am twenty-six. My name is Alan Frane. As persons know from the Government newscasters who have given this Neptune affair plenty of publicity, I am Junior Technician in the Raw Materials Division, producing the Nullo-grav units—the electronic counter-charged metallic plates which nullify gravitational force.

Chick Evans did not like laboratory work. He went in for Navigation and got a job on the Earth-Moon run handling one of the ore-freighters which take food and supplies to the Moon-colonists and bring back cargoes of the semi-refined ores.

Evans was waiting for me when I flew over.

“This better be good,” he observed as he climbed into my roller. “I don’t like being drafted.”

He was getting himself all worked up to give my boss a piece of his mind. But he did not. There was an air of grim tenseness in Edwards’ little office-cubby. One could not miss it.

Edwards sat at his big oval desk with a sheaf of teletyped flimsies before him. Just one other man in the room remained in the room with Edwards, a small hunched fellow with a shock of white hair. He was Peter Green, Chief Advisory Chemist. Green nodded at me and shook hands gravely with Chick Evans. Then he spoke to the boss.

“You’d better isolate us, Edwards. We’ve got to talk plainly.”

Chick Evans and I exchanged startled glances as the barrage-current went into the metal walls of the room with a faint hiss. Not until then did Green venture to speak.

“Do you young men know enough to keep your mouths shut?” he inquired.

Edwards answered for us.

“This is what I’ve got to tell you. Here are the latest reports from our mines in the Andes and from the Moon. We’re faced with a drastic raw materials shortage. Our supply of Uradonite is giving out.”

Uradonite. Nobody had to tell Chick Evans and me what that would mean. The whole space-flying industry was dependent upon the volatile-active element Z-470. Nullo-grav units had made vessels weightless. But that could not provide propulsion. Then came the Mansfield cyclotronic engine, a power unit by which the immensely heavy atoms of Z-470 were broken down into electronic streams, the rocket-streams by which all space-flyers are propelled.

“We’re using too much Uradonite,” Edwards was saying. “The rapidly expanding Space-transportation Industries need more all the time. The Moon as you know is our chief source of supply—and the veins there are drying up—”

“Drying up?” the little chemist Green exclaimed. “They are almost dry now. Take a look at Macdonald’s latest report This shipment of semi-refined ore that just came in today from him—the lowest grade he’s ever sent. What am I supposed to do with stuff like that? Refine down a ton of it to get a pound of commercial Uradonite?”

Chick Evans and I could only stare at each other, numbed. The news certainly hit Chick between the eyes. He was a space-flyer.

“Why, good grief,” he murmured, “Without Uradonite we’d be grounded—Earth-bound. If we can’t send flyers to Venus, Mars, the Moon, how are our colonists going to make out?”

Now that this thing is over, the truth may be told.