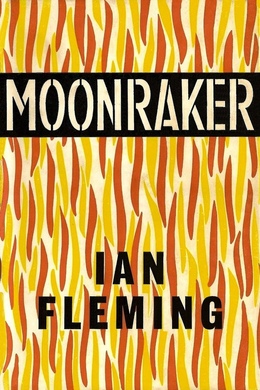 Another adventure from James Bond: 007. Britain’s new ICBM-based national defense system, is ready for testing, but something’s not quite right. At M’s request, Bond begins his investigation with Sir Hugo Drax, the leading card shark at M’s club, who is also the head of the Moonraker project. But once Bond delves deeper into the goings-on at the Moonraker base, he discovers that both the project and its leader are something other than they appear to be.

The walls of the underground room took the crash of sound and batted it to and fro between them until there was silence. James Bond watched the smoke being sucked from each end of the room towards the central Ventaxia fan. The memory in his right hand of how he had drawn and fired with one sweep from the left made him confident. He broke the chamber sideways out of the Colt Detective Special and waited, his gun pointing at the floor, while the Instructor walked the twenty yards towards him through the half-light of the gallery.

Bond saw that the Instructor was grinning. “I don’t believe it,” he said. “I got you that time.”

The Instructor came up with him. “I’m in hospital, but you’re dead, sir,” he said. In one hand he held the silhouette target of the upper body of a man. In the other a polaroid film, postcard size. He handed this to Bond and they turned to a table behind them on which there was a green-shaded desk-light and a large magnifying glass.

Bond picked up the glass and bent over the photograph. It was a flash-light photograph of him. Around his right hand there was a blurred burst of white flame. He focused the glass carefully on the left side of his dark jacket. In the centre of his heart there was a tiny pinpoint of light.

Without speaking, the Instructor laid the big white man-shaped target under the lamp. Its heart was a black bullseye, about three inches across. Just below and half an inch to the right was the rent made by Bond’s bullet.

“Through the left wall of the stomach and out at the back,” said the Instructor, with satisfaction. He took out a pencil and scribbled an addition on the side of the target. “Twenty rounds and I make it you owe me seven-and-six, sir,” he said impassively.

Bond laughed. He counted out some silver. “Double the stakes next Monday,” he said.

“That’s all right with me,” said the Instructor. “But you can’t beat the machine, sir. And if you want to get into the team for the Dewar Trophy we ought to give the thirty-eights a rest and spend some time on the Remington. That new long twenty-two cartridge they’ve just brought out is going to mean at least 7900 out of a possible 8000 to win. Most of your bullets have got to be in the X-ring and that’s only as big as a shilling when it’s under your nose. At a hundred yards it isn’t there at all.”

“To hell with the Dewar Trophy,” said Bond. “It’s your money I’m after.” He shook the unfired bullets in the chamber of his gun into his cupped hand and laid them and the gun on the table. “See you Monday. Same time?”

“Ten o’clock’ll be fine, sir,” said the Instructor, jerking down the two handles on the iron door. He smiled at Bond’s back as it disappeared up the steep concrete stairs leading to the ground floor. He was pleased with Bond’s shooting, but he wouldn’t have thought of telling him that he was the best shot in the Service. Only M. was allowed to know that, and his Chief of Staff, who would be told to enter the scores of that day’s shoot on Bond’s Confidential Record.

Bond pushed through the green baize door at the top of the basement steps and walked over to the lift that would take him up to the eighth floor of the tall, grey building near Regent’s Park that is the headquarters of the Secret Service. He was satisfied with his score but not proud of it. His trigger finger twitched in his pocket as he wondered how to conjure up that little extra flash of speed that would beat the machine, the complicated box of tricks that sprung the target for just three seconds, fired back at him with a blank.38, and shot a pencil of light aimed at him and photographed it as he stood and fired from the circle of chalk on the floor.

The lift doors sighed open and Bond got in. The liftman could smell the cordite on him. They always smelled like that when they came up from the shooting gallery. He liked it. It reminded him of the Army. He pressed the button for the eighth and rested the stump of his left arm against the control handle.

If only the light was better, thought Bond. But M. insisted that all shooting should be done in averagely bad conditions. A dim light and a target that shot back at you was as close as he could get to copying the real thing. ‘Shooting hell out of a piece of cardboard doesn’t prove anything’ was his single-line introduction to the Small-arms Defence Manual.

The lift eased to a stop and as Bond stepped out into the drab Ministry-of-Works-green corridor and into the bustling world of girls carrying files, doors opening and shutting, and muted telephone bells, he emptied his mind of all thoughts of his shoot and prepared himself for the normal business of a routine day at Headquarters.