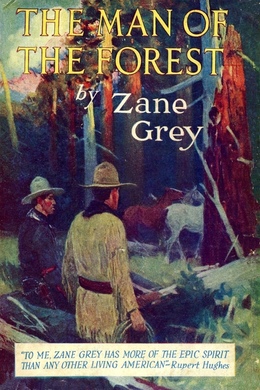 The Man of the Forest

Accidentally overhearing a plot to kidnap the niece of a prominent rancher as she arrives from the East, Milt Dale springs into action. He comes out of his splendid isolation to protect Helen and her kid sister, Bo. Leading them away from manmade danger, exposing them to unaccustomed rigor on mountain trails, Dale imparts his rugged philosophy. Beyond the forest, Beasley and Snake Anson are still waiting to carry out their evil plot.

At sunset hour the forest was still, lonely, sweet with tang of fir and spruce, blazing in gold and red and green; and the man who glided on under the great trees seemed to blend with the colors and, disappearing, to have become a part of the wild woodland.

Old Baldy, highest of the White Mountains, stood up round and bare, rimmed bright gold in the last glow of the setting sun. Then, as the fire dropped behind the domed peak, a change, a cold and darkening blight, passed down the black spear-pointed slopes over all that mountain world.

It was a wild, richly timbered, and abundantly watered region of dark forests and grassy parks, ten thousand feet above sea-level, isolated on all sides by the southern Arizona desert–the virgin home of elk and deer, of bear and lion, of wolf and fox, and the birthplace as well as the hiding-place of the fierce Apache.

September in that latitude was marked by the sudden cool night breeze following shortly after sundown. Twilight appeared to come on its wings, as did faint sounds, not distinguishable before in the stillness.

Milt Dale, man of the forest, halted at the edge of a timbered ridge, to listen and to watch. Beneath him lay a narrow valley, open and grassy, from which rose a faint murmur of running water. Its music was pierced by the wild staccato yelp of a hunting coyote. From overhead in the giant fir came a twittering and rustling of grouse settling for the night; and from across the valley drifted the last low calls of wild turkeys going to roost.

To Dale’s keen ear these sounds were all they should have been, betokening an unchanged serenity of forestland. He was glad, for he had expected to hear the clipclop of white men’s horses–which to hear up in those fastnesses was hateful to him. He and the Indian were friends. That fierce foe had no enmity toward the lone hunter. But there hid somewhere in the forest a gang of bad men, sheep-thieves, whom Dale did not want to meet.

As he started out upon the slope, a sudden flaring of the afterglow of sunset flooded down from Old Baldy, filling the valley with lights and shadows, yellow and blue, like the radiance of the sky. The pools in the curves of the brook shone darkly bright. Dale’s gaze swept up and down the valley, and then tried to pierce the black shadows across the brook where the wall of spruce stood up, its speared and spiked crest against the pale clouds. The wind began to moan in the trees and there was a feeling of rain in the air. Dale, striking a trail, turned his back to the fading afterglow and strode down the valley.

With night at hand and a rain-storm brewing, he did not head for his own camp, some miles distant, but directed his steps toward an old log cabin. When he reached it darkness had almost set in. He approached with caution. This cabin, like the few others scattered in the valleys, might harbor Indians or a bear or a panther. Nothing, however, appeared to be there. Then Dale studied the clouds driving across the sky, and he felt the cool dampness of a fine, misty rain on his face. It would rain off and on during the night. Whereupon he entered the cabin.

And the next moment he heard quick hoof-beats of trotting horses. Peering out, he saw dim, moving forms in the darkness, quite close at hand. They had approached against the wind so that sound had been deadened. Five horses with riders, Dale made out–saw them loom close. Then he heard rough voices. Quickly he turned to feel in the dark for a ladder he knew led to a loft; and finding it, he quickly mounted, taking care not to make a noise with his rifle, and lay down upon the floor of brush and poles. Scarcely had he done so when heavy steps, with accompaniment of clinking spurs, passed through the door below into the cabin.

“Wal, Beasley, are you here?” queried a loud voice.

There was no reply. The man below growled under his breath, and again the spurs jingled.

“Fellars, Beasley ain’t here yet,” he called. “Put the hosses under the shed. We’ll wait.”

“Shut up, Moze. Reckon you’re no good for anythin’ but eatin’. Put them hosses away an’ some of you rustle fire-wood in here.”

Low, muttered curses, then mingled with dull thuds of hoofs and strain of leather and heaves of tired horses.

“Snake, it’d been sense to fetch a pack along,” drawled this newcomer.

“Reckon so, Jim. But we didn’t, an’ what’s the use hollerin’? Beasley won’t keep us waitin’ long.”