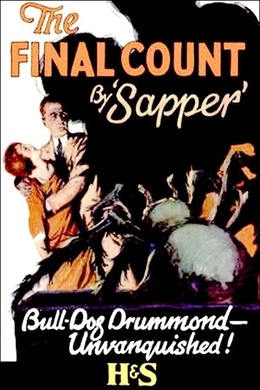 When Robin Gaunt, inventor of a terrifyingly powerful weapon of chemical warfare, goes missing, the police suspect that he has ‘sold out’ to the other side. But Bulldog Drummond is convinced of his innocence, and can think of only one man brutal enough to use the weapon to hold the world to ransom. Drummond receives an invitation to a sumptuous dinner-dance aboard an airship that is to mark the beginning of his final battle for triumph.

It was on a warm evening towards the end of April 1927 that the first act took place, though it is safe to say that there has never been any connection in the public mind up till this day between it and what came after. I was dining at Prince’s with Robin Gaunt, a young and extremely brilliant scientist, and a very dear friend of mine. We had been at school together and at Cambridge; and though we had lost sight of one another during the war, the threads of friendship had been picked up again quite easily at the conclusion of that foolish performance. I had joined the Gunners, whilst he, somewhat naturally, had gravitated towards the Royal Engineers. For a year or two, doubtless bearing in mind his really extraordinary gifts, the powers that be ordained that he should make roads, a form of entertainment of which he knew less than nothing. And Robin smiled thoughtfully and made roads. At least he did so officially: in reality he did other things, whilst a sergeant with a penchant for rum superintended the steam roller. And then one day came a peremptory order from G.H.Q. that Lieutenant Robin Gaunt, R. E., should cease making roads, and should report himself at the seats of the mighty at once. And Robin, still smiling thoughtfully, reported himself. As I have said, he had been doing other things during that eighteen months, and the fruits of his labours, sent direct and not through the usual official channels, lay on the table in front of the man to whom he reported.

From then on Robin became a mysterious and shadowy figure. I met him once on the leave boat going home, but he was singularly uncommunicative. He was always a silent sort of fellow, though on the rare occasions when he chose to talk he could be brilliant. But during that crossing he was positively taciturn.

He looked ill and I told him so.

‘Eighteen hours a day, old John, for eleven months on end. That’s what I’ve been doing, and I’m tired.’

He lit a cigarette and stared over the water.

‘Can you take it easy now?’ I asked him.

He gave a weary little smile.

‘If you mean by that, have I finished, then I can—more or less. But if you mean, can I take it easy from a mental point of view, God knows. I’ll not have to work eighteen hours a day any more, but there are worse things than physical exhaustion.’

And suddenly he laid his hand on my arm.

‘I know they’re Huns,’ he said tensely: ‘I know it’s just one’s bounden duty to use every gift one has been given to beat ‘em. But, damn it, John—they’re men too. They go back to their women-kind, just as all these fellows on this boat are going back to theirs.’

He paused, and I thought he was going to say something more. But he didn’t: he just gave a short laugh and led the way through the crowd to the bar.

‘A drink, John, and forget what I’ve been saying.’

That was in July ‘18, and I didn’t see him again till after the Armistice. We met in London, and at lunch I started pulling his leg over his eighteen hours’ work a day. He listened with a faint smile, and for a long while refused to be drawn. And it was only when the waiter went off to get change for the bill that he made a remark which for many months stuck in my mind.

‘There are a few things in my life that I’m thankful for, John,’ he said quietly. ‘And the one that I’m most thankful for is that the Boches broke when they did. For if they hadn’t…’

‘There wouldn’t have been any Boches left to break.’

‘And a damned good thing too,’ I exclaimed.

He shrugged his shoulders.

‘They’re men too, as I said before. However, in Parliamentary parlance the situation does not arise. Wherefore, since it’s Tuesday today and Wednesday tomorrow, we might have another brandy.’

And with that the conversation closed. Periodically during the next few months that remark of his came back to my mind.

‘There wouldn’t have been any Boches left to break.’

An exaggeration, of course: a figure of speech, and yet Robin Gaunt was not given to the use of vain phrases. Years of scientific training had made him meticulously accurate in his use of words; and, certainly, if one-tenth of the wild rumours that circulated round the military Hush-Hush department was true, there might be some justification for his remark. But after a time I forgot all about it, and when Robin alluded to the matter at dinner on that evening in April I had to rack my brains to remember what he was talking about.

I’d suggested a play, but he had shaken his head.

‘I’ve an appointment, old man, tonight which I can’t break. Remember my eighteen hours’ work a day that you were so rude about?’

It took me a second or two to get the allusion.

‘Great Scott!’ I laughed, ‘that was the war to end war, my boy. To make the world safe for heroes to live in, with further slush ad nauseam. You don’t mean to say that you are still dabbling in horrors?’