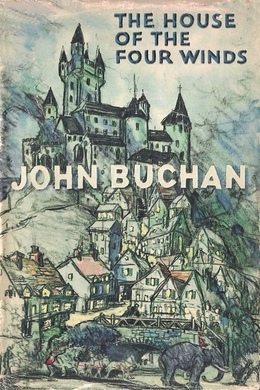 The House of the Four Winds

The Republican Government of Evallonia is failing, and there is a throne waiting for someone. But there are two claimants, and each one is so strong that the kingdom hangs in the balance. The Glasgow gang known as the Gorbals Die-hards cannot resist the temptation to get involved in such a tantalising situation. One by one they turn up where the danger appears keenest, ostensibly for the most peaceable reasons. But they are soon plotting and scheming as deeply as the citizens of Evallonia. Jaikie Galt is lured into the plot by Randal Glynde (who steps in at an upper window one night from the back of an elephant). Dickson McCunn, the middle-aged grocer, impersonates an archduke, wearing the purple as if born to it, and of course Archie Roylance and Dougal are there too.

The inn at Kremisch, the Stag with the Two Heads, has an upper room so bowed with age that it leans drunkenly over the village street. It is a bare place, which must be chilly in winter, for the old casement has many chinks in it, and the china stove does not look efficient, and the rough beechen table, marked by many beer mugs, and the seats of beechwood and hide are scarcely luxurious. But on this summer night to one who had been tramping all day on roads deep in white dust under a merciless sun it seemed a haven of ease. Jaikie had eaten an admirable supper on a corner of the table, a supper of cold ham, an omelet, hot toasted rye-cakes and a seductive cheese. He had drunk wine tapped from a barrel and cold as water from a mountain spring, and had concluded with coffee and cream in a blue cup as large as a basin. Now he could light his pipe and watch the green dusk deepen behind the onion spire of the village church.

The milestones in his journey had been the wines. Jaikie was no connoisseur, and indeed as a rule preferred beer, but the vintage of a place seemed to give him the place’s flavour and wines made a diary of his pilgrimage. His legs bore him from valley to valley, but he drank himself from atmosphere to atmosphere. He had begun among strong burgundies which needed water to make a thirst- quenching drink, and continued through the thin wines of the hills to the coarse red stuff of south Germany and a dozen forgotten little local products. In one upland place he had found a drink like the grey wine of Anjou, in another a sweet thing like Madeira, and in another a fiery sherry. Each night at the end of his tramp he concocted a long drink, and he stuck manfully to the juice of the grape; so, having a delicate palate and a good memory, he had now behind him a map of his track picked out in honest liquors.

Each was associated with some vision of sun-drenched landscape. He had been a month on the tramp, but he seemed to have walked through continents. As he half dozed at the open window, it was pleasant to let his fancy run back along the road. It had led him through vineyards grey at the fringes with dust, through baking beet-fields and drowsy cornlands and solemn forests; up into wooded hills and flowery meadows, and once or twice almost into the jaws of the great mountains; through every kind of human settlement, from hamlets which were only larger farms to brisk burghs clustered round opulent town-houses or castles as old as Charlemagne; by every kind of stream–unfordable great rivers, and milky mountain- torrents, and reedy lowland waters, and clear brooks slipping through mint and water-cress. He had walked and walked, seeking to travel and not to arrive, and making no plans except that his face was always to the sunrise. He was very dimly aware at any moment of his whereabouts, for his sole map was a sketchy thing out of a Continental Bradshaw.

But he had walked himself into contentment. At the start he had been restless and lonely. He wished that he could have brought Woolworth, now languishing at Blaweary, but he could not condemn that long-suffering terrier to months of quarantine. He wrote disconsolate letters to Alison in his vile handwriting, and received from her at various postes-restantes replies which revealed the dullness of her own life at Unnutz. She had nothing to write about, and it was never her habit to spoil good paper with trivial reflections. There was a time at the start when Jaikie’s mind had been filled with exasperating little cares, so that he turned a blank face to the world he was traversing. His future– what was he to do now that he was done with Cambridge? Alison–his need of her grew more desperate every day, but what could he offer her worthy of her acceptance? Only his small dingy self, he concluded, with nothing to his credit except a second-class degree, some repute at Rugby football, and the slenderest of bank balances. It seemed the most preposterous affair of a moth and a star.

But youth and the sun and wide spaces played their old healing part. He began to rise whistling from his bed in a pinewood or in a cheap country inn, with a sense that the earth was very spacious and curious. The strong aromatic sunlight drugged him into cheerfulness. The humours of the road were spread before him. He had learned to talk French fairly well, but his German was scanty; nevertheless, he had the British soldier’s gift of establishing friendship on a meagre linguistic basis, and he slipped inside the life of sundry little communities. His passion for new landscapes made every day’s march a romance, and, having a love of the human comedy, he found each night’s lodging an entertainment. He understood that he was looking at things in a new perspective. What had seemed a dull track between high walls was now expanding into open country.