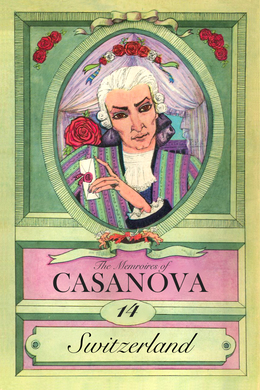 I Resolve to become a monk, going to confessions. I alter my mind and dine with the Abbot. Upon leanving for Zurich - comic adventures at Baden. i act in a play, and counterfeit sickness to attain happiness. I then leave for Soleure then Berne. La Mata Madame de la Saone and finally arrive at Bale.

I Resolve to Become a Monk–I go to Confession–Delay of a Fortnight– Giustiniani, the Apostle Capuchin–I Alter my Mind; My Reasons–My Pranks at the Inn–I Dine With the Abbot

The cool way in which the abbot told these cock-and-bull stories gave me an inclination to laughter, which the holiness of the place and the laws of politeness had much difficulty in restraining. All the same I listened with such an attentive air that his reverence was delighted with me and asked where I was staying.

“Nowhere,” said I; “I came from Zurich on foot, and my first visit was to your church.”

I do not know whether I pronounced these words with an air of compunction, but the abbot joined his hands and lifted them to heaven, as if to thank God for touching my heart and bringing me there to lay down the burden of my sins. I have no doubt that these were his thoughts, as I have always had the look of a great sinner.

The abbot said it was near noon and that he hoped I would do him the honour of dining with him, and I accepted with pleasure, for I had had nothing to eat and I knew that there is usually good cheer in such places. I did not know where I was and I did not care to ask, being willing to leave him under the impression that I was a pilgrim come to expiate my sins.

On our way from the church the abbot told me that his monks were fasting, but that we should eat meat in virtue of a dispensation he had received from Benedict XIV., which allowed him to eat meat all the year round with his guests. I replied that I would join him all the more willingly as the Holy Father had given me a similar dispensation. This seemed to excite his curiosity about myself, and when we got to his room, which did not look the cell of a penitent, he hastened to shew me the brief, which he had framed and glazed and hung up opposite the table so that the curious and scrupulous might have it in full view.

As the table was only laid for two, a servant in full livery came in and brought another cover; and the humble abbot then told me that he usually had his chancellor with him at dinner, “for,” said he, “I have a chancery, since as abbot of Our Lady of Einsiedel I am a prince of the Holy Roman Empire.”

This was a relief to me, as I now knew where I was, and I no longer ran the risk of shewing my ignorance in the course of conversation.

This monastery (of which I had heard before) was the Loretto of the Mountains, and was famous for the number of pilgrims who resorted to it.

In the course of dinner the prince–abbot asked me where I came from, if I were married, if I intended to make a tour of Switzerland, adding that he should be glad to give me letters of introduction. I replied that I was a Venetian, a bachelor, and that I should be glad to accept the letters of introduction he had kindly offered me, after I had had a private conference with him, in which I desired to take his advice on my conscience.

Thus, without premeditation, and scarcely knowing what I was saying, I engaged to confess to the abbot.

This was my way. Whenever I obeyed a spontaneous impulse, whenever I did anything of a sudden, I thought I was following the laws of my destiny, and yielding to a supreme will. When I had thus plainly intimated to him that he was to be my confessor, he felt obliged to speak with religious fervour, and his discourses seemed tolerable enough during a delicate and appetising repast, for we had snipe and woodcock; which made me exclaim,–

“What! game like that at this time of year?”

“It’s a secret,” said he, with a pleased smile, “which I shall be glad to communicate to you.”

The abbot was a man of taste, for though he affected sobriety he had the choicest wines and the most delicious dishes on the table. A splendid salmon-trout was brought, which made him smile with pleasure, and seasoning the good fare with a jest, he said in Latin that we must taste it as it was fish, and that it was right to fast a little.

While he was talking the abbot kept a keen eye on me, and as my fine dress made him feel certain that I had nothing to ask of him he spoke at ease.