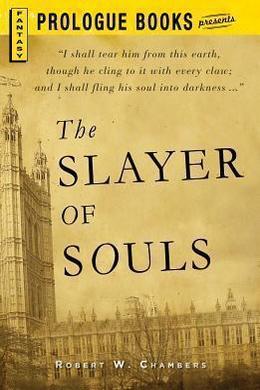 The Slayer Of Souls

An American-born girl, Tressa Norne, has been held in bondage in the Temple of Erlik, an Oriental devil-god of Central Asia. After many years of captivity, Tressa finally escapes to America knowing that a worldwide organization of murderous black magicians, made up of Yezidees and Hassani, are plotting to take over and enslave the world. A secret agent, Victor Cleves, protects and loves Tressa, and with his support, Tressa battles the black magicians who are trying to kill her. Will White Magic triumph over Black?

Only when the Nan-yang Maru sailed from Yuen-San did her terrible sense of foreboding begin to subside.

For four years, waking or sleeping, the awful subconsciousness of supreme evil had never left her.

But now, as the Korean shore, receding into darkness, grew dimmer and dimmer, fear subsided and grew vague as the half-forgotten memory of horror in a dream.

She stood near the steamer’s stern apart from other passengers, a slender, lonely figure in her silver-fox furs, her ulster and smart little hat, watching the lights of Yuen-San grow paler and smaller along the horizon until they looked like a level row of stars.

Under her haunted eyes Asia was slowly dissolving to a streak of vapour in the misty lustre of the moon.

Suddenly the ancient continent disappeared, washed out by a wave against the sky; and with it vanished the last shreds of that accursed nightmare which had possessed her for four endless years. But whether during those unreal years her soul had only been held in bondage, or whether, as she had been taught, it had been irrevocably destroyed, she still remained uncertain, knowing nothing about the death of souls or how it was accomplished.

As she stood there, her sad eyes fixed on the misty East, a passenger passing–an Englishwoman–paused to say something kind to the young American; and added, “if there is anything my husband and I can do it would give us much pleasure.” The girl had turned her head as though not comprehending. The other woman hesitated.

“This is Doctor Norne’s daughter, is it not?” she inquired in a pleasant voice.

“What wonder, you poor child! Come to us if you feel need of companionship.”

“You are very kind…. I seem to wish to be alone, somehow.”

“I understand…. Good-night, my dear.”

Late the next morning Tressa Norne awoke, conscious for the first time in four years that it was at last her own familiar self stretched out there on the pillows where sunshine streamed through the porthole. All that day she lay in her bamboo steamer chair on deck. Sun and wind conspired to dry every tear that wet her closed lashes. Her dark, glossy hair blew about her face; scarlet tinted her full lips again; the tense hands relaxed. Peace came at sundown.

That evening she took her Yu-kin from her cabin and found a chair on the deserted hurricane deck.

And here, in the brilliant moonlight of the China Sea, she curled up cross-legged on the deck, all alone, and sounded the four futile strings of her moon-lute, and hummed to herself, in a still voice, old songs she had sung in Yian before the tragedy. She sang the tent-song called Tchinguiz. She sang Camel Bells and The Blue Bazaar,–children’s songs of the Yiort. She sang the ancient Khiounnou song called “The Saghalien”:

And songs like these–the one called “Keuke Mongol,” and an ancient air of the Tchortchas called “The Thirty Thousand Calamities,” and some Chinese boatmen’s songs which she had heard in Yian before the tragedy; these she hummed to herself there in the moonlight playing on her round-faced, short-necked lute of four strings.

Terror indeed seemed ended for her, and in her heart a great overwhelming joy was welling up which seemed to overflow across the entire moonlit world.