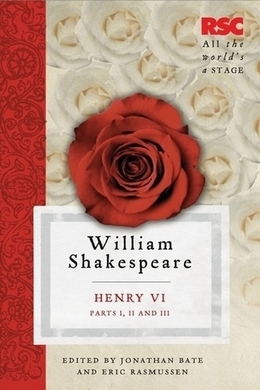 Parts I, II and III

Displaying the bold vision and growing skill of a young playwright, these are Shakespeare’s first three history plays, covering some sixty tumultuous years of English history. Their pageantry, violence, and stirring speeches excite audiences with action as well as character, and midway through the final play in this trilogy, a shocking, clever, inimitably evil new voice is heard—that of Richard of Gloucester, destined to become England’s most fearsome and hated ruler of all time, Richard III.

Dead March. Enter the Funeral of KING HENRY the Fifth, attended on by Dukes of BEDFORD, Regent of France; GLOUCESTER, Protector; and EXETER, Earl of WARWICK, the BISHOP OF WINCHESTER, Heralds, etc.

Hung be the heavens with black, yield day to night! Comets, importing change of times and states, Brandish your crystal tresses in the sky, And with them scourge the bad revolting stars That have consented unto Henry’s death! King Henry the Fifth, too famous to live long! England ne’er lost a king of so much worth.

England ne’er had a king until his time. Virtue he had, deserving to command: His brandish’d sword did blind men with his beams: His arms spread wider than a dragon’s wings; His sparking eyes, replete with wrathful fire, More dazzled and drove back his enemies Than mid-day sun fierce bent against their faces. What should I say? his deeds exceed all speech: He ne’er lift up his hand but conquered.

We mourn in black: why mourn we not in blood? Henry is dead and never shall revive: Upon a wooden coffin we attend, And death’s dishonourable victory We with our stately presence glorify, Like captives bound to a triumphant car. What! shall we curse the planets of mishap That plotted thus our glory’s overthrow? Or shall we think the subtle-witted French Conjurers and sorcerers, that afraid of him By magic verses have contrived his end? BISHOP

He was a king bless’d of the King of kings. Unto the French the dreadful judgement-day So dreadful will not be as was his sight. The battles of the Lord of hosts he fought: The church’s prayers made him so prosperous.

The church! where is it? Had not churchmen pray’d, His thread of life had not so soon decay’d: None do you like but an effeminate prince, Whom, like a school-boy, you may over-awe. BISHOP

Gloucester, whate’er we like, thou art protector And lookest to command the prince and realm. Thy wife is proud; she holdeth thee in awe, More than God or religious churchmen may.

Name not religion, for thou lovest the flesh, And ne’er throughout the year to church thou go’st Except it be to pray against thy foes.

Cease, cease these jars and rest your minds in peace: Let’s to the altar: heralds, wait on us: Instead of gold, we’ll offer up our arms: Since arms avail not now that Henry’s dead. Posterity, await for wretched years, When at their mothers’ moist eyes babes shall suck, Our isle be made a nourish of salt tears, And none but women left to wail the dead. Henry the Fifth, thy ghost I invocate: Prosper this realm, keep it from civil broils, Combat with adverse planets in the heavens! A far more glorious star thy soul will make Than Julius Caesar or bright–

My honourable lords, health to you all! Sad tidings bring I to you out of France, Of loss, of slaughter and discomfiture: Guienne, Champagne, Rheims, Orleans, Paris, Guysors, Poictiers, are all quite lost.

What say’st thou, man, before dead Henry’s corse? Speak softly, or the loss of those great towns Will make him burst his lead and rise from death.

Is Paris lost? is Rouen yielded up? If Henry were recall’d to life again, These news would cause him once more yield the ghost.

How were they lost? what treachery was used?

No treachery; but want of men and money. Amongst the soldiers this is muttered, That here you maintain several factions, And whilst a field should be dispatch’d and fought, You are disputing of your generals: One would have lingering wars with little cost; Another would fly swift, but wanteth wings; A third thinks, without expense at all, By guileful fair words peace may be obtain’d. Awake, awake, English nobility! Let not sloth dim your horrors new-begot: Cropp’d are the flower-de-luces in your arms; Of England’s coat one half is cut away.

Were our tears wanting to this funeral, These tidings would call forth their flowing tides.

Me they concern; Regent I am of France. Give me my steeled coat. I’ll fight for France. Away with these disgraceful wailing robes! Wounds will I lend the French instead of eyes, To weep their intermissive miseries.