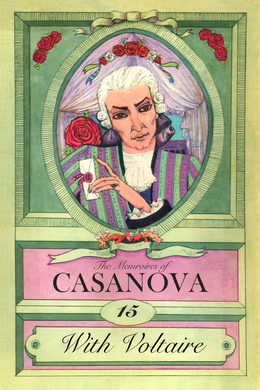 M. de Voltaire; my discussions with that Great Man. The Syndic and the three girls, and then the dispute with Voltaire. My Adventures at Aix, and my second M. M. And then here ending my adventure with the Nun from Chamberi, culminatng in my flight from Aix.

“M. de Voltaire,” said I, “this is the happiest moment of my life. I have been your pupil for twenty years, and my heart is full of joy to see my master.”

“Honour me with your attendance on my course for twenty years more, and promise me that you will bring me my fees at the end of that time.”

“Certainly, if you promise to wait for me.”

This Voltairean sally made all present laugh, as was to be expected, for those who laugh keep one party in countenance at the other’s expense, and the side which has the laughter is sure to win; this is the rule of good society.

I was not taken by surprise, and waited to have my revenge.

Just then two Englishmen came in and were presented to him.

“These gentlemen are English,” said Voltaire; “I wish I were.”

I thought the compliment false and out of place; for the gentlemen were obliged to reply out of politeness that they wished they had been French, or if they did not care to tell a lie they would be too confused to tell the truth. I believe every man of honour should put his own nation first.

A moment after, Voltaire turned to me again and said that as I was a Venetian I must know Count Algarotti.

“I know him, but not because I am a Venetian, as seven-eights of my dear countrymen are not even aware of his existence.”

“I should have said, as a man of letters.”

“I know him from having spent two months with him at Padua, seven years ago, and what particularly attracted my attention was the admiration he professed for M. de Voltaire.”

“That is flattering for me, but he has no need of admiring anyone.”

“If Algarotti had not begun by admiring others, he would never have made a name for himself. As an admirer of Newton he endeavoured to teach the ladies to discuss the theory of light.”

“Not as well as M. de Fontenelle in his ‘Plurality of Worlds;’ however, one may say he has succeeded.”

“True. If you see him at Bologna, tell him I am expecting to hear from him about Russia. He can address my letters to my banker, Bianchi, at Milan, and they will be sent on to me.”

“I have heard that the Italians do not care for his style.”

“No; all that he writes is full of French idioms. His style is wretched.”

“But do not these French turns increase the beauty of your language?”

“They make it insufferable, as French would be mixed with Italian or German even though it were written by M. de Voltaire.”

“You are right; every language should preserve its purity. Livy has been criticised on this account; his Latin is said to be tainted with patavinity.”

“When I began to learn Latin, the Abbe Lazzarini told me he preferred Livy to Sallust.”

“The Abbe Lazzarini, author of the tragedy, ‘Ulisse il giovine’? You must have been very young; I wish I had known him. But I knew the Abbe Conti well; the same that was Newton’s friend, and whose four tragedies contain the whole of Roman history.”

“I also knew and admired him. I was young, but I congratulated myself on being admitted into the society of these great men. It seems as if it were yesterday, though it is many years ago; and now in your presence my inferiority does not humiliate me. I wish to be the younger son of all humanity.”

“Better so than to be the chief and eldest. May I ask you to what branch of literature you have devoted yourself?”

“To none; but that, perhaps, will come afterwards. In the meantime I read as much as I can, and try to study character on my travels.”

“That is the way to become learned, but the book of humanity is too vast. Reading a history is the easier way.”

“Yes, if history did not lie. One is not sure of the truth of the facts. It is tiring, while the study of the world is amusing. Horace, whom I know by heart, is my guide-book.”

“Algarotti, too, is very fond of Horace. Of course you are fond of poetry?”

“Have you made many sonnets?”

“Ten or twelve I like, and two or three thousand which in all probability I have not read twice.”

“The Italians are mad after sonnets.”

“Yes; if one can call it a madness to desire to put thought into measured harmony. The sonnet is difficult because the thought has to be fitted exactly into the fourteen lines.”

“It is Procrustes’ bed, and that’s the reason you have so few good ones. As for us, we have not one; but that is the fault of our language.”

“And of the French genius, which considers that a thought when extended loses all its force.”

“Pardon me, it depends on the kind of thought. A witty saying, for example, will not make a sonnet; in French or Italian it belongs to the domain of epigram.”

“Ariosto; but I cannot say I love him better than the others, for he is my only love.”