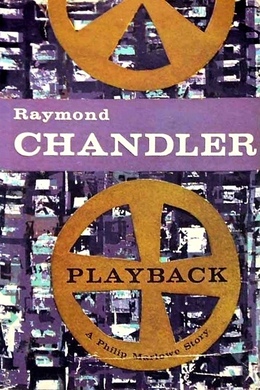 The final complete novel by Raymond Chandler, featuring his iconic creation Philip Marlowe. Betty Mayfield is blond and beautiful and has just been found guilty of murdering her husband. But when the jundge realizes the jury is terrified of her father-in-law–the man who owns everything in this small North Carolina town–he overturns the verdict. Her father-in-law swears vengeance, and Betty flees. Seeking a new life, she meets Larry Mitchell, a brash but charming gigolo, on the train to Vancouver. He brings her to the Royal Vancouver Hotel, where she checks into a room beneath the penthouse of wealthy playboy Clark Brandon, who takes her under his wing. When Mitchell’s body turns up on Betty’s balcony, jaded inspector Jeff Killaine is assigned to the case, but finds himself falling for Betty. Did she do it, or was she framed?

“Did you hear me? I said I was Clyde Umney, the lawyer.”

“Clyde Umney, the lawyer. I thought we had several of them.”

“Don’t get fresh with me, young man.”

“I want you to meet the Super Chief at eight o’clock, identify a girl among the passengers, follow her until she checks in somewhere, and then report to me. Is that clear?”

“I don’t know enough to be sure I could accept the case.”

“Don’t,” I interrupted. “I might get hysterical. Just tell me the basic facts. Perhaps another investigator would suit you better. I never was an FBI man.”

“Oh. My secretary, Miss Vermilyea, will be at your office in half an hour. She will have the necessary information for you. She is very efficient. I hope you are.”

“I’m more efficient when I’ve had breakfast. Have her come here, would you?”

I gave him the address of my place on Yucca Avenue, and told him how she would find it.

“Very well,” he said grudgingly, “but I want one thing very clear. The girl is not to know she is being followed. This is very important. I am acting for a very influential firm of Washington attorneys. Miss Vermilyea will advance you some expense money and pay you a retainer of two hundred and fifty dollars. I expect a high degree of efficiency. And let’s not waste time talking.”

He hung up. I struggled out of bed, showered, shaved and was nuzzling my third cup of coffee when the door bell rang.

“I’m Miss Vermilyea, Mr. Umney’s secretary,” she said in a rather chintzy voice.

She was quite a doll. She wore a white belted raincoat, no hat, a well-cherished head of platinum hair, booties to match the raincoat, a folding plastic umbrella, a pair of blue-gray eyes that looked at me as if I had said a dirty word. I helped her off with her raincoat. She smelled very nice. She had a pair of legs–so far as I could determine–that were not painful to look at. She wore night sheer stockings. I stared at them rather intently, especially when she crossed her legs and held out a cigarette to be lighted.

“Christian Dior,” she said, reading my rather open mind. “I never wear anything else. A light, please.”

“You’re wearing a lot more today,” I said snapping a lighter for her.

“I don’t greatly care for passes this early in the morning.”

“What time would suit you, Miss Vermilyea?”

She smiled rather acidly, inventoried her handbag and tossed me a manila envelope. “I think you’ll find everything you need in this.”

“Get on with it, you goof. I’ve heard all about you. Why do you think Mr. Umney chose you? He didn’t. I did. And stop looking at my legs.”

I opened the envelope. It contained another sealed envelope and two checks made out to me. One, for $250, was marked “Retainer, as an advance against fees for professional services.” The other was for $200 and was marked “Advance to Philip Marlowe for necessary expenses.”

“You will account for the expenses to me, in exact detail,” Miss Vermilyea said. “And buy your own drinks.”

The other envelope I didn’t open–not yet. “What makes Umney think I’ll take a case I know nothing about?”

“You’ll take it. You’re not asked to do anything wrong. You have my word for that.”

“Oh, we might discuss that over a drink some rainy evening, when I’m not too busy.”

I opened the other envelope. It contained a photograph of a girl. The pose suggested a natural ease, or a lot of experience in being photographed. It showed darkish hair which might possibly have been red, a wide clear forehead, serious eyes, high cheekbones, nervous nostrils and a mouth which was not giving anything away. It was a fine-drawn, almost a taut face, and not a happy one.

“Turn it over,” Miss Vermilyea said.

On the back there was clearly typed material.