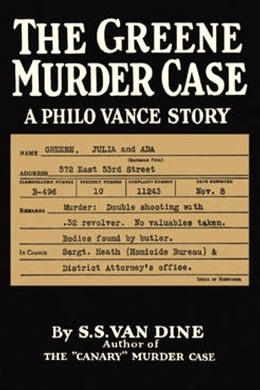 Philo Vance takes a hand when, in an evening, one daughter of the Greene family is shot to death and another one is wounded. The family comprises two sons and three daughters (the youngest, Ada, is adopted) under the rule of their mother, a bedridden invalid who spends her days feeling sorry for herself and cursing her ungrateful children. The family is required to live in the Greene mansion under the terms of their father’s will. The German cook seems strangely attached to the adopted daughter, and other hangers-on include the mother’s physician, who is courting Sibella Greene, and the enigmatic butler.

It has long been a source of wonder to me why the leading criminological writers—men like Edmund Lester Pearson, H. B. Irving, Filson Young, Canon Brookes, William Bolitho, and Harold Eaton—have not devoted more space to the Greene tragedy; for here, surely, is one of the outstanding murder mysteries of modern times—a case practically unique in the annals of latter-day crime. And yet I realize, as I read over my own voluminous notes on the case, and inspect the various documents relating to it, how little of its inner history ever came to light, and how impossible it would be for even the most imaginative chronicler to fill in the hiatuses.

The world, of course, knows the external facts. For over a month the press of two continents was filled with accounts of this appalling tragedy; and even the bare outline was sufficient to gratify the public’s craving for the abnormal and the spectacular. But the inside story of the catastrophe surpassed even the wildest flights of public fancy; and, as I now sit down to divulge those facts for the first time, I am oppressed with a feeling akin to unreality, although I was a witness to most of them and hold in my possession the incontestable records of their actuality.

Of the fiendish ingenuity which lay behind this terrible crime, of the warped psychological motives that inspired it, and of the strange hidden sources of its technic, the world is completely ignorant. Moreover, no explanation has ever been given of the analytic steps that led to its solution. Nor have the events attending the mechanism of that solution—events in themselves highly dramatic and unusual—ever been recounted. The public believes that the termination of the case was a result of the usual police methods of investigation; but this is because the public is unaware of many of the vital factors of the crime itself, and because both the Police Department and the District Attorney’s office have, as if by tacit agreement, refused to make known the entire truth—whether for fear of being disbelieved or merely because there are certain things so terrible that no man wishes to talk of them, I do not know.

The record, therefore, which I am about to set down is the first complete and unedited history of the Greene holocaust. I feel that now the truth should be known, for it is history, and one should not shrink from historical facts. Also, I believe that the credit for the solution of this case should go where it belongs.

The man who elucidated the mystery and brought to a close that palimpsest of horror was, curiously enough, in no way officially connected with the police; and in all the published accounts of the murder his name was not once mentioned. And yet, had it not been for him and his novel methods of criminal deduction, the heinous plot against the Greene family would have been conclusively successful. The police in their researches were dealing dogmatically with the evidential appearances of the crime, whereas the operations of the criminal were being conducted on a plane quite beyond the comprehension of the ordinary investigator.

This man who, after weeks of sedulous and disheartening analysis, eventually ferreted out the source of the horror, was a young social aristocrat, an intimate friend of John F.-X. Markham, the District Attorney. His name I am not at liberty to divulge, but for the purposes of these chronicles I have chosen to call him Philo Vance. He is no longer in this country, having transferred his residence several years ago to a villa outside of Florence; and, since he has no intention of returning to America, he has acceded to my request to publish the history of the criminal cases in which he participated as a sort of amicus curiæ. Markham also has retired to private life; and Sergeant Ernest Heath, that doughty and honest officer of the Homicide Bureau who officially handled the Greene case for the Police Department, has, through an unexpected legacy, been able to gratify his life’s ambition to breed fancy wyandottes on a model farm in the Mohawk Valley. Thus circumstances have made it possible for me to publish my intimate records of the Greene tragedy.

A few words are necessary to explain my own participation in the case. (I say “participation,” though, in reality, my rôle was that of passive spectator.) For several years I had been Vance’s personal attorney. I had resigned from my father’s law firm—Van Dine, Davis & Van Dine—in order to devote myself exclusively to Vance’s legal and financial needs, which, by the way, were not many. Vance and I had been friends from our undergraduate days at Harvard, and I found in my new duties as his legal agent and monetary steward a sinecure combined with many social and cultural compensations.