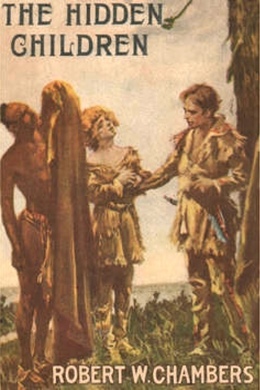 Gender roles in the American Revolutionary War period were not exactly a bastion of progressiveness. However, even during a time when most women were encouraged to shrink from conflict and follow the lead of any man in the vicinity, there were a few iconoclastic females who broke this mold. The defiantly independent heroine at the center of The Hidden Children steadfastly refuses to be held down by social conventions she sees as useless.

In the middle of the Bedford Road we three drew bridle. Boyd lounged in his reeking saddle, gazing at the tavern and at what remained of the tavern sign, which seemed to have been a new one, yet now dangled mournfully by one hinge, shot to splinters.

The freshly painted house itself, marred with buckshot, bore dignified witness to the violence done it. A few glazed windows still remained unbroken; the remainder had been filled with blue paper such as comes wrapped about a sugar cone, so that the misused house seemed to be watching us out of patched and battered eyes.

It was evident, too, that a fire had been wantonly set at the northeast angle of the house, where sill and siding were deeply charred from baseboard to eaves.

Nor had this same fire happened very long since, for under the eaves white-faced hornets were still hard at work repairing their partly scorched nest. And I silently pointed them out to Lieutenant Boyd.

“Also,” he nodded, “I can still smell the smoky wood. The damage is fresh enough. Look at your map.”

He pushed his horse straight up to the closed door, continuing to examine the dismantled sign which hung motionless, there being no wind stirring.

“This should be Hays’s Tavern,” he said, “unless they lied to us at Ossining. Can you make anything of the sign, Mr. Loskiel?”

“Nothing, sir. But we are on the highway to Poundridge, for behind us lies the North Castle Church road. All is drawn on my map as we see it here before us; and this should be the fine dwelling of that great villain Holmes, now used as a tavern by Benjamin Hays.”

“Rap on the door,” said Boyd; and our rifleman escort rode forward and drove his rifle-butt at the door, “There’s a man hiding within and peering at us behind the third window,” I whispered.

“I see him,” said Boyd coolly.

Through the heated silence around us we could hear the hornets buzzing aloft under the smoke-stained eaves. There was no other sound in the July sunshine.

The solemn tavern stared at us out of its injured eyes, and we three men of the Northland gazed back as solemnly, sobered once more to encounter the trail of the Red Beast so freshly printed here among the pleasant Westchester hills.

And to us the silent house seemed to say: “Gentlemen, gentlemen! Look at the plight I’m in–you who come from the blackened North!” And with never a word of lip our heavy thoughts responded: “We know, old house! We know! But at least you still stand; and in the ashes of our Northland not a roof or a spire remains aloft between the dwelling of Deborah Glenn and the ford at the middle fort.”

Boyd broke silence with an effort; and his voice was once more cool and careless, if a little forced:

“So it’s this way hereabouts, too,” he said with a shrug and a sign to me to dismount. Which I did stiffly; and our rifleman escort scrambled from his sweatty saddle and gathered all three bridles in his mighty, sunburnt fist.

“Either there is a man or a ghost within,” I said again, “Whatever it is has moved.”

“A man,” said Boyd, “or what the inhumanity of man has left of him.”

And it was true, for now there came to the door and opened it a thin fellow wearing horn spectacles, who stood silent and cringing before us. Slowly rubbing his workworn hands, he made us a landlord’s bow as listless and as perfunctory as ever I have seen in any ordinary. But his welcome was spoken in a whisper.

“God have mercy on this house,” said Boyd loudly. “Now, what’s amiss, friend? Is there death within these honest walls, that you move about on tiptoe?”

“There is death a-plenty in Westchester, sir,” said the man, in a voice as colorless as his drab smalls and faded hair. Yet what he said showed us that he had noted our dress, too, and knew us for strangers.

My lieutenant laughed, showing his white teeth; laid belt, hatchet, and heavy knife on a wine-stained table, and placed his rifle against it. Then, slipping cartridge sack, bullet pouch, and powder horn from his shoulders, stood eased, yawning and stretching his fine, powerful frame.

“I take it that you see few of our corps here below,” he observed indulgently.

The landlord’s lack-lustre eyes rested on me for an instant, then on Boyd:

“Do you know the uniform, landlord?”

“Yes, but whose, man? Whose?” insisted Boyd impatiently.

The other shook his head.