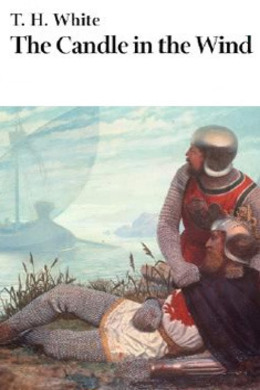 Candle in the Wind

The fourth book from the collection The Once and Future King by T. H. White. It deals with the last weeks of Arthur’s reign, his dealings with his son Mordred’s revolts, Guenever and Lancelot’s demise, and his perception of right and wrong.

The addition of years had not been kind to Agravaine. Even when he was forty he had looked his present age, which was fifty-five. He was seldom sober.

Mordred, the cold wisp of a man, did not seem to have any age. His years, like the depths of his blue eyes and the inflexions of his musical voice, were non-committal.

The two were standing in the cloisters of the Orkney palace at Camelot, looking out at the hawks who sat beneath the sun, on their blocks in the green courtyard. The cloisters had the new-fashioned flamboyant arches, in whose graceful frames the hawks stood out with noble indifference–a jerfalcon, a goshawk, a falcon and her tiercel, and four little merlins who had been kept all winter, yet had survived. The blocks were clean–for the sportsmen of those days considered that, if you went in for blood sports, it was your duty to conceal the beastliness with scrupulous care. All were lovingly ornamented with Spanish leather in scarlet, and with gold tooling. The leashes of the hawks were plaited out of white horse leather. The jer had a snow-white leash and jesses cut from guaranteed unicorn skin, as a tribute to her station in life. She had been brought all the way from Iceland, and that was the least they could do for her.

Mordred said pleasantly: “For God his sake let’s get out of this. The place stinks.”

When he spoke the hawks moved slightly, so that their bells gave a whisper of sound. The bells had been brought from the Indies, regardless of expense, and the pair worn by the jer were made of silver. An enormous eagle-owl who was sometimes used as a decoy, but who was at present standing on a perch in the shade of the cloister, opened his eyes when the bells rang. Before he had opened them, he might have been a stuffed owl, a dowdy bundle of feathers. The moment they had dawned, he was a creature from Edgar Allan Poe. You hardly liked to look at him. They were red eyes, homicidal, terrific, seeming actually to give out light. They were like rubies filled with flame. He was called the Grand Duke.

“I don’t smell anything,” said Agravaine. He sniffed suspiciously, trying to smell. But his palate was gone, both for smell and taste, and he had a headache.

“It stinks of Sport,” said Mordred in inverted commas, “and the Done Thing and the Best People. Let’s go to the garden.”

Agravaine returned tenaciously to the subject which they had been discussing.

“It is no good making a fuss about it,” he said. “We know the rights and wrongs, but nobody else knows. Nobody would listen.”

“But they must listen.” Small flecks in the iris of Mordred’s eyes burned with a turquoise light, as bright as the owl’s. Instead of being a foppish man with a crooked shoulder, dressed in extravagant clothes, he became a Cause. He became, on this matter, everything which Arthur was not–the irreconcilable opposite of the Englishman. He became the invincible Gael, the scion of desperate races more ancient than Arthur’s, and more subtle. Now, when he was on fire with his Cause, Arthur’s justice seemed bourgeois and obtuse beside him. It seemed merely to be dull complacency, beside the savagery and feral wit of the Pict. His maternal ancestors crowded into his face when he was spurning at Arthur–ancestors whose civilization, like Mordred’s, had been matriarchal: who had ridden bare-back, charged in chariots, fought by stratagem, and ornamented their grisly strongholds with the heads of enemies. They had marched, long-haired and ferocious, an ancient writer tells us, “sword in hand, against rivers in flood or against the storm-tossed ocean.” They were the race, now represented by the Irish Republican Army rather than by the Scots Nationalists, who had always murdered landlords and blamed them for being murdered–the race which could make a national hero of a man like Lynchahaun, because he bit off a woman’s nose and she a Gall–the race which had been expelled by the volcano of history into the far quarters of the globe, where, with a venomous sense of grievance and inferiority, they even nowadays proclaim their ancient megalomania. They were the Catholics who could fly directly in the face of any pope or saint–Adrian, Alexander or St. Jerome–if the saint’s policies did not suit their own convenience: the hysterically touchy, sorrowful, flayed defenders of a broken heritage. They were the race whose barbarous, cunning, valiant defiance had been enslaved, long centuries before, by the foreign people whom Arthur represented. This was one of the barriers between the father and his son.

Agravaine said: “Mordred, I want to talk. There doesn’t seem to be anywhere to sit. Sit on that thing, and I will sit here. Nobody can hear us.”

“I don’t mind if they do hear. That is what we want. It should be said out loud, not whispered in cloisters.”

“The whispers will get there in the end.”