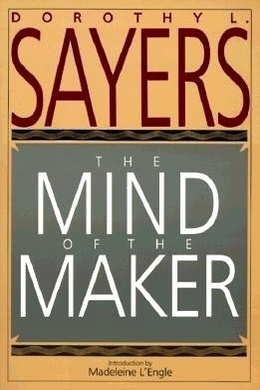 The Mind of the Maker

From the first pages of Genesis, it is clear that God and man share one vital trait: the ability to create great works out of nothing. More than any other group, artists feel impelled to create, and this urge brings them closer to God. By contemplating the creative drive of humanity, we can better understand the works of God, and by reading deeply into the tenets of Christianity, we can better understand the creative spirit of man. Dorothy L. Sayers explores the concept of the Holy Trinity within the context of invention: the creative idea, the creative energy, and the creative power. In this searching, wide-ranging treatise, one of the greatest minds of the twentieth century shows us what it means to be an artist—and what it takes to make humankind.

The word “law” is currently used in two quite distinct meanings. It may describe an arbitrary regulation made by human consent in particular circumstances for a particular purpose, and capable of being promulgated, enforced, suspended, altered or rescinded without interference with the general scheme of the universe. In this sense we may talk of Roman “Law”, the “laws” of civilised warfare, or the “laws” of cricket. Such laws frequently prescribe that certain events shall follow upon certain others; but the second event is not a necessary consequence of the first: the connection between the two is purely formal. Thus, if the ball (correctly bowled) hits the wicket, the batsman is “out”. There is, however, no inevitable connection between the impact of the ball upon three wooden stumps and the progress of a human body from a patch of mown grass to a pavilion. The two events are readily separable in theory. If the M.C.C. chose to alter the “law”, they could do so immediately, by merely saying so, and no cataclysm of nature would be involved. The l.b.w. rule has, in fact, been altered within living memory, and not merely the universe, but even the game, has survived the alteration. Similarly, if a twentieth-century Englishman marries two wives at once, he goes to prison—but only if he is found out; there is no necessary causal connection between over-indulgence in matrimony and curtailment of personal liberty (in the formal sense, that is; in another, one may say that to marry even one wife is to renounce one’s freedom); in Mohammedan countries any number of wives up to four is, or was, held to be both lawful and morally right. And in warfare, the restrictions forbidding the use of poison-gas and the indiscriminate sowing of mines must unfortunately be regarded rather as pious aspirations than as “laws” entailing consequences even of a conventional kind.

In its other use, the word “law” is used to designate a generalised statement of observed fact of one sort or another. Most of the so-called “laws of nature” are of this kind: “If you hold your finger in the fire it will be burnt”; “if you vary the distance between an object and a source of light, the intensity of the light at the surface of the object will vary inversely as the square of the distance.” Such “laws” as these cannot be promulgated, altered, suspended or broken at will; they are not “laws” at all, in the sense that the laws of cricket or the laws of the realm are “laws”; they are statements of observed facts inherent in the nature of the universe. Anybody can enact that murder shall not be punishable by death; nobody can enact that the swallowing of a tumblerful of prussic acid shall not be punishable by death. In the former case, the connection between the two events is legal—that is, arbitrary; in the latter, it is a true causal connection, and the second event is a necessary consequence of the first.

The word “law” is also applied to statements of observed fact of a rather different kind. It is used, for example, as a handy expression to sum up a general tendency, in cases where a given effect usually, though not necessarily, follows a given cause. Thus the Mendelian “law” of inheritance expresses the observed fact that the mating of, for example, black with white will—taking it by and large—produce black, white and mulatto offspring in a certain numerical proportion, though not necessarily with arithmetical exactitude in any one case. The same word is also used to express a tendency which has been observed to occur, as a historic fact, over specified periods. For instance, the philologist Jakob Grimm observed that certain phonetic changes took place in particular consonants during the development of the Teutonic languages from the primitive roots which they share with Greek and Sanskrit, and the summary of his observations is known as “Grimm’s Law”. “Thus Grimm’s Law may be defined as the statement of certain phonetic facts which happen invariably unless they are interfered with by other facts.” A “law” of this kind is, therefore, very like a “law of nature”—an apple, we may say, when it leaves the tree, will invariably fall to the ground unless there is some interference with the law—unless, for example, the hand of Isaac Newton arrests it in mid-fall. There is, however, this difference: that we can readily conceive of a universe in which Grimm’s Law did not function; the world would remain substantially the same world if Sanskrit t, instead of being represented by d in Old High German, had been represented by something different; whereas a world in which apples did not fall would be very unlike the world in which we live.