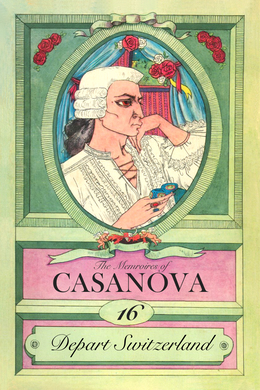 The work revolves around the many travel expeditions undertaken by Casanova. Here he critically analyzes the attitudes and life-styles of the elite of France. With great insights and thoughtful reflections, this is a work that grasps attention.

The idea of the sorry plight in which I had left the Marquis de Prie, his mistress, and perhaps all the company, who had undoubtedly coveted the contents of my cash-box, amused me till I reached Chamberi, where I only stopped to change horses. When I reached Grenoble, where I intended to stay a week, I did not find my lodging to my liking, and went in my carriage to the post-office, where I found several letters, amongst others, one from Madame d’Urfe, enclosing a letter of introduction to an officer named Valenglard, who, she told me, was a learned man, and would present me at all the best houses in the town.

I called on this officer and received a cordial welcome. After reading Madame d’Urfe’s letter he said he was ready to be useful to me in anything I pleased.

He was an amiable, middle aged man, and fifteen years before had been Madame d’Urfe’s friend, and in a much more intimate degree the friend of her daughter, the Princess de Toudeville. I told him that I was uncomfortable at the inn, and that the first service I would ask of him would be to procure me a comfortable lodging. He rubbed his head, and said,–

“I think I can get you rooms in a beautiful house, but it is outside the town walls. The door-keeper is an excellent cook, and for the sake of doing your cooking I am sure he will lodge you for nothing.”

“Don’t be afraid,” said the baron, “he will make it up by means of his dishes; and besides, the house is for sale and costs him nothing. Come and see it.”

I took a suite of three rooms and ordered supper for two, warning the man that I was dainty, liked good things, and did not care for the cost. I also begged M. de Valenglard to sup with me. The doorkeeper said that if I was not pleased with his cooking I had only to say so, and in that case I should have nothing to pay. I sent for my carriage, and felt that I had established myself in my new abode. On the ground floor I saw three charming girls and the door-keeper’s wife, who all bowed profoundly. M. de Valenglard took me to a concert with the idea of introducing me to everybody, but I begged him not to do so, as I wished to see the ladies before deciding which of them I should like to know.

The company was a numerous one, especially where women were concerned, but the only one to attract my attention was a pretty and modest-looking brunette, whose fine figure was dressed with great simplicity. Her charming eyes, after having thrown one glance in my direction, obstinately refused to look at me again. My vanity made me conclude at once that she behaved thus only to increase my desire of knowing her, and to give me plenty of time to examine her side-face and her figure, the proportions of which were not concealed by her simple attire. Success begets assurance, and the wish is father to the thought. I cast a hungry gaze on this young lady without more ado, just as if all the women in Europe were only a seraglio kept for my pleasures. I told the baron I should like to know her.

“Those are three reasons which make me the more anxious to know her.”

“You will really find nothing to do in that quarter.”

“There is her aunt, I will introduce you to her as we leave the concert- room.”

After doing me this service, he came to sup with me. The door-keeper and cook struck me as being very like Lebel. He made his two pretty daughters wait on me, and I saw that Valenglard was delighted at having lodged me to my satisfaction, but he grumbled when he saw fifteen dishes.

“On the contrary, he has guessed my tastes. Don’t you think everything was very good?”

“Don’t be afraid; I love spending my money.”

“I beg your pardon, I only want you to be pleased.”

We had exquisite wines, and at dessert some ratafia superior to the Turkish ‘visnat’ I had tasted seventeen years before at Yussuf Ali’s. When my landlord came up at the end of supper, I told him that he ought to be Louis XV.’s head cook.

“Go on as you have begun, and do better if you can; but let me have your bill every morning.”

“You are quite right; with such an arrangement one can tell how one is getting on.”

“I should like you always to give me ices, and you must let me have two more lights. But, unless I am mistaken, those are candles that I see. I am a Venetian, and accustomed to wax lights.”

“That is your servant’s fault, sir.”

“Because, after eating a good supper, he went to bed, saying he was ill. Thus I heard nothing as to how you liked things done.”

“Very good, you shall learn from my own lips.”

“He asked my wife to make chocolate for you tomorrow morning; he gave her the chocolate, I will make it myself.”