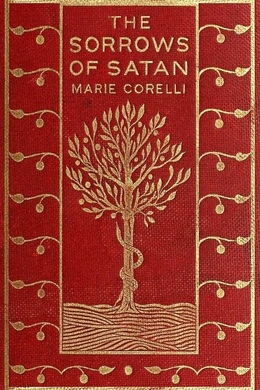 The Sorrows of Satan

The Strange Experience of One Geoffrey Tempest - Millionaire

A Faustian novel and bestseller of its time, focused on Geoffrey, a starving author. The post delivers three letters, the first from a friend who offers to help with an introduction. The second advises him he has inherited money. The third has been written by Lucio, an aristocrat purporting to know the best way to invest his newfound wealth. It soon becomes apparent that Lucio is the Devil.

Do you know what it is to be poor? Not poor with the arrogant poverty complained of by certain people who have five or six thousand a year to live upon, and who yet swear they can hardly manage to make both ends meet, but really poor,–downright, cruelly, hideously poor, with a poverty that is graceless, sordid and miserable? Poverty that compels you to dress in your one suit of clothes till it is worn threadbare,–that denies you clean linen on account of the ruinous charges of washerwomen,–that robs you of your own self-respect, and causes you to slink along the streets vaguely abashed, instead of walking erect among your fellow-men in independent ease,–this is the sort of poverty I mean. This is the grinding curse that keeps down noble aspiration under a load of ignoble care; this is the moral cancer that eats into the heart of an otherwise well-intentioned human creature and makes him envious and malignant, and inclined to the use of dynamite. When he sees the fat idle woman of society passing by in her luxurious carriage, lolling back lazily, her face mottled with the purple and red signs of superfluous eating,–when he observes the brainless and sensual man of fashion smoking and dawdling away the hours in the Park, as if all the world and its millions of honest hard workers were created solely for the casual diversion of the so-called ‘upper’ classes,–then the good blood in him turns to gall, and his suffering spirit rises in fierce rebellion, crying out–“Why in God’s name, should this injustice be? Why should a worthless lounger have his pockets full of gold by mere chance and heritage, while I, toiling wearily from morn till midnight, can scarce afford myself a satisfying meal?”

Why indeed! Why should the wicked flourish like a green bay-tree? I have often thought about it. Now however I believe I could help to solve the problem out of my own personal experience. But … such an experience! Who will credit it? Who will believe that anything so strange and terrific ever chanced to the lot of a mortal man? No one. Yet it is true;–truer than much so-called truth. Moreover I know that many men are living through many such incidents as have occurred to me, under precisely the same influence, conscious perhaps at times, that they are in the tangles of sin, but too weak of will to break the net in which they have become voluntarily imprisoned. Will they be taught, I wonder, the lesson I have learned? In the same bitter school, under the same formidable taskmaster? Will they realize as I have been forced to do,–aye, to the very fibres of my intellectual perception,–the vast, individual, active Mind, which behind all matter, works unceasingly, though silently, a very eternal and positive God? If so, then dark problems will become clear to them, and what seems injustice in the world will prove pure equity! But I do not write with any hope of either persuading or enlightening my fellow-men. I know their obstinacy too well;–I can gauge it by my own. My proud belief in myself was, at one time, not to be outdone by any human unit on the face of the globe. And I am aware that others are in similar case. I merely intend to relate the various incidents of my career in due order exactly as they happened,–leaving to more confident heads the business of propounding and answering the riddles of human existence as best they may.