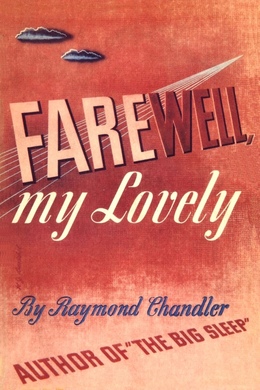 This is one of Chandler’s most famous crime novels featuring the detective Philip Marlowe, who’s about to give up on a completely routine case when he finds himself in the wrong place at the right time to get caught up in a murder that leads to a ring of jewel thieves, another murder, a fortune-teller, a couple more murders, and more corruption than your average graveyard.

It was one of the mixed blocks over on Central Avenue, the blocks that are not yet all Negro. I had just come out of a three-chair barber shop where an agency thought a relief barber named Dimitrios Aleidis might be working. It was a small matter. His wife said she was willing to spend a little money to have him come home.

I never found him, but Mrs. Aleidis never paid me any money either.

It was a warm day, almost the end of March, and I stood outside the barber shop looking up at the jutting neon sign of a second floor dine and dice emporium called Florian’s. A man was looking up at the sign too. He was looking up at the dusty windows with a sort of ecstatic fixity of expression, like a hunky immigrant catching his first sight of the Statue of Liberty. He was a big man but not more than six feet five inches tall and not wider than a beer truck. He was about ten feet away from me. His arms hung loose at his sides and a forgotten cigar smoked behind his enormous fingers.

Slim quiet Negroes passed up and down the street and stared at him with darting side glances. He was worth looking at. He wore a shaggy borsalino hat, a rough gray sports coat with white golf balls on it for buttons, a brown shirt, a yellow tie, pleated gray flannel slacks and alligator shoes with white explosions on the toes. From his outer breast pocket cascaded a show handkerchief of the same brilliant yellow as his tie. There were a couple of colored feathers tucked into the band of his hat, but he didn’t really need them. Even on Central Avenue, not the quietest dressed street in the world, he looked about as inconspicuous as a tarantula on a slice of angel food.

His skin was pale and he needed a shave. He would always need a shave. He had curly black hair and heavy eyebrows that almost met over his thick nose. His ears were small and neat for a man of that size and his eyes had a shine close to tears that gray eyes often seem to have. He stood like a statue, and after a long time he smiled.

He moved slowly across the sidewalk to the double swinging doors which shut off the stairs to the second floor. He pushed them open, cast a cool expressionless glance up and down the street, and moved inside. If he had been a smaller man and more quietly dressed, I might have thought he was going to pull a stick-up. But not in those clothes, and not with that hat, and that frame.

The doors swung back outwards and almost settled to a stop. Before they had entirely stopped moving they opened again, violently, outwards. Something sailed across the sidewalk and landed in the gutter between two parked cars. It landed on its hands and knees and made a high keening noise like a cornered rat. It got up slowly, retrieved a hat and stepped back onto the sidewalk. It was a thin, narrow-shouldered brown youth in a lilac colored suit and a carnation. It had slick black hair. It kept its mouth open and whined for a moment. People stared at it vaguely. Then it settled its hat jauntily, sidled over to the wall and walked silently splay-footed off along the block.

Silence. Traffic resumed. I walked along to the double doors and stood in front of them. They were motionless now. It wasn’t any of my business. So I pushed them open and looked in.

A hand I could have sat in came out of the dimness and took hold of my shoulder and squashed it to a pulp. Then the hand moved me through the doors and casually lifted me up a step. The large face looked at me. A deep soft voice said to me, quietly:

It was dark in there. It was quiet. From up above came vague sounds of humanity, but we were alone on the stairs. The big man stared at me solemnly and went on wrecking my shoulder with his hand.

He let go of my shoulder. The bone didn’t seem to be broken, but the arm was numb.

“It’s that kind of a place,” I said, rubbing my shoulder. “What did you expect?”

He reached for my shoulder again. I tried to dodge him but he was as fast as a cat. He began to chew my muscles up some more with his iron fingers.

“Yeah,” he said. “Little Velma. I ain’t seen her in eight years. You say this here is a dinge joint?”

I croaked that it was.

He lifted me up two more steps. I wrenched myself loose and tried for a little elbow room. I wasn’t wearing a gun. Looking for Dimitrios Aleidis hadn’t seemed to require it. I doubted if it would do me any good. The big man would probably take it away from me and eat it.

“Go on up and see for yourself,” I said, trying to keep the agony out of my voice.

He let go of me again. He looked at me with a sort of sadness in his gray eyes. “I’m feelin’ good,” he said. “I wouldn’t want anybody to fuss with me. Let’s you and me go on up and maybe nibble a couple.”