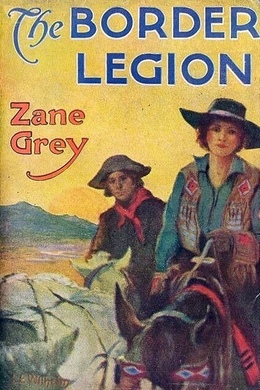 Jim Cleve has been deemed, “a good guy” all of his life and it agitates him to no end. Even his girlfriend, Joan Randle has scorned him for this “weakness” shouting, “You haven’t it in you even to be BAD!” Dejected and hurt, Jim abandons the life he has known for the gold mining camps along Alder Gulch in southern Montana. It is here, among the thieves and murderers, that he must make a new name for himself.

Joan Randle reined in her horse on the crest of the cedar ridge, and with remorse and dread beginning to knock at her heart she gazed before her at the wild and looming mountain range.

“Jim wasn’t fooling me,” she said. “He meant it. He’s going straight for the border…Oh, why did I taunt him!”

It was indeed a wild place, that southern border of Idaho, and that year was to see the ushering in of the wildest time probably ever known in the West. The rush for gold had peopled California with a horde of lawless men of every kind and class. And the vigilantes and then the rich strikes in Idaho had caused a reflux of that dark tide of humanity. Strange tales of blood and gold drifted into the camps, and prospectors and hunters met with many unknown men.

Joan had quarreled with Jim Cleve, and she was bitterly regretting it. Joan was twenty years old, tall, strong, dark. She had been born in Missouri, where her father had been well-to-do and prominent, until, like many another man of his day, he had impeded the passage of a bullet. Then Joan had become the protegee of an uncle who had responded to the call of gold; and the latter part of her life had been spent in the wilds.

She had followed Jim’s trail for miles out toward the range. And now she dismounted to see if his tracks were as fresh as she had believed. He had left the little village camp about sunrise. Someone had seen him riding away and had told Joan. Then he had tarried on the way, for it was now midday. Joan pondered. She had become used to his idle threats and disgusted with his vacillations. That had been the trouble–Jim was amiable, lovable, but since meeting Joan he had not exhibited any strength of character. Joan stood beside her horse and looked away toward the dark mountains. She was daring, resourceful, used to horses and trails and taking care of herself; and she did not need anyone to tell her that she had gone far enough. It had been her hope to come up with Jim. Always he had been repentant. But this time was different. She recalled his lean, pale face–so pale that freckles she did not know he had showed through–and his eyes, usually so soft and mild, had glinted like steel. Yes, it had been a bitter, reckless face. What had she said to him? She tried to recall it.

The night before at twilight Joan had waited for him. She had given him precedence over the few other young men of the village, a fact she resentfully believed he did not appreciate. Jim was unsatisfactory in every way except in the way he cared for her. And that also–for he cared too much.

When Joan thought how Jim loved her, all the details of that night became vivid. She sat alone under the spruce-trees near the cabin. The shadows thickened, and then lightened under a rising moon. She heard the low hum of insects, a distant laugh of some woman of the village, and the murmur of the brook. Jim was later than usual. Very likely, as her uncle had hinted, Jim had tarried at the saloon that had lately disrupted the peace of the village. The village was growing, and Joan did not like the change. There were too many strangers, rough, loud-voiced, drinking men. Once it had been a pleasure to go to the village store; now it was an ordeal. Somehow Jim had seemed to be unfavorably influenced by these new conditions. Still, he had never amounted to much. Her resentment, or some feeling she had, was reaching a climax. She got up from her seat. She would not wait any longer for him, and when she did see him it would be to tell him a few blunt facts.

Just then there was a slight rustle behind her. Before she could turn someone seized her in powerful arms. She was bent backward in a bearish embrace, so that she could neither struggle nor cry out. A dark face loomed over hers–came closer. Swift kisses closed her eyes, burned her cheeks, and ended passionately on her lips. They had some strange power over her. Then she was released.

Joan staggered back, frightened, outraged. She was so dazed she did not recognize the man, if indeed she knew him. But a laugh betrayed him. It was Jim.

“You thought I had no nerve,” he said. “What do you think of that?”

Suddenly Joan was blindly furious. She could have killed him. She had never given him any right, never made him any promise, never let him believe she cared. And he had dared–! The hot blood boiled in her cheeks. She was furious with him, but intolerably so with herself, because somehow those kisses she had resented gave her unknown pain and shame. They had sent a shock through all her being. She thought she hated him.

“Reckon I never had a beginning with you,” he replied, bitterly. “It was worth a good deal…I’m not sorry…By Heaven–I’ve–kissed you!”

He breathed heavily. She could see how pale he had grown in the shadowy moonlight. She sensed a difference in him–a cool, reckless defiance.