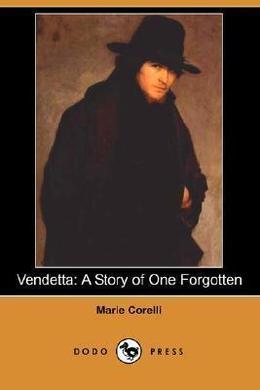 A Story of One Forgotten

Imagine friends and family believed you were dead from the Cholera- Imagine being buried alive and awakening in your coffin - Now, imagine a frantic escape from the rotting crypt only to discover something worse waiting in store…. Thus begins Marie Corelli’s suspense-thriller, Vendetta. Awakening to find he has been prematurely buried, Fabio narrowly escapes from his decrepit family mausoleum in order to seek revenge upon those who have wronged him. Disfigured from the Cholera, Fabio assumes a new identity and name, and re-introduces himself to his family who are unaware of his true character. The plan he sets in motion is gruesomely terrifying - and deliciously perverse. More than a novel of revenge, Vendetta is a finely tuned character study of madness, obsession, decadence, and a celebration of Gothic settings unrivaled by even Edgar Allan Poe. Impossible to put down, it is easy to see why Marie Corelli was called the Queen of Victorian best-sellers, for Vendetta remains as spellbinding today as it was over a century ago.

I, who write this, am a dead man. Dead legally–dead by absolute proofs–dead and buried! Ask for me in my native city and they will tell you I was one of the victims of the cholera that ravaged Naples in 1884, and that my mortal remains lie moldering in the funeral vault of my ancestors. Yet–I live! I feel the warm blood coursing through my veins–the blood of thirty summers–the prime of early manhood invigorates me, and makes these eyes of mine keen and bright–these muscles strong as iron–this hand powerful of grip–this well-knit form erect and proud of bearing. Yes!–I am alive, though declared to be dead; alive in the fullness of manly force–and even sorrow has left few distinguishing marks upon me, save one. My hair, once ebony-black, is white as a wreath of Alpine snow, though its clustering curls are thick as ever.

“A constitutional inheritance?” asks one physician, observing my frosted locks.

“A sudden shock?” suggests another.

I answer none of them. I did so once. I told my story to a man I met by chance–one renowned for medical skill and kindliness. He heard me to the end in evident incredulity and alarm, and hinted at the possibility of madness. Since then I have never spoken.

But now I write. I am far from all persecution–I can set down the truth fearlessly. I can dip the pen in my own blood if I choose, and none shall gainsay me! For the green silence of a vast South American forest encompasses me–the grand and stately silence of a virginal nature, almost unbroken by the ruthless step of man’s civilization–a haven of perfect calm, delicately disturbed by the fluttering wings and soft voices of birds, and the gentle or stormy murmur of the freeborn winds of heaven. Within this charmed circle of rest I dwell–here I lift up my overburdened heart like a brimming chalice, and empty it on the ground, to the last drop of gall contained therein. The world shall know my history.

Dead, and yet living! How can that be?–you ask. Ah, my friends! If you seek to be rid of your dead relations for a certainty, you should have their bodies cremated. Otherwise there is no knowing what may happen! Cremation is the best way–the only way. It is clean, and SAFE. Why should there be any prejudice against it? Surely it is better to give the remains of what we loved (or pretended to love) to cleansing fire and pure air than to lay them in a cold vault of stone, or down, down in the wet and clinging earth. For loathly things are hidden deep in the mold–things, foul and all unnameable–long worms–slimy creatures with blind eyes and useless wings–abortions and deformities of the insect tribe born of poisonous vapor–creatures the very sight of which would drive you, oh, delicate woman, into a fit of hysteria, and would provoke even you, oh, strong man, to a shudder of repulsion! But there is a worse thing than these merely physical horrors which come of so-called Christian burial–that is, the terrible UNCERTAINTY. What, if after we have lowered the narrow strong box containing our dear deceased relation into its vault or hollow in the ground–what, if after we have worn a seemly garb of woe, and tortured our faces into the fitting expression of gentle and patient melancholy–what, I say, if after all the reasonable precautions taken to insure safety, they should actually prove insufficient? What–if the prison to which we have consigned the deeply regretted one should not have such close doors as we fondly imagined? What, if the stout coffin should be wrenched apart by fierce and frenzied fingers–what, if our late dear friend should NOT be dead, but should, like Lazarus of old, come forth to challenge our affection anew? Should we not grieve sorely that we had failed to avail ourselves of the secure and classical method of cremation? Especially if we had benefited by worldly goods or money left to us by the so deservedly lamented! For we are self-deceiving hypocrites–few of us are really sorry for the dead–few of us remember them with any real tenderness or affection. And yet God knows! they may need more pity than we dream of!

But let me to my task. I, Fabio Romani, lately deceased, am about to chronicle the events of one short year–a year in which was compressed the agony of a long and tortured life-time! One little year!–one sharp thrust from the dagger of Time! It pierced my heart–the wound still gapes and bleeds, and every drop of blood is tainted as it falls!