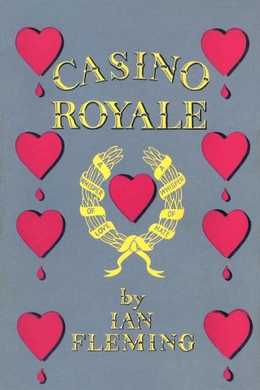 In the first of Fleming’s James Bond novels, 007 declares war on Le Chiffre, French communist and paymaster of the Soviet murder organization SMERSH. The battle begins with a fifty-million-franc game of baccarat, gains momentum during Bond’s fiery love affair with a sensuous lady spy, and reaches a chilling climax with fiendish torture at the hands of a master sadist. For incredible suspense, unexpected thrills, and extraordinary danger, nothing can beat James Bond in his inaugural adventure.

The scent and smoke and sweat of a casino are nauseating at three in the morning. Then the soul-erosion produced by high gambling–a compost of greed and fear and nervous tension–becomes unbearable and the senses awake and revolt from it.

James Bond suddenly knew that he was tired. He always knew when his body or his mind had had enough and he always acted on the knowledge. This helped him to avoid staleness and the sensual bluntness that breeds mistakes.

He shifted himself unobtrusively away from the roulette he had been playing and went to stand for a moment at the brass rail which surrounded breast-high the top table in the salle privée.

Le Chiffre was still playing and still, apparently, winning. There was an untidy pile of flecked hundred-mille plaques in front of him. In the shadow of his thick left arm there nestled a discreet stack of the big yellow ones worth half a million francs each.

Bond watched the curious, impressive profile for a time, and then he shrugged his shoulders to lighten his thoughts and moved away.

The barrier surrounding the caisse comes as high as your chin and the caissier, who is generally nothing more than a minor bank clerk, sits on a stool and dips into his piles of notes and plaques. These are ranged on shelves. They are on a level, behind the protecting barrier, with your groin. The caissier has a cosh and a gun to protect him, and to heave over the barrier and steal some notes and then vault back and get out of the casino through the passages and doors would be impossible. And the caissiers generally work in pairs.

Bond reflected on the problem as he collected the sheaf of hundred thousand and then the sheaves of ten thousand franc notes. With another part of his mind, he had a vision of tomorrow’s regular morning meeting of the casino committee.

‘Monsieur Le Chiffre made two million. He played his usual game. Miss Fairchild made a million in an hour and then left. She executed three “bancos” of Monsieur Le Chiffre within an hour and then left. She played with coolness. Monsieur le Vicomte de Villorin made one million two at roulette. He was playing the maximum on the first and last dozens. He was lucky. Then the Englishman, Mister Bond, increased his winnings to exactly three million over the two days. He was playing a progressive system on red at table five. Duclos, the chef de partie, has the details. It seems that he is persevering and plays in maximums. He has luck. His nerves seem good. On the soirée, the chemin-de-fer won x, the baccarat won y and the roulette won z. The boule, which was again badly frequented, still makes its expenses.’

Or something like that, thought Bond as he pushed his way through the swing doors of the salle privée and nodded to the bored man in evening clothes whose job it is to bar your entry and your exit with the electric foot-switch which can lock the doors at any hint of trouble.

And the casino committee would balance its books and break up to its homes or cafés for lunch.

As for robbing the caisse, in which Bond himself was not personally concerned, but only interested, he reflected that it would take ten good men, that they would certainly have to kill one or two employees, and that anyway you probably couldn’t find ten non-squeal killers in France, or in any other country for the matter of that.

As he gave a thousand francs to the vestiaire and walked down the steps of the casino, Bond made up his mind that Le Chiffre would in no circumstances try to rob the caisse and he put the contingency out of his mind. Instead he explored his present physical sensations. He felt the dry, uncomfortable gravel under his evening shoes, the bad, harsh taste in his mouth and the slight sweat under his arms. He could feel his eyes filling their sockets. The front of his face, his nose and antrum, were congested. He breathed the sweet night air deeply and focused his senses and his wits. He wanted to know if anyone had searched his room since he had left it before dinner.

He walked across the broad boulevard and through the gardens to the Hôtel Splendide. He smiled at the concierge who gave him his key–No 45 on the first floor–and took the cable.

It was from Jamaica and read:

This meant that ten million francs was on the way to him. It was the reply to a request Bond had sent that afternoon through Paris to his headquarters in London asking for more funds. Paris had spoken to London where Clements, the head of Bond’s department, had spoken to M, who had smiled wryly and told ‘The Broker’ to fix it with the Treasury.