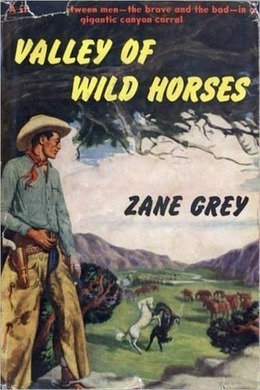 The tall, young Texan had gambled, fought, and killed in every town from Montana to Mexico. He’d been in plenty of places where there was no law, but this little hellhole was the worst. Jard Hardman and his son Dick were the law. They owned the marshal and used him to rob the town blind. These were the men Panhandle Smith had come to find-and destroy. Pan had bluffed them once, but the young gunfighter knew that this time they would call him!

The Panhandle was a lonely purple range land, unfenced and wind swept. Bill Smith, cattleman, threw up a cabin and looked at the future with hopeful eyes. One day while plowing almost out of sight of his little home–which that morning he had left apprehensively owing to an impending event–he espied his wife Margaret coming along the edge of the plowed field. She had brought his lunch this day, despite his order to the contrary. Bill dropped the loop of his driving reins over the plow handle and strode toward her. Presently she halted wearily and sat down where the dark rich overturned earth met the line of bleached grass. Bill meant to scold Margaret for bringing his lunch, but it developed she had brought him something more. A son!

This boy was born on the fragrant fresh soil, out on the open prairie, under the steely sun and the cool wind from off the Llano Estacado. He came into the world protesting against this primitive manner of his birth. Bill often related that the youngster arrived squalling and showed that his lung capacity fitted his unusual size. Despite the mother’s protestations, Bill insisted on calling the lad Panhandle.

Panhandle’s first memory was of climbing into the big cupboard in the cabin, falling out upon his head and getting blood all over his white dress. His next adventurous experience was that of chewing tobacco he found in his father’s coat. This made him very sick. His mother thought he was poisoned, and as Bill was away, she ran to the nearest neighbors for help. By the time she returned with the experienced neighbor woman Panhandle had gotten rid of the tobacco and was bent upon further conquest.

Another day Panhandle manifested a growing tendency toward self-assertion. He ran away from home. Owing to his short legs and scant breath he did not get very far down over the slope. His will and intention were tremendous. Did the dim desert call to the child? His parents had often seen him stand gazing into the purple distance. But Panhandle on this runaway occasion fell asleep on the dry grassy bottom of an irrigation ditch. Bye and bye he was missed, and father and mother, and the farm hands ran hither and thither in wild search for him. No one, however, found him. In the haste of the search some one left his work at the irrigation dam, and the water running down rudely awoke the child out of his dreams. Wet and bedraggled, squalling at the top of his lungs, Panhandle trudged back home to the relief of a distracted mother.

“Doggone it,” ejaculated Bill to his neighbors. “That kid’s goin’ to be just like me. I never could stay home.”

A year later Bill Smith sold his farm and moved farther west in Texas, where he took up a homestead, and divided his time between that and work on a big irrigating canal which was being constructed.

Panhandle now lived on a ranch and it was far lonelier than his first home, because his father was away so much of the time. At first the nearest neighbor was Panhandle’s uncle, who lived two long prairie miles away. His house was a black dot on the horizon, not unattainable, it seemed to Panhandle, but very far away. He would have risked the distance, save for his mother, who was very timid in this country so new to her. Panhandle would never forget how she was frightened at a crazy wanderer who happened to come along, and another time by some drunken Mexican laborers.

Panhandle undoubtedly had an adventuring soul. One day he discovered that a skunk had dug a hole under the front porch and had given birth to her kittens there. Panhandle was not afraid of them, and neither hurt nor frightened them. After a time he made playmates of them, and was one day hugely enjoying himself with them when his mother found him. She was frightened, enraged and horrified all at once. She entreated Panhandle to let the dirty little skunks alone. Panhandle would promise and then forget. His mother punished him, all to no avail. Then she adopted harsher measures.

Homesteaders had located near by and Mrs. Smith called on them, in the hope that she could hire a cowboy or ranch hand to come over and destroy the skunks. It chanced there was no one but a Mrs. Hardman and her only boy. His name was Dick. He was seven years old, large for his age, a bold handsome lad with red hair. Mrs. Smith made a bargain with Dick, and led him back with her.

Here Panhandle took violent exception to having his pets killed or routed out by this boy he had never before seen. He did not like his looks anyway. But Dick paid little heed to Panhandle, except once when Mrs. Smith went into the house, and then he knocked Panhandle down. For once Panhandle did not squall. He got up, round eyed, pale, with his hands clenched. He never said a word. Something was born in the depths of his gentle soul then.