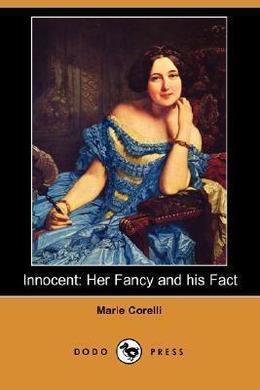 Her Fancy and His Fact

Raised on the prosperous farm of Hugo Jocelyn, descendant of a French knight, Innocent has always believed herself to be Jocelyn’s illegitimate daughter by his fiancee before her death. She is an idealistic woman, inspired by the romanticism of the medieval French literature preserved by her ancestor; indeed, she feels she knows ‘Sieur Amadis’ personally. (source: Wikipedia)

The old by-road went rambling down into a dell of deep green shadow. It was a reprobate of a road,–a vagrant of the land,–having long ago wandered out of straight and even courses and taken to meandering aimlessly into many ruts and furrows under arching trees, which in wet weather poured their weight of dripping rain upon it and made it little more than a mud pool. Between straggling bushes of elder and hazel, blackberry and thorn, it made its solitary shambling way, so sunken into itself with long disuse that neither to the right nor to the left of it could anything be seen of the surrounding country. Hidden behind the intervening foliage on either hand were rich pastures and ploughed fields, but with these the old road had nothing in common. There were many things better suited to its nature, such as the melodious notes of the birds which made their homes year after year amid its bordering thickets, or the gathering together in springtime of thousands of primroses, whose pale, small, elfin faces peeped out from every mossy corner,–or the scent of secret violets in the grass, filling the air with the delicate sweetness of a breathing made warm by the April sun. Or when the thrill of summer drew the wild roses running quickly from the earth skyward, twining their stems together in fantastic arches and tufts of deep pink and flush-white blossom, and the briony wreaths with their small bright green stars swung pendent from over-shadowing boughs like garlands for a sylvan festival. Or the thousands of tiny unassuming herbs which grew up with the growing speargrass, bringing with them pungent odours from the soil as from some deep-laid storehouse of precious spices. These choice delights were the old by-road’s peculiar possession, and through a wild maze of beauty and fragrance it strayed on with a careless awkwardness, getting more and more involved in tangles of green,–till at last, recoiling abruptly as it were upon its own steps, it stopped short at the entrance to a cleared space in front of a farmyard. With this the old by-road had evidently no sort of business whatever, and ended altogether, as it were, with a rough shock of surprise at finding itself in such open quarters. No arching trees or twining brambles were here,–it was a wide, clean brick-paved place chiefly possessed by a goodly company of promising fowls, and a huge cart-horse. The horse was tied to his manger in an open shed, and munched and munched with all the steadiness and goodwill of the sailor’s wife who offended Macbeth’s first witch. Beyond the farmyard was the farmhouse itself,–a long, low, timbered building with a broad tiled roof supported by huge oaken rafters and crowned with many gables,–a building proudly declaring itself as of the days of Elizabeth’s yeomen, and bearing about it the honourable marks of age and long stress of weather. No such farmhouses are built nowadays, for life has become with us less than a temporary thing,–a coin to be spent rapidly as soon as gained, too valueless for any interest upon it to be sought or desired. In olden times it was apparently not considered such cheap currency. Men built their homes to last not only for their own lifetime, but for the lifetime of their children and their children’s children; and the idea that their children’s children might possibly fail to appreciate the strenuousness and worth of their labours never entered their simple brains.