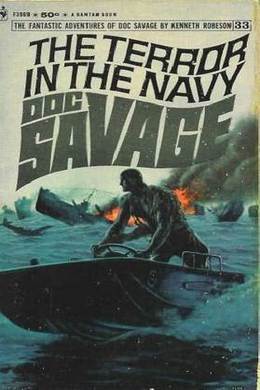 The Terror in the Navy

A bizarre dictator unleashes a deadly force against the United States Navy: the mightiest vessels in the U.S. armada are sunk; warplanes are pulled from the clouds; even Doc Savage’s impenetrable sky fortress is ripped from the stratosphere! And the brash, strutting BRAUN demands one hundred million dollars in ransom from a nation in chaos. Only the Man of Bronze dares challenge the crushing power of this phantom force!

The two seamen met in the darkness near the stern of the navy destroyer, under an awning. They were cautious. They stood for a long time listening, and at last they were satisfied that no one was near enough to overhear.

One growled, “The chief’s orders are for none of us to be seen talkin’ together!”

The other hissed, “I know it! But something’s gone wrong!”

“What? We’ve covered every angle.”

“That nosey Lieutenant Bowen Toy! He’s haunting me. He’s shadowing me. If he keeps it up, he may learn too much. He’s got to be killed!”

There was no light and no sound to show that four other naval destroyers were steaming full speed in the wake of this one, guided by a radio beam transmitted from this, the leading craft.

“What put the bug in Lieutenant Toy’s bonnet?” asked one of the two furtive seamen.

“How much do you think Lieutenant Toy knows about—well, to-night’s business, for instance?”

“I’ve got no idea how much he knows. All I know is that if he keeps on haunting me, he’ll learn too much!”

The other man laughed.

“What’re you laughing at?” the first man wanted to know.

“I was just thinking that Lieutenant Toy will probably learn what it feels like to die.”

The two separated and left the vicinity.

A moment after they had gone, a man swung down off the top of the awning under which the two men had met and secretly plotted death. He had heard every word that they had said.

This man walked away, headed toward the lower deck.

Lieutenant Bowen Toy went directly to his cabin, closed the door, locked it, and took out a revolver he had been carrying in an armpit holster. He went over to the mirror and looked at himself. He was pale. He held his hands up, first one, then the other.

“Shaking like an old woman!” he snapped. Then aloud: “I’ve got to do something!”

Lieutenant Bowen Toy went to his bag, opened it and got out a long-bladed kris, an ugly weapon which was evidently a souvenir of a visit to China. About to close the bag, his gaze fell upon another object in it. An idea seemed to seize him. He lifted the object out.

It was a book.

It was a thick book, full of fine print and intricate mathematical computations.

Lieutenants Bowen Toy stowed the kris inside his belt, where it would evidently serve as reserve weapon. He did not take his attention off the book, or, rather, off the name of the author, Clark Savage, Jr.

Abruptly, Lieutenant Toy left his cabin and walked, with his hand always on his automatic and his eyes wary, to the bridge, where he addressed the navigating officer.

“Where can Doc Savage be found?” asked Toy.

“Doc Savage is well known enough that a telegram addressed to him in New York City should reach him,” said the officer.

It was dark on the bridge, except for a subdued glow from the binnacle. The navigating officer had been intrigued by something queer in Lieutenant Toy’s voice. He now thumbed a cigarette lighter aflame and held it to throw light on Toy’s features. The utter terror he saw there startled him.

“Lieutenant!” he gasped. “What on earth is wrong?”

Lieutenant Bowen Toy, in his nervous excitement, drew the revolver, which had been in one pocket, and held it in his hand.

“I have just made an incredible discovery,” he gulped. “The entire United States navy is menaced! No telling how many ships will be destroyed! No telling how many men will be killed, before the thing can be stopped! I’ll give you the whole incredible story in a minute! But first, I’m going to send a radiogram and ask this Doc Savage to get started on the New York end of it!”

He bounded off, eyes darting warily from side to side, the gun held ready for defense.

The navigating officer stared after him and exploded, “I’ll be damned! Lieutenant Bowen Toy has gone nuts!”

The officer was blissfully unaware that imminent events would convince him that he himself, if anybody, was losing his mind.