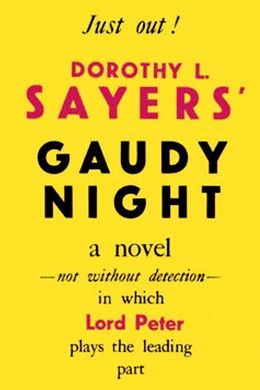 A must-read for fans of Agatha Christie’s Poirot and Margery Allingham’s Campion Mysteries, Lord Peter Wimsey is the immortal amateur sleuth created by Dorothy L Sayers. When Harriet Vane attends her Oxford reunion, known as the Gaudy, the prim academic setting is haunted by a rash of bizarre pranks: scrawled obscenities, burnt effigies, and poison-pen letters, including one that says, “Ask your boyfriend with the title if he likes arsenic in his soup.” Some of the notes threaten murder; all are perfectly ghastly; yet in spite of their scurrilous nature, all are perfectly worded. And Harriet finds herself ensnared in a nightmare of romance and terror, with only the tiniest shreds of clues to challenge her powers of detection, and those of her paramour, Lord Peter Wimsey.

Harriet Vane sat at her writing-table and stared out into Mecklenburg Square. The late tulips made a brave show in the Square garden, and a quartet of early tennis-players were energetically calling the score of a rather erratic and unpractised game. But Harriet saw neither tulips nor tennis-players. A letter lay open on the blotting-pad before her, but its image had faded from her mind to make way for another picture. She saw a stone quadrangle, built by a modern architect in a style neither new nor old, but stretching out reconciling hands to past and present. Folded within its walls lay a trim grass plot, with flower-beds splashed at the angles, and surrounded by a wide stone plinth. Behind the level roofs of Cotswold slate rose the brick chimneys of an older and less formal pile of buildings–a quadrangle also of a kind, but still keeping a domestic remembrance of the original Victorian dwelling-houses that had sheltered the first shy students of Shrewsbury College. In front were the trees of Jowett Walk and, beyond them, a jumble of ancient gables and the tower of New College, with its jackdaws wheeling against a windy sky.

Memory peopled the quad with moving figures. Students sauntering in pairs. Students dashing to lectures, their gowns hitched hurriedly over light summer frocks, the wind jerking their flat caps into the absurd likeness of so many jesters’ cockscombs. Bicycles stacked in the porter’s lodge, their carriers piled with books and gowns twisted about their handlebars. A grizzled woman don crossing the turf with vague eyes, her thoughts riveted upon aspects of sixteenth-century philosophy, her sleeves floating, her shoulders cocked to the academic angle that automatically compensated the backward drag of the pleated poplin. Two male commoners in search of a coach, bareheaded, hands in their trousers-pockets, talking loudly about boats. The Warden–grey and stately–and the Dean–stocky, brisk, bird-like, a Lesser Redpoll–in animated conference under the archway leading to the Old Quadrangle. Tall spikes of delphinium against the grey, quiveringly blue-like flames, if flame were ever so blue. The college cat, preoccupied and remote, stalking with tail erect in the direction of the buttery.

It was all so long ago; so closely encompassed and complete; so cut off as by swords from the bitter years that lay between. Could one face it now? What would those women say to her, to Harriet Vane, who had taken her First in English and gone to London to write mystery fiction, to live with a man who was not married to her, and to be tried for his murder amid a roar of notoriety? That was not the kind of career that Shrewsbury expected of its old students.

She had never gone back; at first, because she had loved the place too well, and a clean break seemed better than a slow wrenching-away; and also because, when her parents had died and left her penniless, the struggle to earn a livelihood had absorbed all her time and thought. And afterwards, the stark shadow of the gallows had fallen between her and that sun-drenched quadrangle of grey and green. But now–?

She picked up the letter again. It was an urgent entreaty that she should attend the Shrewsbury Gaudy–an entreaty of the kind that it is difficult to disregard. A friend whom she had not seen since they went down together; married now and remote from her, but fallen sick, and eager to see Harriet once again before going abroad for a delicate and dangerous operation.